More efficient EA211 petrol will replace the older 1.6 MPI; Petrol Rapid to get the option of a DSG for the first time. 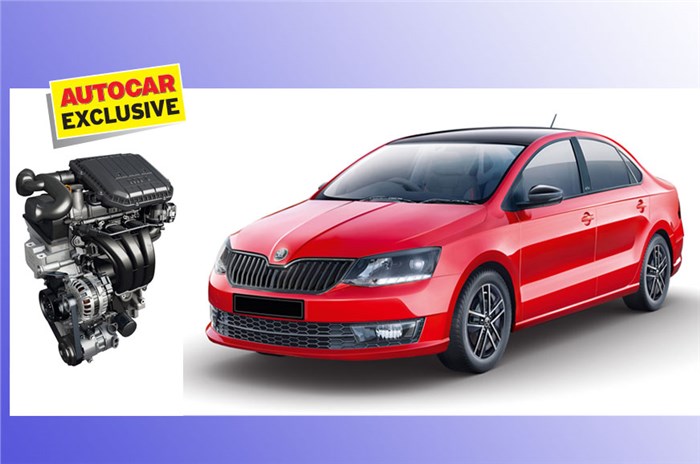 Last year, we reported that the Volkswagen Group's sophisticated 1.0-litre, three-cylinder turbocharged petrol engine will be made locally, given Skoda's plans to achieve over 90 percent localisation for its models under the ‘India 2.0’ project. Now, the Czech carmaker has confirmed that the Rapid sedan will be equipped with the 1.0-litre TSI motor, replacing the current 1.6 MPI (EA111).

Expected to be introduced around early next year, the new EA 211 series will be BS6-compliant and could effectively be the only powertrain on offer for the Rapid as VW's current 1.5-litre diesel will also not be upgraded to meet the stricter emission norms that will come into force from April 2020.

"We will not have a diesel in the Rapid but will replace that with a very efficient petrol engine – a 1.0-litre TSI. It is an extremely efficient engine giving a much better fuel economy than the current MPI, which has often been criticized a little for the fuel economy and efficiency," Zac Hollis, director – sales, service and marketing, Skoda Auto India told Autocar India in an interview.

Hollis also confirmed that the petrol Rapid, for the first time, will get an option of a high-tech 7-speed DSG dual-clutch unit, which will replace the old-school 6-speed torque converter automatic that was paired with the 1.6 MPI. At present, only the diesel Rapid gets the option of a DSG.

In international markets, the three-cylinder turbo-petrol model is available in two states of tune – 95hp/160Nm and 115hp/200Nm – and the Rapid is likely to get the more powerful of the two versions. If brought to India in the same tune, the 1.0 TSI in the Rapid will score higher on both power and torque compared to the 105hp and 153Nm torque output of the current 1,598cc petrol.

The new engine could also be equipped on Volkswagen's replacement for the Vento for India. The direct-injection unit is more compact, lighter and generates less friction, thus operating more efficiently.

While diesel will not be an option for VW and Skoda's small cars for India, the Czech carmaker is currently studying the feasibility of upgrading the 2.0-litre diesel to meet the BS6 emission norms. "The investments in BS6 for diesel will force the price of cars to go up in the future. For a customer, it actually that makes the business case for buying a diesel a lot less weaker than before. In my personal opinion, the market will move more towards petrol going forward," said Hollis.