Deliveries of the Skoda Karoq will begin in India starting May 6, 2020; only the 150hp,1.5-litre TSI engine mated to 7-speed DSG automatic will be offered in India. 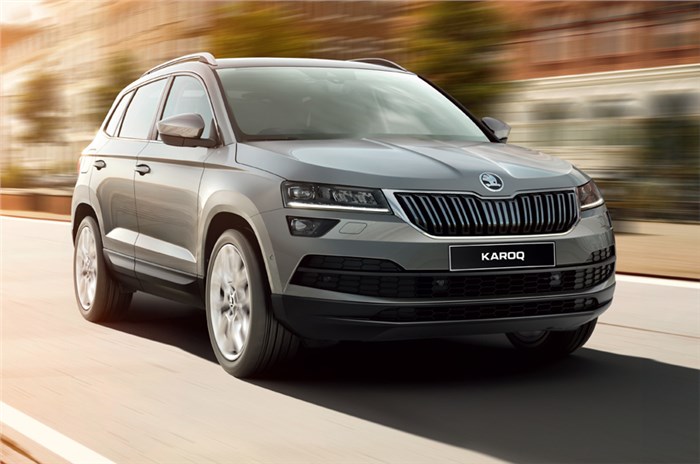 Having showcased it in India for the first time at Auto Expo 2020 in February, Skoda has now opened bookings for the Karoq SUV online and at its showrooms across the country, with the booking amount set at Rs 50,000. Deliveries of the Skoda Karoq will commence from May 6, 2020.

Based on the same platform as the Volkswagen T-Roc that was also showcased at Auto Expo 2020 – and set to be launched on March 18 – the Skoda Karoq’s near 4.4m length makes it about as large as the present midsize-SUV field. In spec and price, however, it’s the Jeep Compass that the Karoq will be closest to. The Karoq is being brought to India in completely built-up (CBU) form, with Skoda taking advantage of the 2,500-car import rule that allows a carmaker to bring in limited quantities of niche models without the need to homologate them.

Like the recently-launched Volkswagen Tiguan Allspace and the upcoming T-Roc, the Skoda Karoq will also be available only in a fully-loaded variant, and will get features such as a panoramic sunroof, the Virtual Cockpit digital instrument cluster, 17-inch alloy wheels, full-LED headlights, an 8.0-inch touchscreen infotainment system, dual-zone climate control, 12-way electrically-adjustable driver’s seat and nine airbags.

For now, the only engine option for the Skoda Karoq in India will be the 1.5-litre TSI turbo-petrol, developing a healthy 150hp and 250Nm of torque and mated to a 7-speed DSG automatic. 0-100kph time for this version is a claimed 9sec, with top speed rated at 202kph. There is a 4x4 option available internationally, but Skoda has chosen to bring only the front-wheel-drive model to India.

Though Skoda will be importing the Karoq as a CBU, the carmaker has said it will price the model competitively when it is launched in April 2020. It will slot in below the Kodiaq in Skoda’s India line-up, and above the production version of the Skoda Vision IN, which is set to be launched in the first-half of 2021.

What do you think would be an appealing price for the Skoda Karoq? Let us know in the comments.