A rear-wheel-drive version of the Taycan set the record for longest continuous drift, managing to go 42.171km. 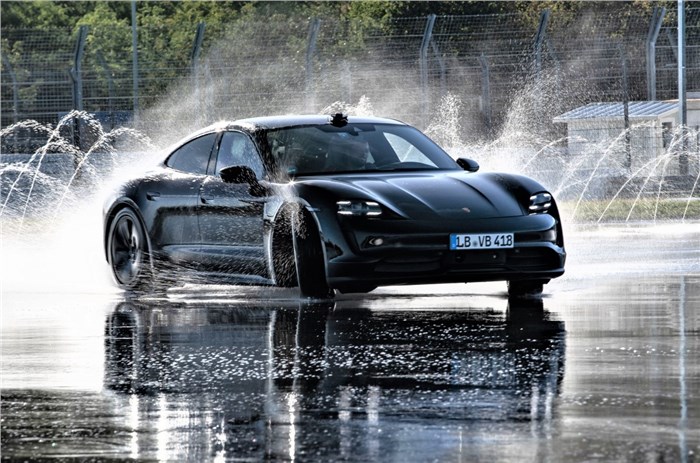 The Porsche Taycan has set a new world record of 42.171km for the longest continuous drift in an electric car. The attempt took place on the 'wet circle' skid pan at the Porsche Experience Centre (PEC) at Germany's Hockenheim race circuit and has been verified by Guinness World Records.

Porsche used a pre-production rear-wheel-drive (RWD) version of the Taycan during the attempt. This model is currently on sale in China but has not yet been confirmed for European or UK markets. Our sister publication Autocar UK expects an announcement on the Taycan RWDnext year.

The PEC’s chief instructor, Dennis Retera, was at the wheel for the record-breaking drift. Despite being used to the circuit and the car, drifting an electric car for that distance was not without its challenges for Retera. Although he reported it was easy to get it sideways initially, maintaining the drift while using as little power as possible was trickier.

“I concentrated on controlling the drift with the steering – this is more efficient than using the accelerator pedal and reduces the risk of spinning,” Retera said afterwards.

As a result, Retera managed to keep circulating for 55 minutes and 210 laps, until the Taycan’s battery was completely depleted.

A Guinness World Records official was on hand to present Retera with a certificate to officially acknowledge his achievement.

Porsche’s first EV was expected to be brought to India by the end of this year, though the launch of the Taycan has been postponed due to the COVID-19 pandemic. There’s no word on whether the rear-wheel-drive version will come to India, but the 625hp Turbo and 760hp Turbo S are expected to be offered. As we found out in our exclusive Porsche Taycan Turbo S review, it’s blisteringly quick, handles like a Porsche should and, with ample quick chargers and a decent sized battery, it’s usable too.