New Skoda Rapid is likely to be based on the MQB A0 platform; slated to be unveiled by end-2019. 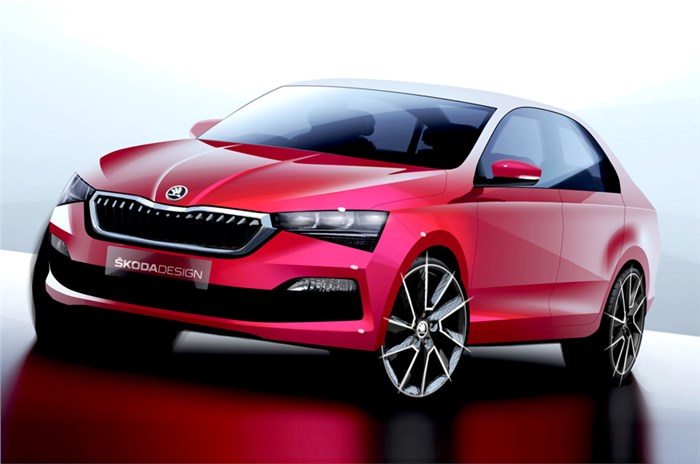 Czech carmaker Skoda has released an image, teasing the next-generation Euro-spec Rapid. The image is a design sketch of the sedan that is slated to launch in Russia by the end of the year.

The sketch shows a completely new design for the next-gen Rapid which is reminiscent of the Scala hatchback. There’s a redesigned, more muscular clamshell bonnet and triangular headlights like the Superb which are likely to be LED units. It also features Skoda’s signature ‘butterfly’ front grille. Further down, there’s a large air dam that extends from side to side with the fog lamps integrated within. It is expected that the next-gen Rapid for India will borrow some design cues from this model.

The new Euro-spec Rapid is likely to be based on VW Group’s MQB A0 platform which also underpins the Scala hatchback. In terms of size, the euro-spec Rapid will be larger than the Indian Rapid.

The current-gen Rapid in India is based on the PQ25 platform. However, the next-gen Indian Rapid, which is slated to launch in 2021, will be based on the India-specific MQB A0 IN platform. The new model will also get VW Group’s new 1.0-litre TSI petrol engine in place of the current model’s 1.6-litre petrol engine. The three-cylinder turbocharged motor is likely to make 115hp and 200Nm and will be paired with a 7-speed DSG automatic gearbox.

The current-gen Rapid has been on sale in India since 2011, with the model receiving a facelift in 2016 and reaching the 1 lakh production milestone in June this year. Apart from its VW sibling – the Vento – the Rapid also competes with the Hyundai Verna, Honda City, Maruti Suzuki Ciaz and the Toyota Yaris.

Along with the Euro-spec Rapid, Skoda will also unveil the next-gen Octavia in November this year.