Bookings for Honda’s fifth-gen rival to the Maruti Ciaz, Hyundai Verna, Skoda Rapid 1.0 TSI and Volkswagen Vento will begin mid-March. Prices will be announced in April. 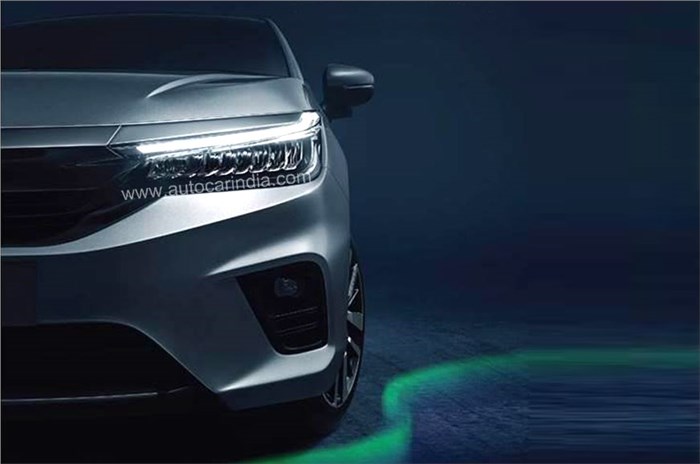 Honda Cars India has officially teased the next-gen Honda City before its launch in April 2020. With bookings for the fifth-gen City officially set to begin in mid-March, Honda has now released a teaser that reveals design details about the India-spec model.

The teaser image shows that the Thai-spec Honda City – which was revealed back in November 2019 – and the India-spec midsize sedan look more or less similar. However, a closer look tells you that the LED headlights and the 16-inch alloy wheels on the City for India are the same units from the higher-spec (and sportier-looking) City RS Turbo that is on sale in Thailand. The standard Thai-spec City gets projector headlights and 15-inch alloy wheels that have a slightly different design.

Other than minor cosmetic changes, the interior of the India-spec City is expected to be quite similar to the Thai-spec model. The new 8.0-inch touchscreen infotainment system, dials for the climate control system (instead of a touchscreen panel) and other features that were revealed on the Thai model are expected to make their way to India.

The current Honda City already has a BS6-compliant petrol engine, but the BS6-spec 1.5-litre diesel unit will only arrive with this fifth-gen model. In addition, the petrol engine is expected to get a mild-hybrid option soon.

Expect prices for the City to be a bit higher than the current car which is priced between Rs 9.91-14.31 lakh for the petrol, and between Rs 11.11-14.21 lakh for the diesel. The fifth-gen City will rival the Maruti Ciaz, Hyundai Verna, Skoda Rapid 1.0 TSI and the Volkswagen Vento.