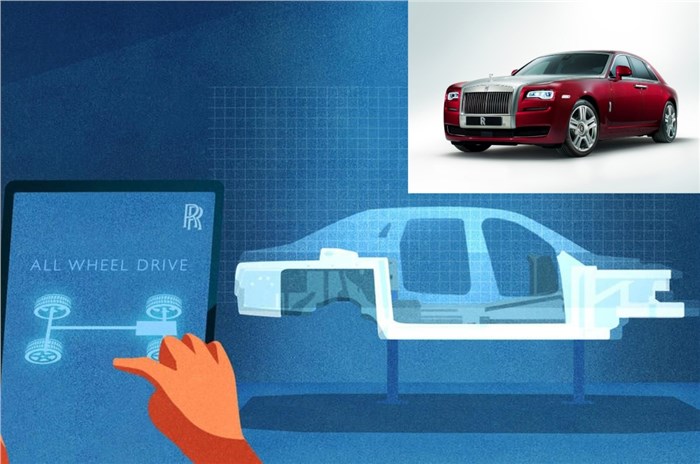 Rolls-Royce has detailed the extensive chassis developments for its next-generation Ghost luxury sedan that is set to be unveiled in the coming weeks.

The second-generation Ghost will follow the latest Phantom in featuring a system that steers the rear wheels as well as the front. It will depart from its bigger brother, however, by shunning rear-wheel drive for four driven wheels.

Rolls-Royce has also detailed a new suspension technology that will make its debut on the Ghost. Called the Planar system, it features what the firm describes as a "world-first technology" in the form of an upper-wishbone damper unit mounted above the front suspension assembly for "an even more stable and effortless ride." The system has taken three years to develop.

There's also the Flagbearer system, which uses cameras to read the road ahead and prepare the suspension, and Satellite Aided Transmission, which uses GPS data to pre-select the optimum gear for a corner.

The new Ghost switches to the latest version of the Rolls-Royce aluminium platform used by the Phantom and Cullinan SUV, and company boss Torsten Müller-Otvös noted the only components carried over from the successful original were the Spirit of Ecstasy figurehead and umbrellas.

Rolls-Royce is currently putting finishing touches to the second-generation Ghost, and company boss Müller-Otvös has attempted to smooth the path to the launch of the crucial machine in an open letter issued to prospective clients that tacitly addresses the challenge of launching an ultra-luxury car given the ongoing COVID-19 pandemic. The firm has also release the first official outline sketch teaser of the new Ghost.

In the letter, Müller-Otvös notes that since it was launched in 2009, the original Ghost has become the most successful model in Rolls-Royce’s long history, which he attributed to it being a car that owners could enjoy driving or being driven in.

He added, “They also appreciated the car’s pared-back simplicity, or as they put it, ‘a slightly smaller, less ostentatious means to own a Rolls-Royce.’ Going further, our clients expressed an ardent desire for even more minimalism in design.”

Müller-Otvös said the firm’s research showed that trend reflects a wider movement among luxury customers towards what Rolls has termed ‘Post Opulence’ – a move “towards luxury objects that celebrate reduction and restraint.”

The first-gen Ghost had been on sale in our market for almost a decade, and the new model is also expected to make its way to India. When launched, the new Ghost will compete against other high-end luxury sedans like the Bentley Flying Spur and the upcoming, next-gen Mercedes Maybach.