Bookings for the flagship luxury sedan are already underway at Audi dealerships. 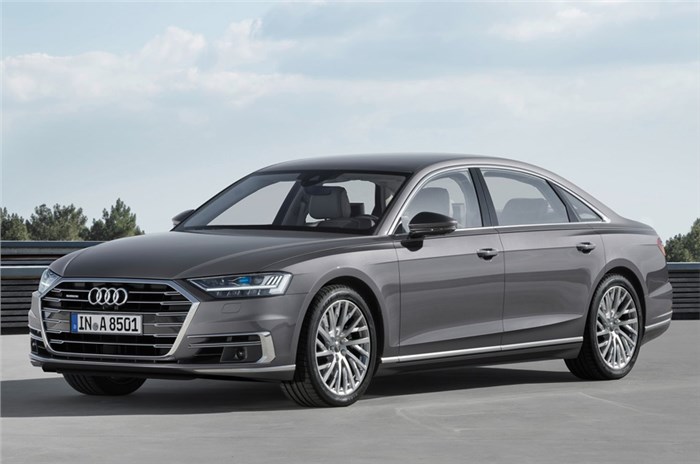 Audi’s fourth-generation A8 L sedan, which made its world premier back in 2017, will see its India launch this year, with the German marque confirming its flagship luxury sedan’s arrival in the country by end-2019. At the inauguration of the brand’s new dealership in Gurugram, Rahil Ansari, head of Audi India, said, "We are launching the A8 by the end of the year. We are open for bookings and already have some bookings confirmed."

As with the previous-gen car, the new sedan continues to be available globally in two configurations – standard (A8) and long-wheelbase (A8 L), though it is the latter that is expected to make its way to our market. Based on Volkswagen Group’s MLB Evo platform, the updated A8 L measures 5,302mm in length, 1,945mm in width and 1,488mm in height, which is 37mm longer and 17mm taller than the outgoing model, albeit 4mm narrower. At 3,128mm, the wheelbase has gained 6mm as well.

Compared to the outgoing model, the upcoming A8 gets a comprehensive makeover. In line with Audi’s latest design language, it sports a prominent hexagonal grille up front, flanked by sleek HD Matrix LED headlamps, and the neatly designed rear end features slim OLED tail-lamps that are connected by a full-width light bar.

The cabin adopts a clean design language, with an extensive use of digital surfaces. In addition to Audi’s Virtual Cockpit instrument cluster display and a 10.1-inch infotainment touchscreen, there is also an 8.6-inch curved display in the centre console for operating various climate control and seating functions. Though multi-function heated and massage seats are part of the package as expected, a foot massager for the rear passenger is an interesting novelty over the A8’s rivals. Speaking of novelty, the A8 also features Level 3 autonomous driving tech, but it might not be available on the India-spec model.

Globally, the Audi flagship is available with a variety of powertrains. To begin with, there are two 3.0-litre, V6 turbocharged petrol and diesel engines that put out 340hp and 286hp, respectively. There’s also a 460hp, 4.0-litre, twin-turbo petrol V8 on offer. Completing the model range is a W12 engined version and a plug-in hybrid.

We expect the new A8 L to come to India with either a 3.0-litre V6 diesel or a petrol variant, with both motors featuring mild-hybrid tech.

Audi is expected to bring the A8 to our country as a full import, at an estimated price of Rs 1.5 crore (ex-showroom). When it does arrive, the premium saloon will go up against the likes of the recently facelifted BMW 7 Series, Mercedes S-class, Lexus LS500h and the Jaguar XJ.