Audi has revealed petrol-electric versions of the A6, A7, A8 and Q5; badged as TFSI e, the PHEVs are claimed to have a 40km electric-only range. 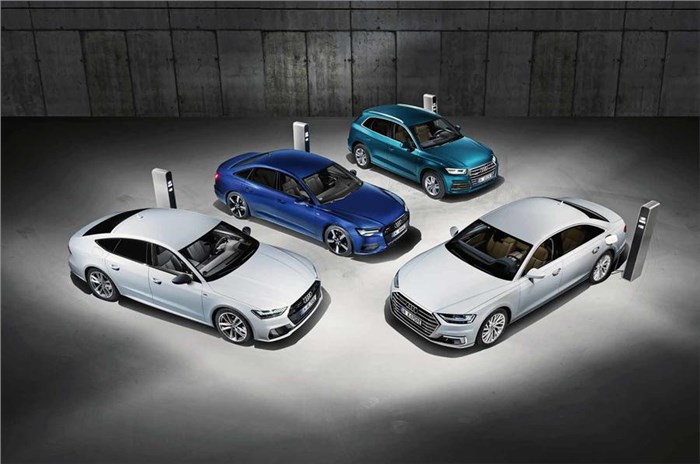 Audi has taken the wraps off plug-in hybrid versions of the A6, A7, A8, and Q5 before the models are showcased at this year’s Geneva motor show. These cars will receive ‘TFSI e’ badges as Audi will not be using the e-tron moniker for the PHEVs. Audi has stated that the e-tron badging will only be used on all-electric vehicles.

Audi has also stated that the ‘TFSI e’ PHEVs will be capable of doing more than 40km of electric-only range on the newer, stricter WLTP test cycle.

The German carmaker’s range-topping PHEV will be the A8 L 60 TFSI e quattro. It will feature a 3.0-litre V6 petrol engine mated to a synchronous electric motor, and a 14.1kWh battery pack. The combined system output is 450hp and 700Nm of torque. The transmission on offer will be an 8-speed Tiptronic unit.

The A6, A7 and Q5 PHEVs will all offer identical combined power outputs of 300hp and 450Nm of torque in the entry-level 50 TFSI e ‘comfort’. However, a higher performance 55 TFSI e (similar to the S-Line on regular models) offers 368hp and 500Nm of torque. All the TFSI e 55s will also get sportier styling and a suspension setup favouring driving dynamics. The performance and efficiency figures are yet to be revealed by Audi, though they are expected to be announced once these cars are revealed at Geneva.

Audi has said that it will be utilising technology from the e-tron for the PHEVs powertrain, and also claims that the regenerative braking of the PHEVs will be able to recover up to 80kW of energy under maximum load.

Audi has not announced the new PHEVs pricing or its intentions to bring them to the Indian market as of now. It is worth mentioning that Audi India has faced an 18 percent decline in sales last year. Despite this, it will be launching the all-new A6 and A8, as well as the refreshed R8 in India this year.