The year initially looked promising but a clutch of factors in the second half dampened sales; Carmakers line up new models to reinvigorate numbers in the New Year. 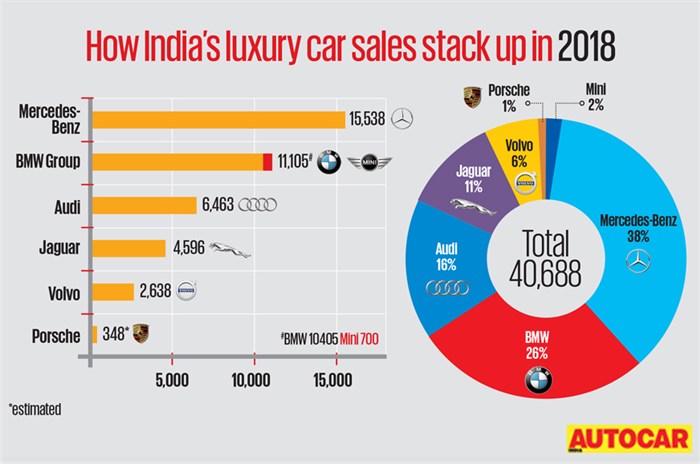 Even though their global performance has been on the peppier side in 2018, luxury carmakers in India found last year to be a challenging one. Compared to developed markets where luxury vehicles typically account for around 5-6 percent of the overall market, their share in India is a little over one percent.

Luxury vehicle manufacturers in India ended calendar year 2018 on a tepid note as a number of factors such as high import costs, depreciation of the rupee and a liquidity crunch impacted demand considerably. Overall volumes are estimated to have totalled 40,688 units, up barely three percent from  calendar year(CY) 2017’s 38,989 units.

Although CY2018 kicked off on an upbeat note with healthy growth in the first half, volumes came under pressure in the second half as the macroeconomic forces came into play. And, after a Supreme Court decision that made it mandatory for all car owners to take three-year motor insurance cover from September 1, car prices turned dearer.

"Although volumes have increased, growth could have been even higher if not for challenges such as change in duty structure and lending issues. Because of the liquidity crisis at non-banking financial companies (NBFCs), lending has become very difficult, not just for the customer but also for dealers who use the money to purchase vehicles from manufacturers. As a result, the overall atmosphere is not currently conducive. It will take some time for the market to deal with the fact that this is the new normal," a senior executive at a luxury carmaker told Autocar India.

The pecking order remains the same as in 2017 with Mercedes-Benz India leading the charge, followed by its German rivals BMW and Audi. They are followed by British carmaker Jaguar Land Rover, Swedish carmaker Volvo and performance carmaker Porsche.

In fact, the slowdown in growth also affected overall luxury vehicle sales in India since Mercedes accounts for a large share of the total market. The company ended 2018 as the country's highest-selling luxury carmaker for the fourth straight year with a 38 percent market share.

“We are satisfied with our sales performance in 2018 despite facing strong macroeconomic headwinds in H2 (second half), resulting in low consumer sentiment that posed significant sales challenges. We, however, made a strong comeback in the Q4 period (October-December) and were able to achieve a year-on-year growth," said Martin Schwenk, MD and CEO, Mercedes-Benz India.

Growth was led by the long-wheelbase E-Class, which remained the highest-selling model for the brand in 2018. Mercedes also witnessed healthy demand for the C-class sedan; the GLC was the brand's highest-selling SUV.

Mercedes-Benz India aims to sustain a strong product momentum with plans to launch around 10 models in 2019, beginning with the V-Class MPV on January 24, 2019.

BMW Group India managed to keep the momentum going as it sold 11,105 vehicles (including MINI), registering YoY growth of 13 percent. Of the total, BMW models accounted for 10,405 units, up 11 percent. BMW said that growth was led by the 5 Series and the 6 Series GT. The German carmaker also saw its locally-assembled SUV range contribute over 50 percent to its overall sales with strong demand for the X3. It also confirmed that the new X4 and X7 will be locally assembled at its Chennai plant.

BMW is readying a new model assault for India this year which includes 10 new models and two facelifts. Its 2019 innings is likely to commence with the launch of the X4 and will include the new 3 Series, the new X5, X7, X6, X4M, X3M, Z4, M8 Coupe, M8 Cabriolet, 7 Series facelift and X1 facelift (in no particular order).

The Mini brand sold 700 units in 2018, posting a growth of 66 percent, albeit on a low base. The Countryman and the three-door hatchback accounted for 60 percent of overall volumes.

2018 was a challenging year for Audi India as sales fell 18 percent YoY to 6,463 units (2017: 7,876 units). It was the second consecutive year in which the brand struggled to find traction after being plagued by the GST cess hike in 2017, when it posted two percent growth. The carmaker attributed this drop in sales to the closure of its largest dealership, located in Delhi NCR, where it typically records maximum deliveries.

It also grappled with a delay in getting models to the market following Europe's shift to the Worldwide Harmonised Light Vehicle Test Procedure (WLTP) for emissions and fuel consumption. The new test procedure came into force on September 1, 2018 and replaced the New European Driving Cycle (NEDC) procedure. It includes real-world testing and a greater focus on individual models, thereby having an impact on the time to the market for a few manufacturers globally.

Audi India had fewer launches in 2018 as compared with its peers. It introduced Q5 petrol and diesel, RS5 Coupé and two special-edition models each, for the Q3 and Q7.

"2018 was surely a challenging one for the auto industry in India, especially in the second half of the year. The luxury segment was under pressure owing to financial market development, changing customer sentiment and changes in tax policies. We faced some unforeseen business challenges during the year, which led to reduced deliveries for 2018," said Rahil Ansari, Head, Audi India.

Despite the drop in numbers, Audi India expects to get the momentum going this year and has lined up models like the all-new A8 and the updated R8 for launch. It is even planning to introduce the all-electric E-tron in India.

For Jaguar Land Rover India, 2018 was a record year as it sold 4,596 units, its highest ever in a year, posting growth of 16.23 percent (2017: 3,954 units). Like many carmakers in the country, SUVs led the growth charge for JLR as well, accounting for over 50 percent of the volumes. Growth was driven by models such as Discovery Sport, Range Rover Evoque, and Jaguar F-Pace as well as the XE and XF.

“The auto industry faced strong headwinds in 2018, especially in the second half with tight liquidity conditions, increased upfront insurance costs and increased lending rates. Despite that, the growth of Jaguar Land Rover in India has been very encouraging," said Rohit Suri, president and MD, JLR India.

The Swedish carmaker is expected to launch the all-new S60, which will take on the new BMW 3 Series, Audi A4 and Mercedes-Benz C-class, by end-2019.  It recently announced plans to locally assemble the plug-in hybrid variants of its flagship SUV, the XC90, at its plant in Bangalore by end of 2019.

Additionally, the company also said that plans are underway to introduce four new plug-in hybrids over the next three years, along with a new all-electric model soon after its international launch.

German performance car brand Porsche is estimated to have sold 348 units in 2018, down 20 percent from 435 units sold in 2017. During the year, Porsche launched the third-generation Cayenne in India, but without the option of a diesel as it decided to do away with diesel engines for good. This is likely to have hurt sales as diesel was traditionally the mainstay of the Cayenne range in India. The brand is banking on the petrol and hybrid variants to generate enough demand. It is now gearing up to launch the Macan facelift around February 2019.

Market observers are cautiously optimistic about sales prospects in 2019 as the luxury vehicle segment continues to face a challenging environment. Case in point: growth rates for Mercedes, BMW, Audi, JLR India and Porsche dipped when compared to 2017, a year in which they grew at 16 percent, 25 percent, 2 percent, 49 percent and 10 percent, respectively. Automakers will hope for the best, fingers firmly crossed.