Following the new Santro, Hyundai is likely to equip the Grand i10 and the Xcent with its new in-house-developed automatic gearbox. 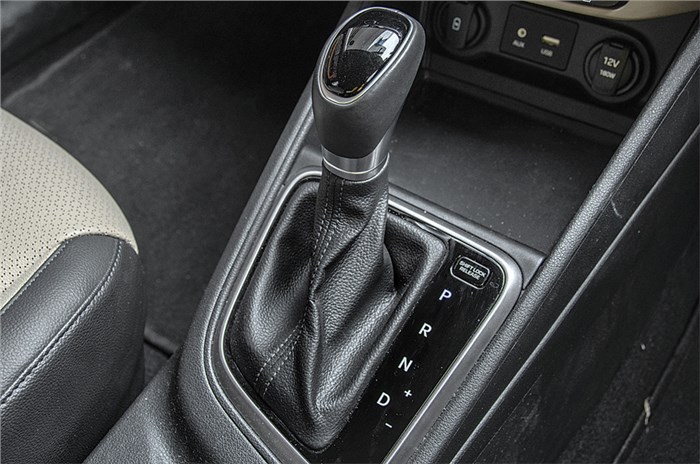 The Hyundai Verna's automatic gear used for representative purposes only.

Hyundai foresees a strong demand for automated manual transmission or AMT-equipped versions of the soon-to-be-launched Santro. So much so, that it has plans to equip other models with this technology too.

Speaking to Autocar India at the Santro media unveil at its Chennai plant, Y.K. Koo, MD and CEO Hyundai Motor India indicated the same saying: “After the all-new Santro, we may consider using this AMT on our other products as well”.

Our sources tell us that the Grand i10 and Xcent, which are currently offered with the option of torque converter automatic gearboxes, will be the first in a line of Hyundais to make the switch to AMTs. However, AMT-equipped Grand i10s and Xcents are still about a year away as adaptation and testing is yet to begin.

Unlike quite a few manufacturers that use vendor-developed AMT kits, Hyundai chose to develop the system on its own. And the Korean firm believes that the decision to use electrical actuators instead of the more common hydraulic ones is the right one as the solution offers better gear change control and also improved service life.

Koo also added that in respect to the Santro they expect to see a bigger demand for the AMT in metros. “In metros, the AMT demand is much higher, we expect it to be around 40 to 45 percent while nationally it should be about 25 percent,” he said.

In addition to tapping into the rising demand for automatics, Hyundai is also banking on the new Santro to strengthen its footing in the country's competitive automotive segment. "When we phased out the first Santro in 2014, we lost our volume in the tall boy segment. So we are very happy to re-enter that popular segment with the all-new Santro," Koo signed off.

Hyundai Santro AMT to be offered in two variants