The most powerful version of the Mercedes-AMG EQE sprints from 0-100kph in just 3.3 seconds despite weighing over 2,500kg.

Mercedes-AMG recently unveiled the all-new EQE 43 4Matic and EQE 53 4Matic+ performance sedans. As the names suggest, the EQE 43 and EQE 53 are based on the Mercedes-Benz EQE 350 that was introduced at last year’s Munich motor show.

The new four-wheel-drive performance saloon duo joins the larger and more powerful Mercedes-AMG EQS 53 in a widened range of models based on the German carmaker’s dedicated EVA electric car platform.

Building on the rear-wheel-drive Mercedes-Benz EQE 350, the EQE 43 adopts a second electric motor on the front axle. Similar to that used by the EQS 450, the synchronous unit boosts the new electric-powered four-door’s output by 183hp and 330Nm to a combined 475hp and 872Nm. 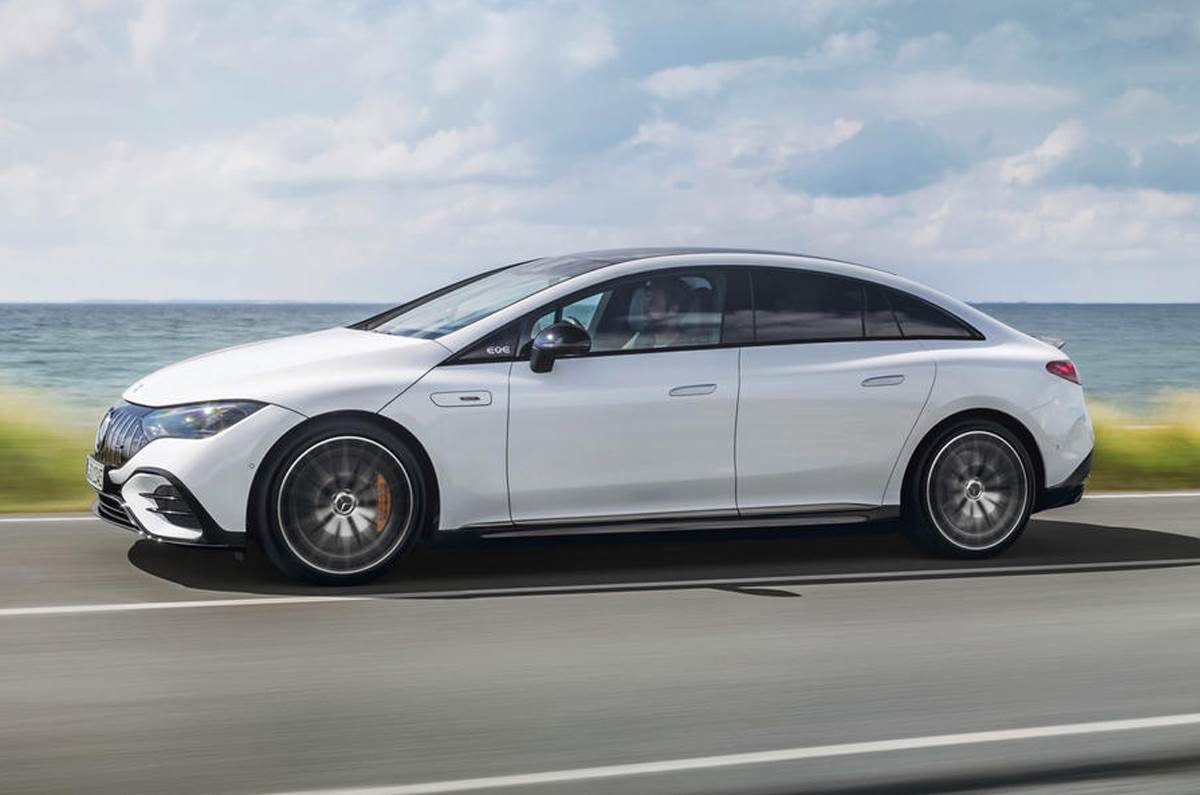 The EQE 53 ups the ante further with AMG-specific electric motors that feature adapted windings, a higher current and a water lance for additional cooling effect, among other improvements. It develops a combined 625hp and 950Nm of torque as standard, or an even stronger 687hp and 1,000Nm with an optional AMG Dynamic Plus Package.

This provides the most powerful of AMG’s EQE models with 7bhp and 150Nm more than its prime electric-powered performance rival, the Porsche Taycan Turbo, whose twin electric motors develop a combined 680hp and 850Nm.

Drive is channelled through a single-speed gearbox on each motor to all four wheels, providing both the EQE 43 and EQE 53 with a fully variable apportioning of power. A new heat exchanger has been added, allowing the transmission oil to be preheated in cold temperatures for improved efficiency. 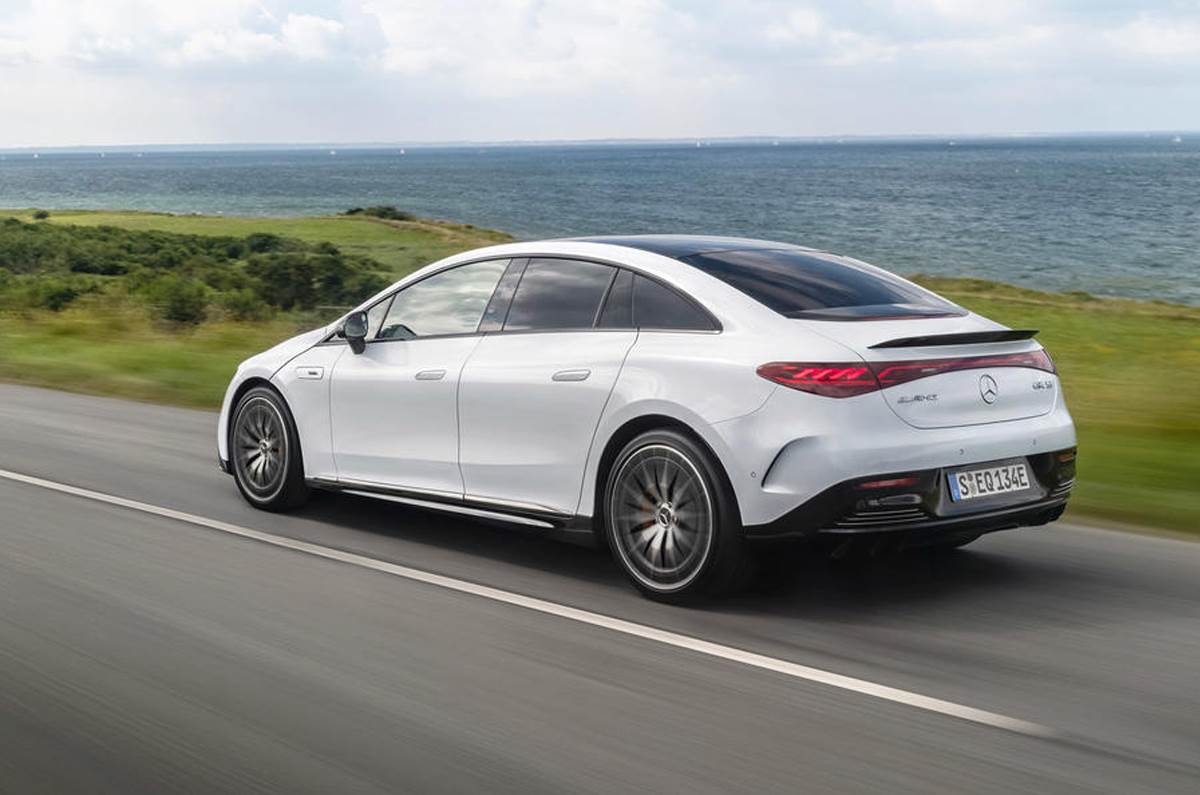 Both models feature four driving modes – Slippery, Comfort, Sport and Sport Plus. The EQE 53 offers an additional Race Start mode in combination with the AMG Dynamic Plus Package. 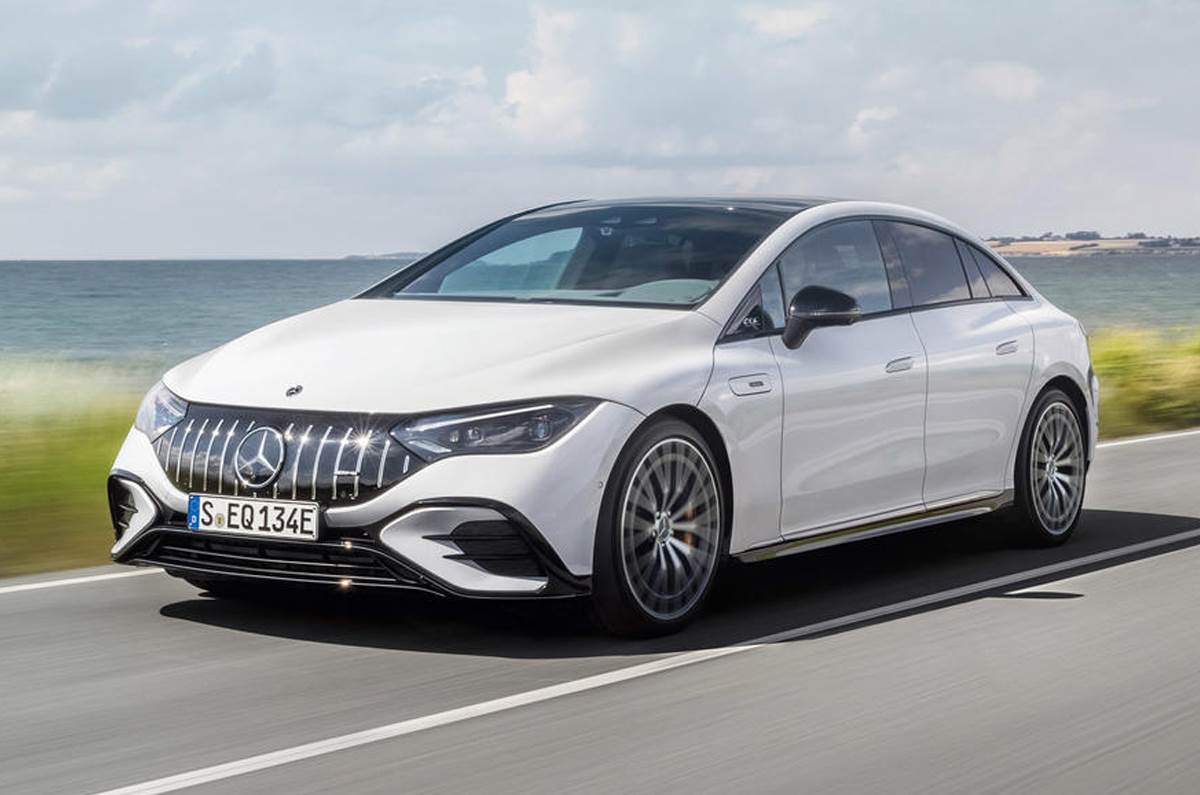 A 400V, 90.6kWh battery with 360 individual lithium-ion cells are featured on both models. It can be charged at 11kW or 22kW on an AC system and at up to 170kW on a DC system, with the latter claimed to provide an additional 180km of range in 15 minutes. Official range claims are yet to be revealed, although AMG says we can expect “something in the region of 500km”.

As well as upping the performance of the electric motors, AMG has given its new EQE-based models upgraded air suspension, which features a new rear-axle carrier with stiffer bearings and less play than that used by the EQE 350. Further developments include AMG-specific wheel carriers and suspension links, larger diameter anti-roll bars and adaptive damping properties.

The EQE 43 and EQE 53 also ride 5mm lower than the EQE 350. For added aerodynamic efficiency, the suspension lowers a further 15mm in Sport and Sport Plus modes, and, at 120kph, in Comfort mode.

Mercedes’ second EQ offering in India will be the EQS flagship sedan that will be locally manufactured and go on sale later this year. In fact, Mercedes-Benz has as many as 10 new model launches lined up for launch this year, including the EQS. We will also see the new Mercedes-Maybach S 580 – the stretched, more luxurious version of the S class – to be launched in March 2022. From the high-performance AMG stable, the Mercedes-AMG GT Black Series will be launched, while the GT 63 S e-performance and all-new SL roadster could potentially join those ranks.

Do you think the Mercedes-AMG duo can take the competition to the Porsche Taycan? Let us know in the comments below.