Maybach S-class to pack in a plush cabin, more space, and an additional kit over regular S-class. S 580 is expected to be locally assembled. 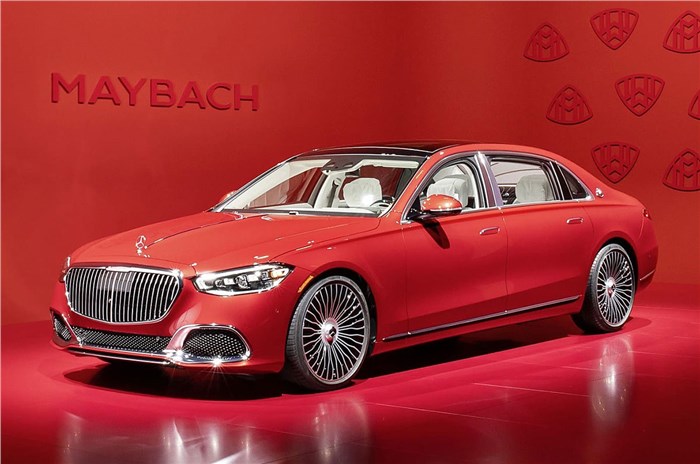 The new Mercedes-Maybach S-class is set to launch in India on March 3. Like the previous-gen model, the new Maybach S is based on the new V223 S-class with a 180mm longer wheelbase and an even more plush cabin.

As with its predecessor, the new Maybach S-class doesn’t stray far from the standard S-class in terms of looks. Longer wheelbase and larger rear door aside, the luxury limousine features a number of Maybach specific cosmetic tweaks, including the signature Maybach grille, unique wheel designs, additional chrome and the Maybach logo on the C-pillar.

The cabin design too is in-line with the regular S-class with Maybach specific upholstery, trim inserts and graphics for the touchscreen and digital instrument cluster. Expect the Maybach S-class to be available in a four-seat layout with the individual rear seats seperated by a full-length floor console. As with the regular S-class, the chauffeur package – adds powered rear seats, seat massage and a boss mode to stretch out on the co-driver side – will be fitted as standard.

In terms of equipment, expect the Maybach S-class to pack in all the bells and whistles from the regular S-class along with some additional kit and a lengthy list of options.

The range-topping S 680, meanwhile, is powered by a 6.0-litre V12 pushing out 612hp and a mammoth 900Nm of torque. Both engines are paired with a 9-speed automatic gearbox as standard. As with the regular S-class air-ride, suspension is standard, with rear-wheel steering also expected to be offered.

As with the past iteration of the Maybach S-class, Mercedes is expected to locally assemble the V8-powered S 580 alongside the standard S-class at its Chakan facility. It remains to be seen, however, if the model will be locally assembled from the outset or with initial units being CBU imports.

The high-spec S 680, meanwhile, is expected to be available as a CBU import.

In terms of pricing, expect the Maybachs to cost a notable premium over the standard S-class with prices expected to be north of Rs 2 crore. The new Maybach S-class will be the company’s second new Maybach model to arrive in India in the last 12 months following the Maybach GLS, which arrived in June 2021.