Maruti Suzuki has achieved a 15 percent year-on-year increase in units dispatched via freight trains in FY2020. 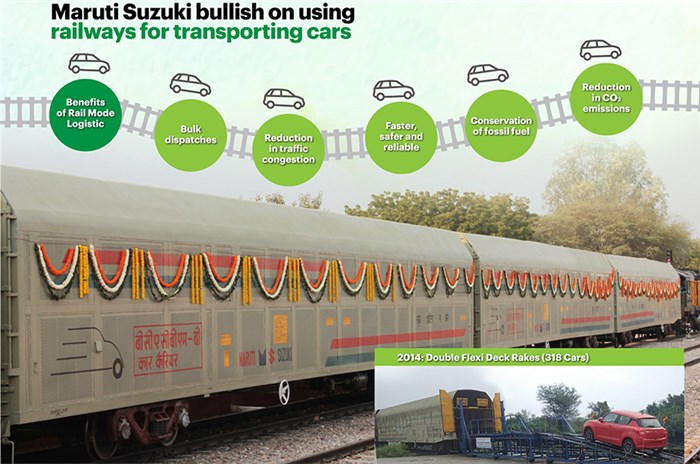 India’s leading carmaker Maruti Suzuki has been driving towards sustainability in the mobility ecosystem in more ways than one. While it was the first automaker to announce its exit from making diesel-powered cars in the BS6 regime, it has been making strides when it comes to adopting environment-friendly means to transport new vehicles produced at its plants to dealerships across the country.

Starting March 2014, the company began using rail transportation, with its first despatch taking place through double-decker flexi-deck rakes of the Indian Railways. Since then, rail transportation has played a crucial role in its finished goods logistics operations and Maruti Suzuki says it has transported over 6,70,000 cars with a CAGR of 18 percent.

While India’s dense railway network has been allowing the company to cut down on the time taken to transport its newly built vehicles from its plants to dealerships in various cities across the country, it has also served to significantly reduce its carbon footprint by offsetting nearly 3,000 MT of CO2 emissions, as claimed by Maruti Suzuki.

The carmaker, in the initial days, used the single-deck rakes, which were christened New Modified Goods (NMG) and could only handle 125 cars each. As the volumes started growing, it needed to shift to high-capacity dedicated wagons, and eventually saw the Indian Railway’s design arm – Research Design and Standards Organisation (RDSO) – come up with a new design called BCACM. These double-decker rakes doubled the vehicle-carrying capacity to 265 cars.

Maruti Suzuki also became the first automaker in the country to obtain the Automobile Freight Train Operator (AFTO) license, which allows private firms to fabricate and operate high-speed, high-capacity auto-wagon rakes on the Indian Railway’s network. As a result, the prototypes for the BCACBM wagons were fabricated by Maruti Suzuki and later got approved by the RDSO for being manufactured.

The new design BCACBM rakes were more flexible and could accommodate all models in the company’s portfolio. The capacity of the BCACBM rakes increased from 265 to 318, a 20 percent uptick, while they were also designed to operate at a reasonably high speed of 95kph, highest for any goods train in India.

Maruti Suzuki says that, till date, 27 such high-speed trains have been inducted by the company as well as its service providers for transportation of its cars across the country.

Suzuki Jimny to be withdrawn in multiple European markets