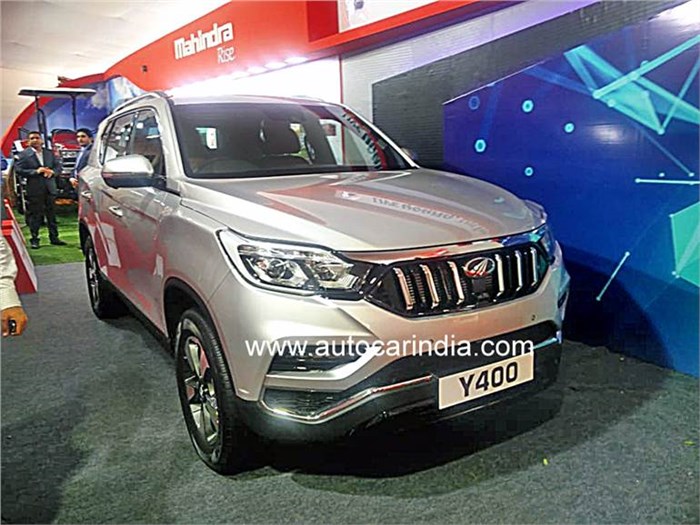 Expected to launch in the coming weeks, here are the key things to know about Mahindra’s upcoming flagship SUV.

Mahindra brought the SsangYong Rexton to India in 2012, though it didn’t make a large impact in its segment, losing out to full-size seven-seat rivals like the Toyota Fortuner and Ford Endeavour in terms of sales. The game has moved ahead now, with new arrivals like the Skoda Kodiaq and Mitsubishi Outlander being introduced this year. Mahindra hopes to change all this with the new-gen Rexton when it arrives in the next few weeks, before the end of the 2018 festive season. Here’s what you can expect from what will be Mahindra’s new flagship SUV, currently codenamed Y400:

It is larger than its predecessor

The next-gen Rexton gets an all-new body-on-frame setup that is said to be stiffer than the outgoing model’s while lowering overall weight. Its dimensions have also expanded by 95mm in length (4,850mm), 60mm in width (1,960mm), 40mm in height (1,825mm) and 30mm in the wheelbase (2,865mm), which translates to more space on the inside. While the model for international markets is a five-seater, the India-spec SUV will be able to seat seven.

In terms of styling, the new Rexton gets an all-new design, which helps make the SUV a decent looker, thanks to projector headlamps with LED daytime running lamps (DRLs), a slim hexagonal grille, LED fog and cornering lamps at the front and 20-inch alloy wheels, with thicker rubber.

It’s got a heavily updated cabin

The insides of the upcoming flagship are also all-new and are decidedly plush. The dashboard and steering units are a completely different design and the seats and door panels are more upmarket thanks to the leather upholstery. Equipment levels will also improve considerably with the addition of a 9.2-inch HD screen with Apple CarPlay and Android Auto (likely to come to India as well), a 360-degree camera, a 7.0-inch LCD instrument cluster and a smart tailgate. A larger sunroof is also expected to feature.

It’s got a new powertrain

The Rexton currently on sale in India has a 2.7-litre, five-cylinder diesel motor in 164hp and 186hp states of tune, which comes mated to 5-speed manual and automatic transmissions. The new model is powered by a new 2.2-litre, four-cylinder diesel engine that produces 1hp more (187hp at 3800rpm) and 18Nm more (420Nm at 1600-2600rpm). The motor is paired to a new 7-speed automatic that will send power to all-four wheels on higher-spec versions; rear-wheel drive will be standard on lower trims.

Other rivals in the segment include the Skoda Kodiaq (Rs 34.84 lakh*) and Mitsubishi Outlander (Rs 31.95 lakh^), which are priced far above their competition, though are only available in a single fully-loaded trim.

It’s market name is yet to be confirmed

Unlike the current model, the nose will sport a Mahindra badge for better brand recall (compared to the virtually unknown SsangYong badge) and the Rexton name will also be dropped to better differentiate it from the previous-gen model. While there has been plenty of speculation on the Y400’s official name, the XUV700 nameplate has been put forward the most. Taking into account that this new model will sit above the XUV500 in Mahindra’s India line-up, the XUV700 name makes sense.