Based on our real world tests, here’s a look at the all-new Mahindra Thar’s mileage figures. 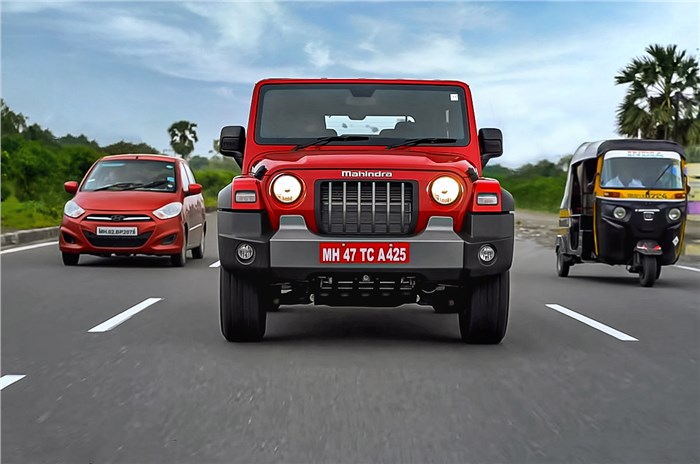 The all-new Mahindra Thar has caught the fancy of buyers with its butch appeal and more practical nature this time around, and it has been a runaway success in India, with waiting periods extending to over 10 months. Although fuel efficiency will not be a factor that will influence the buying decision of prospective Thar owners, it is an aspect that can’t be completely ignored at a time when fuel prices are surging. So here are the indicated fuel economy figures of the all-new Mahindra Thar, which you can expect in the real world.

What is the real world fuel efficiency of Mahindra Thar?

We put the petrol-automatic and both gearbox iterations of the diesel to test. In our standardised tests, the diesel-manual proved to be the most frugal, with a city and highway efficiency of 12kpl and 12.6kpl, respectively. Not too far behind was the diesel-automatic, returning 11.3kpl and 11.5kpl in city and highway conditions, respectively. The petrol-automatic, as expected, proved to be the thirstiest of the lot, with a fuel efficiency of 7kpl (city) and 9.3kpl (highway).

There are several factors that affect the Thar’s fuel efficiency. It is quite heavy to begin with, tipping the scales at 1,735kg for the petrol-automatic, 1,774kg for the diesel-manual, and 1,783kg for the diesel-automatic. Due to its heavy construction, a large-capacity engine, and the absence of an Economy mode or engine start/stop technology, city efficiency isn’t very strong.

Out on the open road, its gear ratios come across as well-judged and it is a lazy sipper while cruising at steady speeds. For reference, at 100kph, the engine is spinning at 2,100rpm, 1,700rpm and 1,700rpm, in the sixth gear of the diesel-manual, diesel-automatic and petrol-automatic, respectively. What hampers its highway efficiency is actually its boxy, non-aerodynamic shape; in other words, the body witnesses a high degree of wind resistance at speeds, so the engine needs to work that much harder to counter the wind drag, as a result its highway fuel efficiency isn’t much higher than in the city. A key observation is that the Thar is much more fuel efficient while cruising at speeds below 90kph, than when maintaining a steady 90-110kph.

Before our real world fuel efficiency test we fill the tanks of our test cars till the brim and maintain tyre pressures based on the manufacturer’s recommendation. These cars are driven in fixed city and highway loops and we maintain certain average speeds. To keep a check on any untoward variation, we always have a reference car driving along, one that we’ve already tested in the past; periodic driver swaps further neutralise variations in driver patterns. At the end of each cycle, we calculate efficiency by tanking them up till the brim. Throughout our test there is only one person in each car, running the air-con and other electrical like the audio system, indicators and wipers when required, just like how a regular user would. We take pride in our testing data which isn’t merely consistent, but also gives users an accurate indication of what they can expect in the real world.