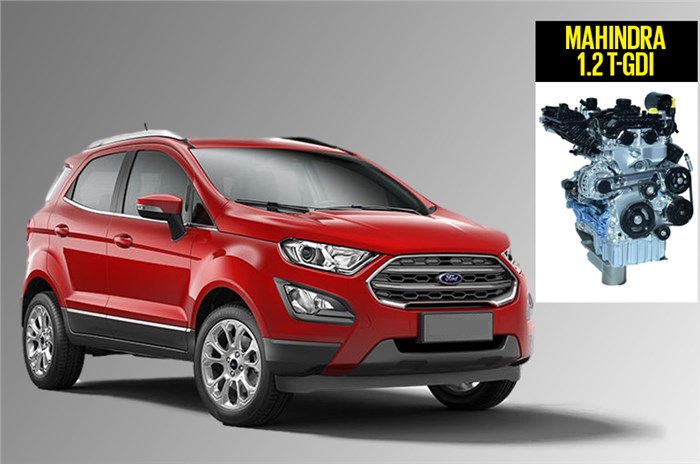 Mahindra and Ford signed an agreement back in 2017 with an objective to collaborate in areas like connected vehicle technology, electrification, and product development. One of the first products to come out of this collaboration will be a Mahindra-powered version of the Ford EcoSport that is now confirmed for launch in the first quarter of 2021.

As we had reported in June 2019, Ford will make use of Mahindra’s 1.2-litre T-GDI engine as a replacement for the 1.0-litre EcoBoost engine in the EcoSport. The 1.2-litre T-GDI (Turbocharged Gasoline Direct Injection) petrol unit belongs to Mahindra’s new mStallion family of engines. Codenamed G12, the BS6-compliant engine produces a healthy 130hp and 230Nm of torque. While a 6-speed manual is expected to be standard, Ford is also likely to introduce a dual-clutch automatic option.

This means the Mahindra engine is 5hp and 60Nm more powerful than the now-discontinued 1.0-litre Ford EcoBoost engine. Ford’s 1.0-litre EcoBoost engine made a name for itself for the performance it offered but its high price and low fuel economy did limit its appeal, with Ford finally axing the engine from the EcoSport lineup.

Before the EcoSport T-GDI hits the market, the Mahindra engine will make its debut in the XUV300 compact SUV this April. As for the competition, aside from the Mahindra XUV300, the Ford EcoSport will have to contend with the Hyundai Venue, the Tata Nexon, the Maruti Suzuki Vitara Brezza, and the upcoming Nissan and Renault compact SUVs.