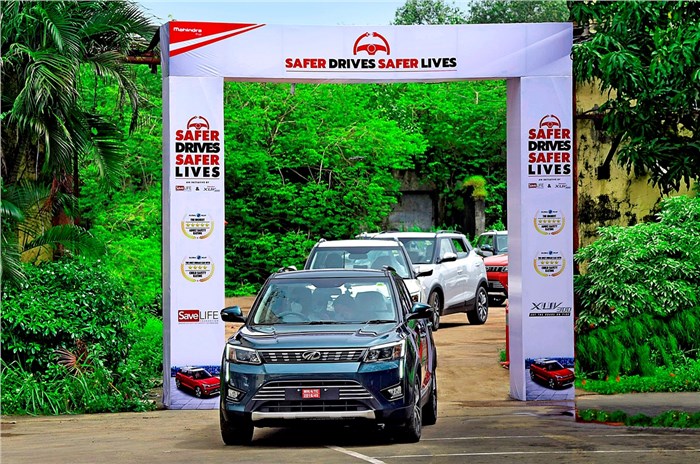 Mahindra, in an effort to further the cause of road safety, recently kicked off its ‘Safer Drives Safer Lives’ campaign, in association with the SaveLIFE Foundation, an independent, non-governmental organisation. The home-grown automaker organised special drives in the cities of Delhi, Mumbai and Chennai to highlight the best driving practices, as well as the importance of modern safety equipment in cars.

Road safety lapses have, for long, been a serious cause for concern in India, with the country registering the highest number of road fatalities in the world. Though the buzz around safer roads has picked up in recent times with new vehicle safety norms being implemented in the past few months, the situation still remains far from ideal.

The event kicked off with briefings from auto experts on the typical Indian driving conditions, road user behaviour, the need for following regulations and tips for staying safe from behind the wheel. Providing further insight at the Delhi leg of the event was ace rally driver and Arjuna Award winner, Gaurav Gill.

Participants were then taken out for a drive on public roads to demonstrate how to effectively tackle day-to-day driving situations. The focus was on safely negotiating slow-moving traffic, following speed limits and road signs, giving way to pedestrians and, overall, just being aware of other road users.

The role of modern safety tech

Safety equipment in modern cars can enable the driver to maintain control of their vehicle even in adverse conditions and help avoid accidents. To drive the point home, each of the participants was taken through a series of demonstrations to simulate these adverse conditions in a Mahindra XUV300, which boasts of the highest safety rating awarded to an Indian car tested by the global safety watchdog Global NCAP (New Car Assessment Program).

First up was a braking test, which showcased the increase in braking distance with speed, highlighting the importance of maintaining a safe distance from other vehicles at higher speeds.

Next up, driving instructors showed how ABS (anti-lock braking system) can prevent a vehicle’s wheels from locking up under hard braking, allowing the driver to avoid and manoeuvre around obstacles.

This was followed by the participants being taken around a slalom course to demonstrate the ability of the vehicle’s ESP (electronic stability programme) system in preventing the car from skidding by modulating engine power and braking individual wheels.

And with the tests being performed on different surfaces in different cities, ranging from wet tarmac in Mumbai to loose dirt in Delhi, the day’s activities also highlighted the effectiveness of safety systems in different conditions.

Speaking about the safety campaign, Veejay Nakra, CEO, Automotive Division, Mahindra & Mahindra said, “Mahindra has a long-standing reputation for building vehicles that are reliable, trustworthy and safe. We have constantly raised the bar for safety, going beyond regulatory requirements, voluntarily.”

“Our XUV300, which is India’s safest vehicle among all the vehicles tested by GNCAP in India over the last six years, is a testimony to that. However, the status of road safety in India is alarming, hence we have decided to take on the mantle and bring road safety into the fore through this ‘Safer Drives Safer Lives’ campaign.”

With a road accident fatality being reported in the country every four minutes on an average, it is imperative for road users to adopt driving discipline and for buyers to assign a greater importance to a vehicle’s safety aspects while making purchase decisions. Raising awareness, then, is a key step towards achieving the goal of safer Indian roads.