Jeep's smallest SUV being readied for global debut; to sit below the Renegade

New SUV from Jeep will come in full-electric and petrol mild-hybrid versions; to sit on Stellantis' eCMP platform.

Jeep has begun testing its smallest SUV yet, internally named as Project 516. This new SUV will sit below the Renegade in Jeep's global line-up and was previewed as a concept a few months ago. The pre-production prototype seen here resembles the concept quite closely.

The single spy photo that has surfaced on the internet confirms that the overall shape of the bodyshell, the front bumper design, glasshouse and the wheel arches look quite similar to the concept.

The production-spec SUV is expected to include styling elements like a split-headlight design, generous plastic cladding on the bumpers, a closed grille, chunky wheel arches, and C-pillar-mounted rear door handle. No interior photos are available, but this picture suggests that it will have a floating infotainment screen like the new Meridian.

Jeep has also confirmed that this new SUV will be the brand's first BEV SUV, which means it will have a full-electric powertrain. The model will sit on the second-gen Stellantis eCMP modular platform and will also have MHEV versions, which will get petrol mild-hybrid powertrain options. Jeep's new small SUV will, in fact, have electronic all-wheel-drive (eAWD) as an option, while front-wheel-drive (FWD) will remain standard on full-EV and mild-hybrid powertrain versions. This new SUV could be called the "Jeep Jeepster" at its debut and will intitially be built in Poland for global markets.

Jeep recently introduced the three-row Meridian in India. The brand sells the Wrangler and Compass here and will also launch the new-generation Grand Cherokee, with the model being assembled in India this time. Jeep says India would be the first market outside North America to have the SUV locally assembled. 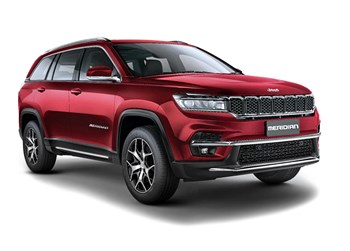