The sub-Renegade Jeep SUV will come in mild-hybrid ICE powertrain and full-EV versions. 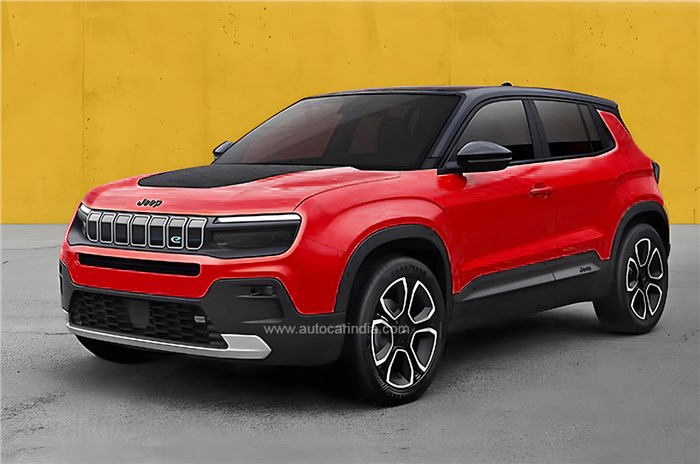 The upcoming Jeep small SUV could see a global debut sometime this year. This all-new model was previewed in full-EV concept form a few months ago. Likely to be called the Jeep Jeepster, this sub-Renegade SUV will go on sale overseas sometime next year.

Jeep's smallest SUV to get eAWD

With its smallest contender in the SUV space, Jeep will further ramp up the electrification of its global line-up. This new model, as we reported earlier, will get a mild-hybrid petrol powertrain and will also be offered as a pure EV; the latter was shown earlier this year in concept form, as part of a wide-reaching electrification strategy presentation given by Stellantis boss Carlos Tavares.

Jeep’s new small SUV will come with front-wheel-drive (FWD) as standard – on both, the full-EV and mild-hybrid powertrain versions – while higher variants will get optional electronic all-wheel-drive (eAWD). In an eAWD system, an electric motor powers the rear axle, and this allows Jeep to offer an affordable four-wheel-drive (4WD) solution on two-wheel-drive (2WD) platforms. Compared to a regular all-wheel-drive (AWD), there is no physical connection between the fore and aft driven wheels in an eAWD.

The new Jeep will sit on one of Stellantis’ family of new STLA platforms, likely the smallest version, and could be closely related to models from sibling brands, like the Peugeot e-2008 and Citroën e-C4.

Visually, the new ‘baby’ Jeep seems to share similarities with the soon-to-launch Jeep Grand Cherokee PHEV, with slim headlights and 4x4-style chunky wheel arches. It is also expected to sport the same seven-slat front grille as every other Jeep model – even in electric form.

Expected to be revealed this year and launched overseas in 2023, it will be one of 100 new products to be launched by Jeep parent Stellantis by 2030. Overall, Stellantis will launch 75 new battery-electric models by 2030 and expects to be selling five million units annually by that time.

There is currently no news of the smallest SUV from Jeep coming to India. The carmaker's next launch for the country will be the new Grand Cherokee, which is set to hit the market before the end of the year. Jeep has also confirmed that the new Grand Cherokee will be locally assembled and powered by a 2.0-litre turbo-petrol engine as standard. Additionally, the Jeep Meridian went on sale in India recently and you can read more on that here.