The Renegade PHEV gets a rear-mounted, 136hp electric motor, in addition to its 180hp, turbo-petrol engine, which allows for an electric-only range of 50km. 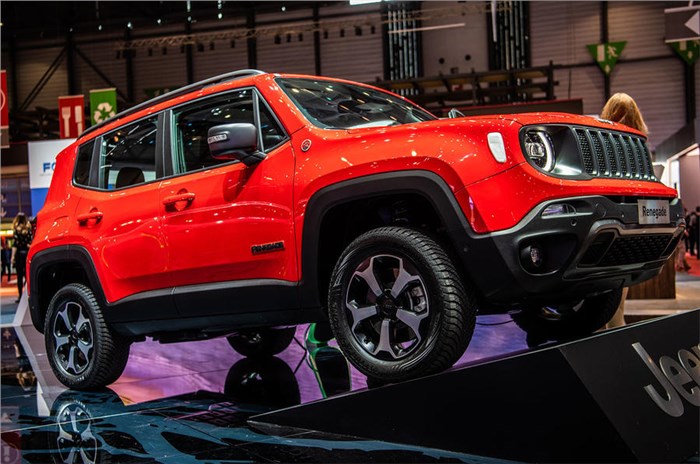 Jeep has revealed details of a powerful petrol plug-in hybrid electric vehicle (PHEV) version of the Renegade SUV, set to go on sale in international markets in June 2020.

The PHEV version of the SUV is substantially based on the current Renegade offered abroad, with the most major change being the addition of a 136hp rear-mounted electric motor, mounted on a modified version of the AWD Renegade’s rear subframe.

The battery – which will be good for an EV range of 50km at up to 130kph in ideal conditions – has been mounted in the floor pan’s centre tunnel and also takes some space under the rear seat. The fuel tank (also under the rear seat) has been squeezed down to a 39-litre capacity.

Under its bonnet, the 180hp, four-cylinder turbo-petrol engine now drives the front wheels via a 6-speed automatic gearbox (in place of the standard 9-speed unit). The engine also gains a belt-activated generator, which recharges the battery when the car is braking or coasting.

The car can run in pure EV mode with electric power sent to its rear wheels, in pure petrol mode with drive to the front wheels, and as a petrol-hybrid with the generator assisting the engine. All-wheel-drive mode, gives a combined output of 240hp, allowing for a 0-100kph time of around 7sec. It will also be possible to put the battery on ‘hold’, to be used when arriving in city centres at the end of a journey. Interestingly, this PHEV only weighs 120kg more than the diesel Renegade; the weight plays an important factor when considering high-speed economy.

The American automaker also promises a significant improvement in off-road ability because the rear electric motor offers a very precisely controlled 259Nm of torque that can be split between each rear wheel. There will also be a ‘Trail-rated’ version of this Renegade that will be able to wade through water that's up to 60cm deep.

Jeep’s Head of Product Marketing Marco Pigozzi says that the intention was to create this plug-in version without compromising on interior room; and that no space has been lost in the rear cabin, while the boot floor did not need to be raised. The main change was the loss of 15 litres in the boot so that some of the electronic control systems could be mounted on the boot wall.

As we had previously reported, Jeep will not bring the current iteration of the Renegade to India. However the brand is considering bringing the next-generation Renegade to our market. Additionally, the American off-road marque will introduce a Compass SUV facelift by mid-2020, a sub-four-metre SUV in late 2020, (to rival the Maruti Suzuki Vitara Brezza, Hyundai Venue, etc.) and also bring a seven-seat Compass-based SUV later on, by 2021.