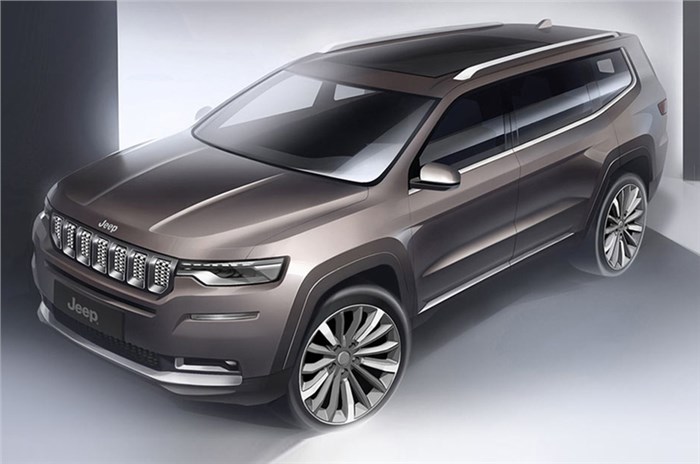 After a quiet period, Jeep India recently began rolling out newer derivatives of the Compass. It started with the addition of the rugged Trailhawk, then adding the Compass diesel-automatic in standard-spec, and then the introduction of BS6-compliant versions of the SUV. At the moment, the Compass is Jeep's only model being built at the carmaker’s Ranjangaon facility near Pune. The Compass produced here is meant for the Indian market as well as for export to other right-hand drive markets. The company is now gearing up to introduce more made-in-India products in near the future.

First up, Jeep will bring a larger seven-seat SUV based on the Compass’ platform. This new SUV, now called the Jeep D-SUV (though also known by its former codename Low-D) will be introduced in the Indian market sometime next year, as reported by us long ago. The monocoque-bodied 7-seat SUV will share a lot of components with the Compass. One can expect similar body panels, engine and gearbox options, and even interior bits like the dashboard and seats, to be common.  Jeep will, however, try to add premium bits with better quality materials on the inside to justify its higher price point. We've been told that this new SUV will be as capable off-road as the Compass and there will be no compromise in its “Jeep DNA”.  While the model would be pitched against SUVs like the Honda CR-V and the Skoda Kodiaq, it could also pull some buyers away from ladder-frame models like the Toyota Fortuner and Ford Endeavour.

Apart from the seven-seat SUV, the Compass is also in line to receive a major facelift inside-out. Having already received BS6-compliant engines, the model will now see updates to its styling and interior. The updated model has already begun road tests abroad and we can confirm that the facelift will not just include new-look plastic bits. The refreshed Compass will get sheet metal changes, along with major tweaks to its interior – we are told that the model will get an all-new dashboard design too. Parent company FCA's latest Uconnect infotainment system – that was unveiled at last year's Consumer Electronic Show and comes replete with a large 12.3-inch screen – could also make it to the refreshed Jeep Compass for India. We expect the updated Compass make its India debut by the end of this year, or early next year, followed by a market launch soon after.

The third and most mass-market offering from Jeep, especially for market like ours, will be its sub-four-metre compact SUV. Internally known as Jeep 526, this new SUV is yet to see the light of day. This new compact SUV will first be seen wearing a Fiat badge for the South American market – this model has already begun its initial phase of road tests. The Jeep derivative of this new compact SUV, as reported by us long ago, will feature similar 4WD system as the Fiat Panda. It will have a more upright stance and will be a “true Jeep”, according to sources. The launch of the production-spec Jeep 526 SUV is still some time away and is only likely to happen at a later stage – the global unveil is expected in the latter half of 2021.

IMAGE USED FOR REPRESENTATION ONLY