More off-road-capable version of Jeep’s Compass will launch by July and debut the much awaited diesel-automatic combination. 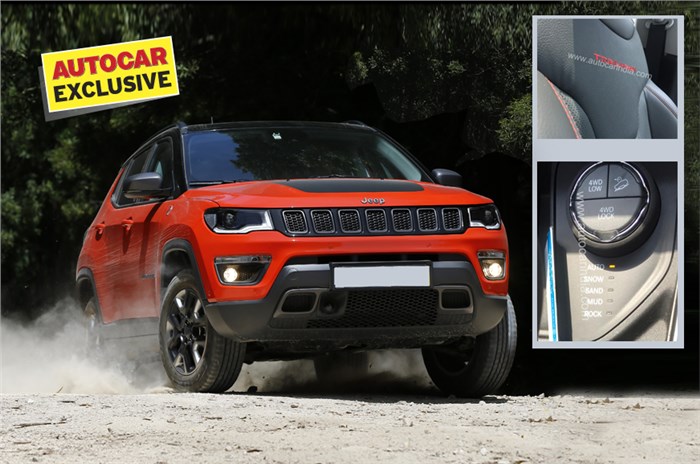 Bookings for the long-awaited India-spec Jeep Compass Trailhawk will begin in mid-June, before the SUV officially launches in India by July 2019. Despite a number of delays in its launch, the more off-road-focused Compass variant will finally add a high-in-demand engine-gearbox combination – a BS-VI-compliant 2.0-litre diesel engine with a 9-speed automatic gearbox.

For those who haven’t been keeping track, the Trailhawk badge means that Jeep has equipped the Compass with its Active Drive Low 4x4 System – a four-wheel-drive system with a low range, a rear-locking differential, hill-descent control and an additional Rock mode for the Selec-Terrain system (which brings the total to five modes, including Snow, Sport, Sand/Mud and Auto).

Besides the tech, the Compass Trailhawk’s ground clearance of 225mm is a good 20mm more than the standard Compass’. The SUV also looks slightly different, thanks to reprofiled front and rear bumpers that provide improved approach and departure angles, a higher-set air intake to improve water-wading abilities to 480mm (a 75mm increase over the standard Compass), underside skid plates, all-season tyres and all-weather floor mats. Jeep has also added tow hooks painted in red, a black anti-glare decal on the bonnet and the justified ‘Trail-Rated’ badge.

As mentioned before, the new off-road variant of the Compass will get a BS-VI-compliant 2.0-litre diesel engine (it makes 170hp and 350Nm in the Euro-spec Compass) that comes paired to a new 9-speed torque convertor automatic gearbox.

As part of the Trailhawk package, the model will get subtle interior tweaks as well, with special Trailhawk branding on the seats and around the cabin.

While the complete equipment list for the India-spec Compass Trailhawk has not yet been revealed, we expect it will get the same kit seen on the current top-spec Limited Plus variant, which includes a contrast roof, dual-tone alloy wheels, a panoramic sunroof and an 8.4-inch touchscreen infotainment system.

Considering all the changes, expect the Jeep Compass Trailhawk’s price to be around the Rs 27 lakh mark. As we found out when we drove it last year, the Compass Trailhawk is a proper off-roader that will make it unique in its segment. It remains to be seen how it will impact the Compass’ sales figures, which have been slowing down from 15,245 units in the April 2017 to January 2018 period, to 13,334 units during the same period ending in January 2019.