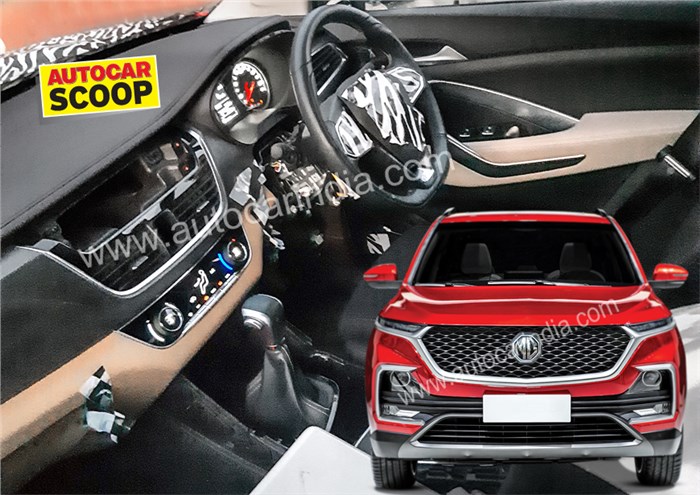 MG Motor’s first SUV for India will get an upmarket cabin and is expected to a long feature list including a sunroof.

We’ve got our hands on the first spy shots of the cabin of MG Motor India’s first SUV. At first glance, it feels like parent company SAIC has just mirrored the left-hand-drive layout but a closer look reveals that there are quite a few differences.The car for India gets a simpler but more upmarket-looking setup, slightly similar to the Baojun560 sold abroad, which will appeal to buyers of all ages.

MG Motor's SUV for India gets a three-layered dashboard with the top part covered in soft-touch material and contrast stitching. The middle section has a dark grey gloss finish, houses the AC vents with chrome inserts, and has a provision for a free-standing infotainment touchscreen (not seen on this test mule). The instrument cluster is a simple unit with a large TFT display that's flanked by two large dials – the speedo and the tachometer.The AC vents are positioned at the centre, separated by a space that'll feature an analogue clock (again, not seen on the test mule). Below this, is the panel for the climate control system; the chunky round switches that adjust temperature have individual displays, and are placed in the middle.

The three-spokesteering wheel gets multiple buttons for audio and telephony controls, along with cruise control settings. The model being tested was equipped with push-button start, a panoramic sunroof, electrically adjustable driver and passenger seats, an electric parking brake, an auto-hold function, a reverse camera, and front and rear parking sensors. Though not seen in the images, a sunroof and rear AC vents are expected to be part of SUV's features list.

According to our sources, the test mule was powered by a 1.5-litre turbo-petrol engine mated to a CVT gearbox. For India, MG is likely to offer Fiat's 2.0-litre Multijet diesel engine though. The model sold abroad comes with a rotary knob for selecting gears however, the model seen in India had a conventional gear knob with a provision for manual shifting as well.

The MG SUV for India will measure around 4,655mm in length, 1,835mm in width and 1,760mm in height, which makes it slightly bigger than the Jeep Compass. In spite of its large dimensions and long equipment list, MG Motor India is confident it can price its first SUV just underRs 20 lakh, thanks to heavy localisation. The SUV will be produced at SAIC’s plant (formerly owned by General Motors) in Halol, Gujarat.