The GWM Tank 600 gets a traditional body-on-frame construction and turbocharged V6 engine under the hood. 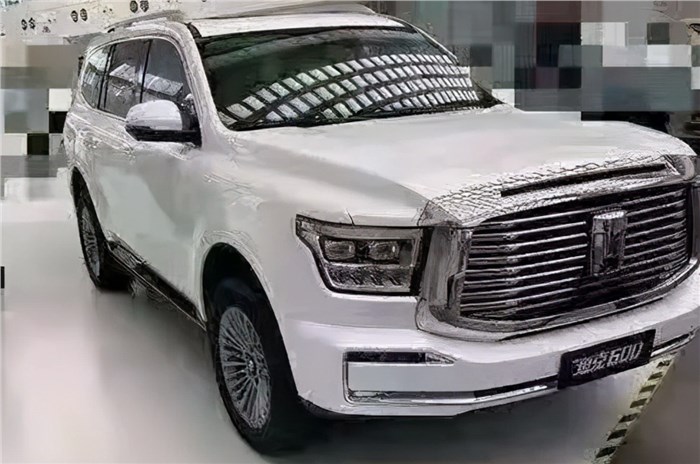 Chinese carmaker Great Wall Motors constituted a new sub-brand earlier this year called Tank. GWM’s Tank sub-brand debuted at the 2021 Shanghai Auto Show in April and showcased three concept models – the Tank 300 Cybertank, Tank 700 and the Tank 800. Sometime ago, the company also released a set of design sketches previewing their upcoming, fourth model called the Tank 600. Now, a leaked photo gives us a complete look at the production-ready design of the Tank 600.

The Tank 600 is a traditional body-on-frame SUV and as per leaked documents, it measures 5,050mm in length, 1,934mm in width, 1,905mm in height and has a wheelbase of 2,850mm. This makes it only slightly larger than the Toyota Land Cruiser Prado, which is also deemed to be its main rival.

In terms of positioning, the Tank 600 will sit above the smaller Tank 300 and below the Tank 700 (a Toyota Land Cruiser 300 Series rival) and the flagship Tank 800 model. Interestingly, the Tank 600 is similarly sized as the Haval H9, also built by Great Wall Motors, but the former will be positioned as a more premium, spacious and luxurious offering.

The officially previewed design sketches and the leaked photo give us a fantastic look at the styling of the upcoming SUV. While the design sketches previewed the butch proportions and upright stance of the Tank 600, the leaked image reveals that the face will be heavily garnished with chrome. The huge, single-piece grille features horizontal chrome slats, plus a thick chrome surround. There’s more chrome on the bumper as well. The flat nose and tail section are well complimented, with squarish LED headlamps and tail-lamps.

While there’s not much information about the Tank 600 just yet, we do know what’s going to be under its hood. The Tank 600 will be powered by a series of 2.0-litre, 2.4-litre and 3.0-litre engines, with the most powerful 3.0-litre turbocharged V6 engine producing 349hp and 500Nm of torque. This engine is also shared with the larger Tank 700. The engines will come paired with a 9-speed torque converter automatic gearbox, sending power to all four wheels.

As already mentioned, the Tank 600 will be officially unveiled at the Chengdu Motor Show that’s scheduled to take place from August 27 to September 5. It is then expected to go on sale in the domestic market in China in the fourth quarter of 2021, with an annual production goal of 60,000 units. While the Tank 600 could make it to other markets such as Australia, it’s unlikely to come to India at point of time.

Great Wall Motors’ India launch plans came to halt about a year ago, with worsening Indo-China relations due to a standoff in the Ladakh region. The carmaker had showcased a slew of SUVs and EVs with much fanfare at the 2020 Auto Expo. Prior to the Auto Expo, Great Wall had even entered into an agreement with General Motors to acquire their plant in Talegaon, Maharashtra.

Following the border disputes, the Maharashtra government decided to freeze all investments from China, thus putting a hold on GWM’s operations in India. While the Talegaon plant still awaits necessary clearance from the government, the company has resumed its brand communication activities in India. GWM has set up an office in Gurugram and has even launched its India website earlier last month. GWM is hopeful of getting necessary approvals soon as it recently went on a recruitment drive to complete building the Great Wall Motors India team.