Expected to go on sale later this year, the five-door Gurkha will come with multiple variants and seating options. 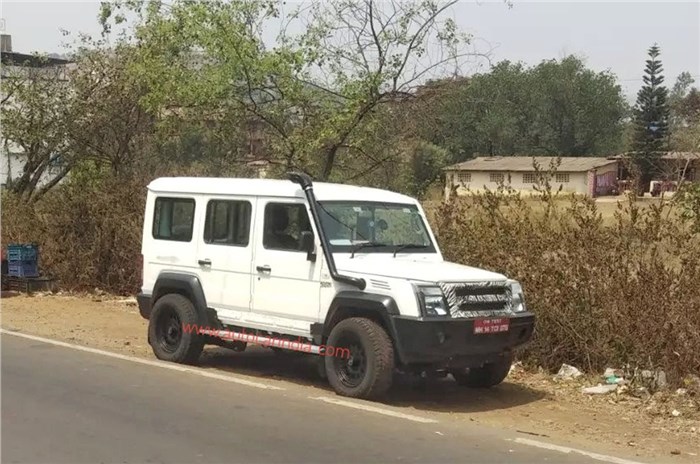 The Force Gurkha five-door has been spotted testing once again, although this new test mule can be seen riding on a more rugged set of wheels and not the standard steel rims. This suggests that the upcoming SUV could come in multiple variants, including a rugged 4x4 option.

Force Gurkha five-door: what does the new image reveal?

Previous test mules of the five-door Gurkha have all been spotted riding on steel wheels with regular road tyres, but this new one can be seen wearing a set of much beefier tyres that even extend out of the wheel arches.

Force Motors could be looking at multiple variants for the five-door Gurkha, possibly separate 4x4 and 4x2 options too. The test mule pictured here might then be the 4x4 variant.

Meanwhile, a 4x2 version will help Force Motors to price the five-door Gurkha more aggressively, thereby driving volumes from customers who are not interested in taking the SUV off-road. A similar approach has been used by the Mahindra Scorpio for years, and it has primarily been the 4x2 variants that brought in the volumes for the Scorpio range.

The five-door Gurkha, as seen in the spy photos, will come with a front end styling that's similar to the larger Trax and may not get the round-headlight look of its three-door sibling.

The five-door Gurkha will, of course, be based on a stretched version of the Gurkha’s C in C platform. It is expected to have a wheelbase of around 2.8m, which means it will be about 400mm longer than the regular Gurkha. It will also have multiple seating configurations, including 6- and 7-seat layouts and captain's chairs in some variants.

Under the hood, the five-door Gurkha is expected to carry forward the same Mercedes-sourced 2.6-litre diesel engine from the regular three-door Gurkha, although the 91hp and 250Nm outputs could be uprated for the heavier and larger five-door SUV. The 5-speed manual gearbox is also expected to be carried forward, as is.

The five-door Force Gurkha will not be alone in its league of hardcore, ladder-frame off-roaders. In a very similar fashion, Mahindra is developing a five-door version of the Thar that’s expected to launch in a couple of years’ time. Similarly, Maruti Suzuki has also been developing a five-door version of the Jimny, specifically for India, and that too is expected to launch sometime next year. The new five-door Gurkha will continue to rival the current-gen Scorpio (2WD only), which is expected to continue selling even after the new one hits the showrooms.

Do you think Force will be able to capitalise on the five-door Gurkha with different 4x4 and 4x2 variants? Let us know in the comments below.