Ferrari unveiled not one, but two convertible supercars at Universo Ferrari – its new exhibition in its hometown of Maranello. 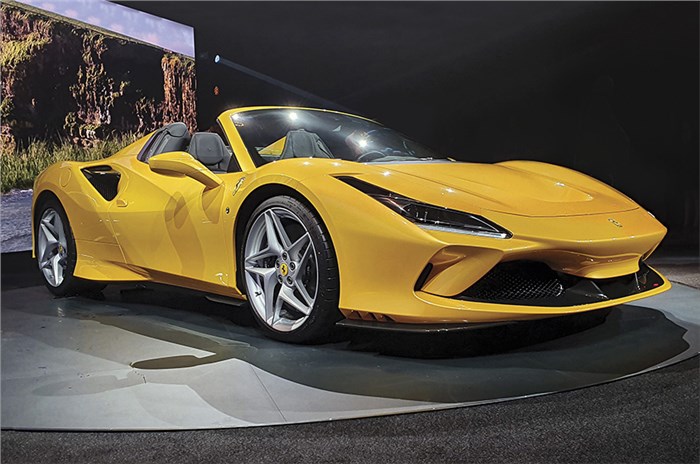 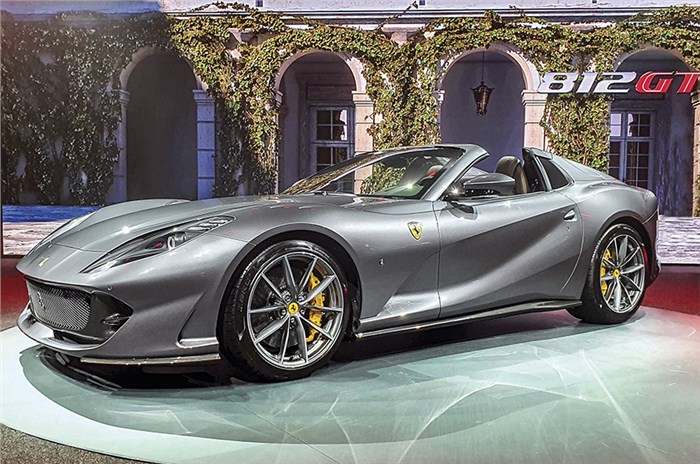 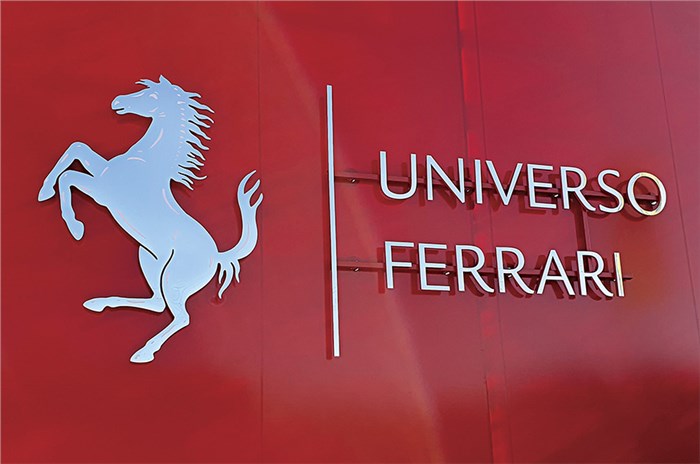 Ferrari is zipping past a number of new milestones today. It’s opening the doors to Universo Ferrari – an exhibition to celebrate and showcase the company’s heritage, its current model range, and of course, its motorsport prowess (more on this later). It’s celebrating 90 years of Scuderia Ferrari and its participation in motorsport. It’s achieved a new high for R&D spending (750 million Euro). It’s also, unveiling two new models simultaneously for the first time ever. Say hello to the F8 Spider and the 812 GTS.

F8 OF THE FURIOUS

The F8 Spider is the inevitable drop-top version of the F8 Tributo and doesn’t stray too far from the formula set by its predecessors. It’s a two-seat supercar with a V8 mounted in the middle, and rear-wheel drive; but it’s a number of tiny tech changes that – apart from the dramatic look – set it apart from the 488 Spider. It’s inherited most of these from its hard-top sibling, the F8 Tributo, including the engine that is the reason behind the ‘Tributo’ name. You see, Ferrari’s F154 twin-turbo V8 has won the prestigious International Engine of the Year award for four years on the trot, and has even been adjudged the best engine of the last 20 years! That’s a tremendous accolade, and you can bet they’re going to celebrate it. 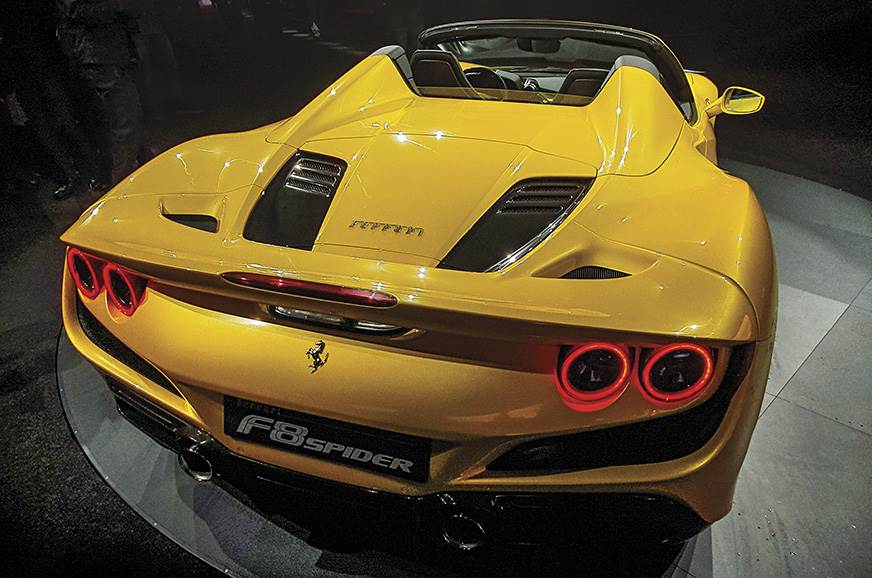 Both cars’ roofs fold in 14sec at speeds upto 45kph.

The engine has evolved from its first appearance in the Ferrari California T in 2014 and, in its latest guise, produces 720hp and 770Nm of torque from 3,902cc and, Ferrari says, “zero turbo lag”. It also gets a gasoline particulate filter (GPF) for the first time, to meet stricter emissions requirements. And while that’s sapped some performance and some of that highly emotional Ferrari V8 noise, they say efforts have been made to compensate for that. The inconel exhaust borrowed from the 488 Challenge race car not only saves 9.7kg, but also adds some fruitiness to the sound. In fact, the powertrain is a total 18kg lighter thanks to that exhaust and other weight-saving measures from the 488 Pista Spider, like the titanium con rods, crankshaft and flywheel. And finally, to help you get the most out of that engine note in the cabin, Ferrari has developed what it calls a ‘hot tube’, which mechanically links the engine bay to the passenger cell – so the sound you hear is mechanical, not artificially synthesised.

As for the ‘Spider’ part of the equation, it’s – as with the 488 Spider it replaces – a one-piece, flip-folding hard-top that stows away behind the seats in just 14sec, at speeds of up to 45kph. Ferrari says this is the best solution to keep weight and mechanical complexity to a minimum, while retaining rigidity when the roof is in place. It still requires additional chassis-stiffening compared to the coupé, which adds about 70kg to the weight, but it will still hit 100kph in just 2.9sec. The F8 Tributo coupé will be coming to India in early 2020, so you can expect the F8 Spider to follow soon after, at a price close to Rs 4.3 crore (ex-showroom).

RETURN OF THE V12 GT CONVERTIBLE

Track-focused mid-engine supercars with unrivalled handling capability might be what you know Ferrari for today, but the truth is, the Grand Tourer or GT is where Ferrari’s road car journey really began. What makes a GT, typically, is an engine at the front (usually a V12 in Ferrari’s case), a luxurious interior in the middle, some luggage space behind and an ability to get from one end of Europe to another briskly, yet comfortably. And, more often than not, Grand Tourers come in both coupé and convertible forms – because who wouldn’t want to crush continents with the wind in their hair? 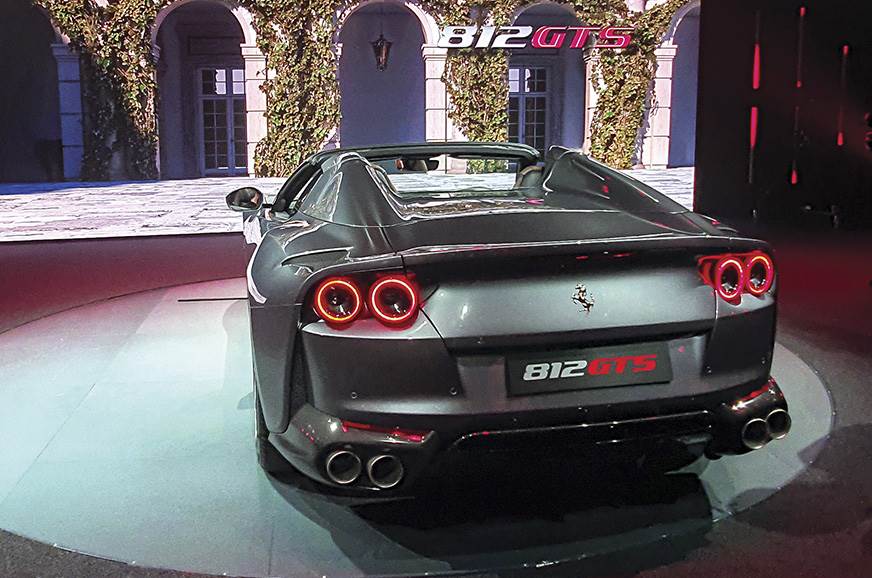 Scoops in the buttresses channel air away from the cabin.

Would you have guessed then that it’s been 50 whole years since the last V12-powered front-engine Ferrari convertible was in series production? It was the 356 GTS, more popularly known as the Ferrari Daytona. You might be wondering about the 550 Barchetta, the 575 Superamerica, the 599-based SA Aperta and the F12-based F60 America – all front-engine V12 Ferrari convertibles. Turns out, they were all limited-run models and never officially part of the regular model range.

That’s going to change very soon thanks to the 812 GTS – yes, the name is a tribute to the model designation of the Daytona – which will be in series production for “one unit less than what the market demands,” as Ferrari loves to claim. 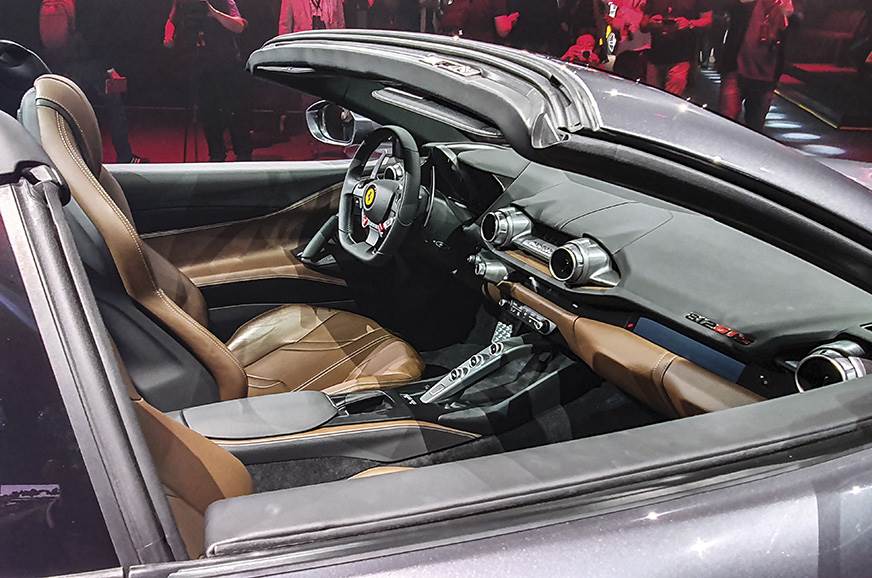 Cabin unchanged from 812 coupé, apart from lack of space behind seats.

It is based, as the name suggests, on the company’s current V12 hyper-GT coupé, the aptly named 812 Superfast. It inherits its powertrain – a 6.5-litre, naturally aspirated V12 that makes 800hp at a screaming 8,500rpm, aswell as 718Nm of torque. This will likely be one of the last pure, unassisted,
high-capacity, natural-aspiration performance engines of the modern age; and now you get to hear it with the roof open! Want to know what goes into making that sound? Here’s an excerpt from the official press material:

“All the pipes in the 6-in-1 exhaust manifold to the monolithic catalytic converter are of equal-length and this optimises the sound by giving predominance to the first-order combustion harmonics.” 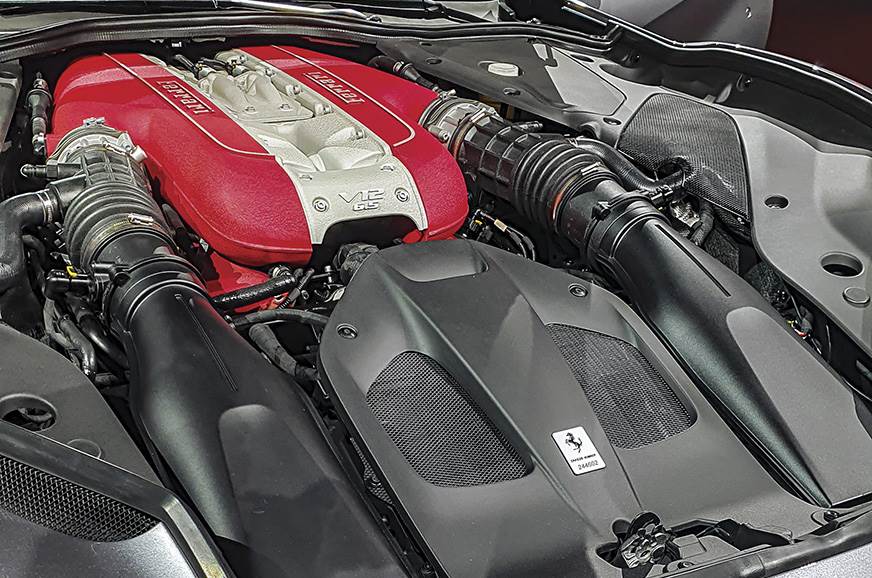 Despite all that performance (0-100kph in under 3sec, a top speed north of 340kph), Ferrari claims this is still meant to be a grand tourer at the end of the day. Sure, we’ve seen its coupé sibling carve up a race track as aggressively as the best of them, but perhaps with the roof opened up, all that power is better deployed to a winding road on the French Riviera. The roof, like the F8 Spider’s, is a single-piece, flip-rotating hardtop that disappears beneath a pair of buttresses on the rear deck in just 14sec, at speeds of up to 45kph. The biggest compromise, compared to the coupé, is space to store your things. The roof mechanism means you lose all the space behind the seats (engineers say a lot of work went into fitting the seats comfortably), and the boot has been reduced to just 210 litres; still good enough for a pair of weekend bags. 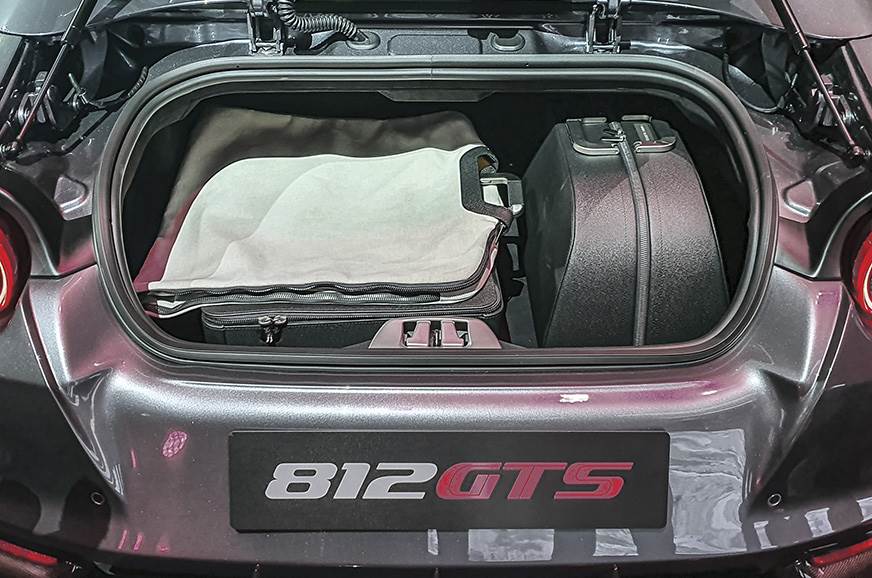 The reason Ferrari’s brought the V12 GT spider back into series production is the same reason that it’s finally confirmed it’s working on its first SUV – or whatever form an all-terrain Ferrari would take. While the carmaker maintains that exclusivity is a key part of the brand and production numbers aren’t something it is chasing, it does want to have products for every kind of customer. However, some things are still very much off the table for the moment, like an all-electric hypercar in the vein of the Pininfarina Battista or Lotus Evija. “Sound is an important part of emotion, and people come to Fiorano looking for emotion, so it’s a no for now,” said Enrico Galliera, chief marketing and commercial officer, Ferrari. The company also maintains that while all-electric cars may have straightline performance, their weight and ‘on-off’ power delivery means they cannot deliver the same driving pleasure expected of a car with the prancing horse on its nose. A new pillar in Ferrari’s strategy is ‘to surprise,’ and they assure us there are a few milestones left to hit before the year is up. 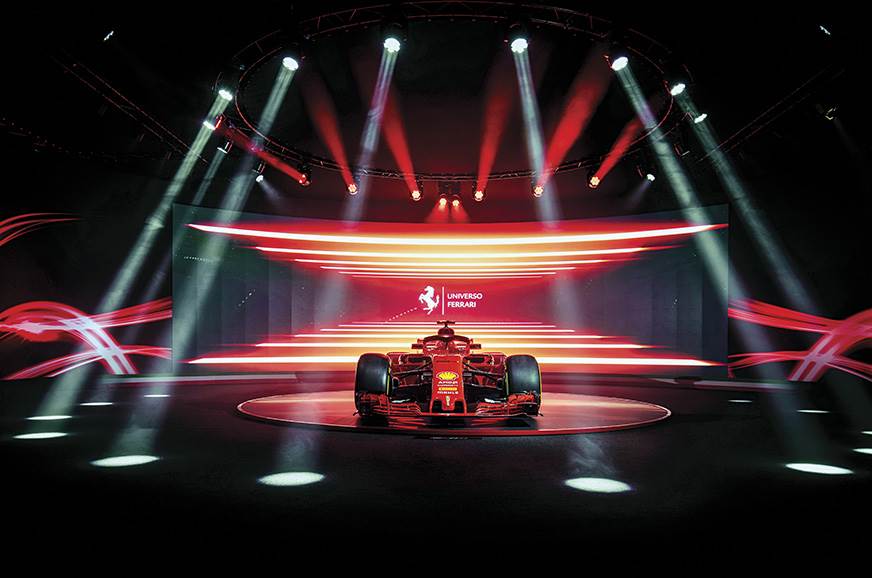 The Scuderia’s 90th anniversary celebration section is an audio-visual delight.

You’ve heard of Ferrari World; now it’s time for Ferrari Universe. The former is, of course, the massive Ferrari-themed amusement park in Abu Dhabi which, Tifosi or not, is a must visit for anyone who likes going fast. The latter, which you see in these images, however, is Universo Ferrari, which aims to open up a slice of the brand’s home in Maranello to the public for the very first time, including the Fiorano circuit, where every new Ferrari is tested. Ordinarily, only customers or the media get access to this hallowed ground, but for a select few days this year, this exhibition will be open to the public – via booked tours, of course. 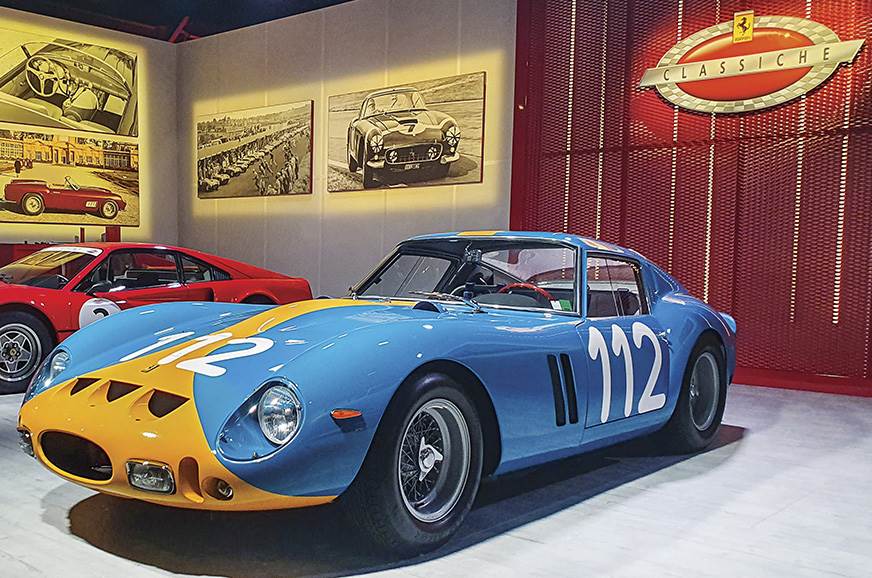 Ferrari Classiche is all about in-house restorations, like this exquisite 250 GTO.

The exhibition starts, of course, with motorsport and the Scuderia’s current powerhouse, the SF90 on display alongside an enthralling history lesson on the race team. Then comes Ferrari Classiche, the brand’s in-house restoration programme, where you’ll catch a glimpse of an absolutely exquisite 1962 250 GTO. Then comes Corse Clienti, where well-heeled customers can sign up for training programmes – not just in Ferrari’s GT race cars, but also open-wheel training in none other than Schumacher’s 1997 F1 car! And finally, the entire current model range sits spread around a huge enclosure, along with the two engines that power it – and indeed the two convertibles you just read about. 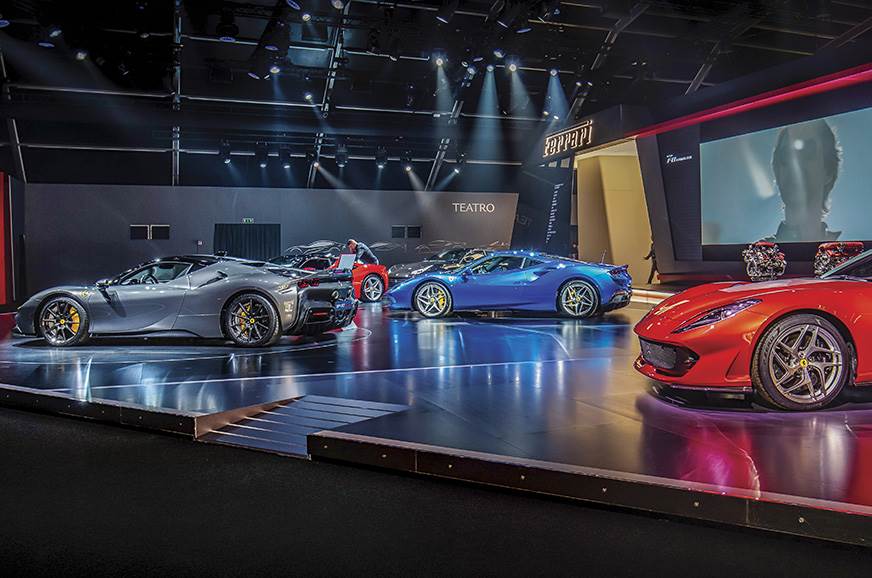 The whole range of road cars on display, including the insane 1,000hp SF90 (left).

The highlight? The SF90 Stradale supercar, which is wildly advanced, even by Ferrari’s own standards. Named after the F1 car and 90 years of the racing team, this is the company’s new flagship. A 1,000hp, mid-engine V8 hybrid that’s already starting to make the rest of the range look obsolete. By the time you read this, the days allocated for the public to visit Universo Ferrari will already have passed. But maybe – just maybe – they’ll open the doors up for another round.