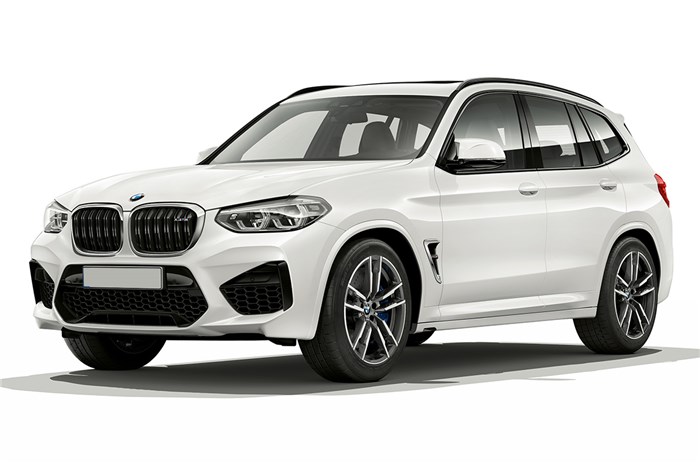 The BMW X3 M has been launched at a price of Rs 99.9 lakh (ex-showroom, India). This is the first time that the X3 has received a high performance version from BMW’s M division.

In line with its M credentials, the BMW X3 M features a more aggressive exterior design than the standard X3. It shares its design language with the other X-vehicles in the BMW range, featuring black kidney grilles with double slats, slightly hexagonal wheel arches, and muscular proportions, along with discreet roof-rails and a rear spoiler. The X3 M sits on 20-inch wheels as standard.

The interior of the X3 M features a similar layout to the standard model, but with a number of M-specific changes. The “M-style cockpit design” comprises electrically adjustable sport seats with memory, leather upholstery, ambient lighting, and an M-specific instrument cluster. The X3 M also gets a panoramic sunroof and split-folding rear seats.

The X3 M gets its power from a newly developed “TwinPower Turbo” 3.0-litre inline-six petrol engine with the latest tech upgrades, and is said to have track-tested cooling and oil supply systems.

With power pegged at 480hp and peak torque at 600Nm, BMW claims a 0-100kph time of 4.2s and a top speed of 250kph. There are four driving modes on offer to optimise performance.

BMW’s X3 M transmits its power to all four wheels via an 8-speed M Steptronic transmission, coupled with an M xDrive all-wheel-drive system that is rear-biased and features an active rear differential.

The BMW X3 M will rival the soon-to-be-launched Mercedes-AMG GLC 43.