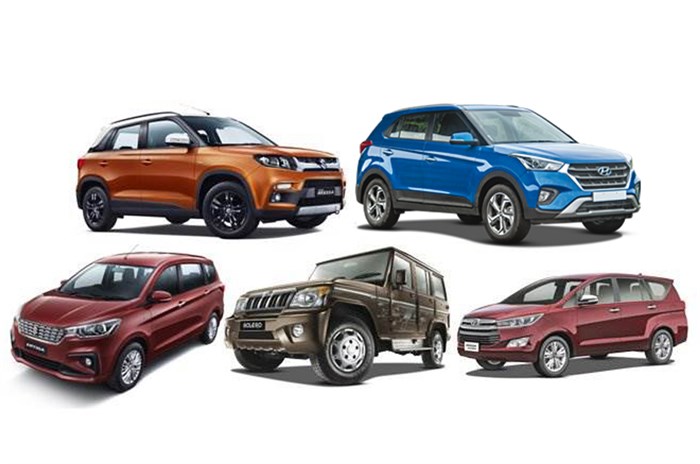 Utility vehicles, which have been the movers and shakers in the passenger vehicle industry for quite some time, have lately been seeing a rough patch filled with sales speed breakers, in the form of rising fuel prices, uncertainty in the longevity of diesel fuel, and high acquisition costs.

Selling a UV, over its hatchback or sedan sibling, rings the profit bells for most car companies, but tough times seem to be coming up for manufacturers. The UV segment, which was accelerating at over 20 percent by end-FY2018, came down crashing this March to a meagre 2 percent, with people becoming conscious of the drinking habits of these heavier machines in times of rising petrol and diesel prices in the country.

Quite surprisingly, while the demand for UVs should have picked up during the elections and their campaigning phase over the last two months, demand for big UVs, essentially the Toyota Innova and the Mahindra Bolero has shrunk significantly, with only the Maruti Vitara Brezza, Hyundai Creta and the Maruti Ertiga – all popular urban movers – sustaining their sales even amidst a limping market. In a nutshell, where demand for the true-blue off-roaders was weak, it was compensated by the soft-roaders and the crossovers to take the total volumes garnered by the Top 5 UVs in April to 41,290 units, remaining flat to 41,479 units sold in April 2018. Here’s a closer look at the top performers last month.

At the No. 1 spot is the Maruti Vitara Brezza, which went home to 11,785 buyers and maintained its lead in the UV segment with a 9 percent growth. The compact crossover had sold 10,818 units in the corresponding month last year. The diesel-only Vitara is under Maruti’s top focus to get a petrol transplant as the carmaker switches off the dirtier fuel entirely from April 2020 in the wake of BS6 emission norms.

The value-packed Maruti Ertiga rightly secured the No. 3 position and jumped two positions to garner cumulative sales of 8,087 units and registering growth of a staggering 42 percent (April 2018: 5,689).

The much-loved people-mover across fleet and private buyers, the Toyota Innova Crysta, took a strong beating, with the MPV recording 20 percent de-growth in its performance. Surprisingly, election campaigns didn’t bring a boost to the Innova’s sales, which were pegged at 5,621 units (April 2018: 7,055) last month.

The Mahindra Bolero closed the tally at the No. 5 position, but dropping two positions from last year. The robust UV sold 5,310 units and also slumped 37 percent (April 2018: 8,527) like the Toyota, a dismal performance considering both have strong word of mouth going for themselves. With safety norms becoming stricter, Mahindra is said to be working on an updated version, loaded with a driver’s airbag, seat-belt alert reminder and parking sensors on the Bolero.

Even as the demand might have slowed down, companies are not giving up on the UV format this easy. While the Hyundai Venue has already been launched, MG Motor India is set to introduce the Hector SUV in June, followed by Kia Motor India’s SP2i Concept. Will the UV space revive once more? We will keep a close watch.