Audi A8 L facelift to launch on July 12; bookings open

The new A8 L features cosmetic updates inside out; to be powered by a sole 340hp TFSI petrol engine. 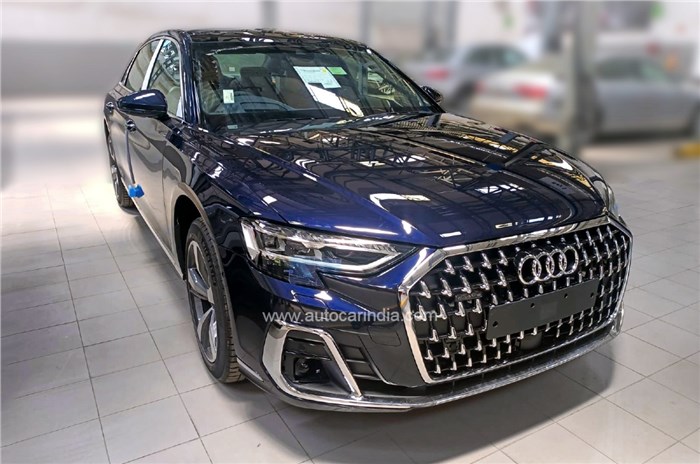 Audi has announced that it will launch the 2022 Audi A8 L in India on July 12 and has also opened bookings for it at a token amount of Rs 10 lakh at its outlets, and on its website. Dealer sources have stated that the flagship luxury limousine will likely have an expected price tag of Rs 1.5 crore (ex-showroom, India).

First teased in April 2022, the new A8 L gets a reprofiled front end, with a bolder use of the mesh pattern across the grille. Another key change is the implementation of angled air intakes that sit beside the fog lamp housings, which are now outlined by a redesigned chrome strip. The luxury limo will also get Audi's new Digital Matrix LED headlights, which host approximately 1.3 million micro-mirrors to split the light across the driver’s lane, enhancing visibility.

Just like the outgoing version, the new A8 L will be powered by the 340hp, 3.0-litre turbo petrol engine with mild-hybrid tech and won’t be offered with a diesel engine. International models get a plug-in hybrid powered by a 3.0-litre, V6 engine that develops 461hp in total; as well as an S8 Performance version with a 570hp, 4.0-litre V8 petrol engine.

The new A8 L will have minimal changes on the inside and continue to feature the dashboard-mounted 10.1-inch infotainment touchscreen that controls navigation and media, along with the 8.6-inch curved display placed right below that operates climate control and seating functions. Additionally, the India-spec version is likely to get two additional 10.1-inch infotainment screens at the back, along with the updated MIB 3 software as seen on international versions.

The new A8 L’s immediate luxury limo rivals will include the likes of the Mercedes-Benz S-Class, which starts from Rs 1.6 crore; the Lexus LS, which costs Rs 1.91 crore; and the BMW 7-Series priced at Rs 1.40 crore (all prices, ex-showroom, India). Just like the outgoing model, Audi will introduce the new A8 L in India via the CBU route.