The new Urbansphere concept is the third of Audi's trio of next-generation concept cars, with the others being the Skysphere and Grandsphere. 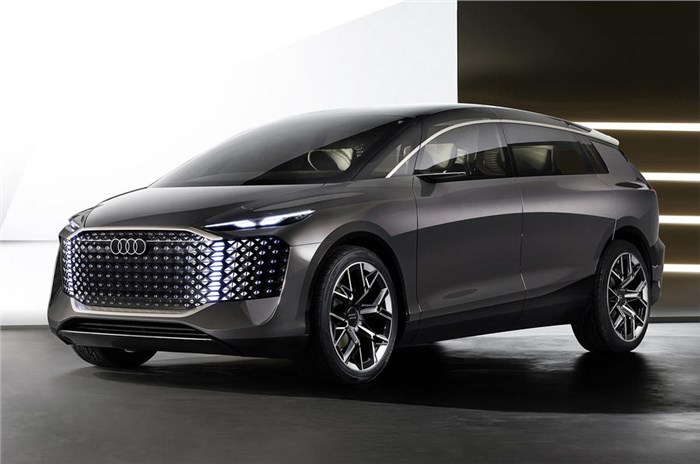 The new Audi Urbansphere concept has been revealed. It is the third of the trio of Audi's next-generation concept cars developed to showcase the future of autonomous vehicle design based on an electric architecture.

Taking the form of a large SUV, the Urbansphere follows the Skysphere, a shape-shifting roadster concept, and the Grandsphere, a sedan described as a "private jet for the road". Like the two prior concept vehicles, the Urbansphere is designed around level-four autonomous driving capabilities.

It’s the German firm’s biggest vehicle to date. Currently, the largest model that Audi sells is the Q7 SUV, which is almost 500mm shorter and has a wheelbase of 2,994mm. An octagonal visor is positioned on the front of the car in place of a traditional grille and constructed of an LED ‘digital light surface,’ which the firm calls the Audi Light Canvas. A similar, rectangular arrangement appears at the rear of the car.

Despite the Urbansphere's size, Audi says it has been designed with megacities in mind, specifically targeting the Chinese market. The design itself was finalised following a ‘co-creation’ approach with the firm’s design studios in Beijing, taking into account the ‘human needs’ of real customers in the city.

The result, Audi says, is a “completely new approach” to car design. “This is a car that was really designed inside out,” Audi said. “We took the requirements that our customers have for the cabin of such a car for the interior. They were the centre stage of our development work.”

The Urbansphere features counter-hinged doors at the front and rear, with no B-pillar. When entering the car, the seats swivel outwards for ease of access, while a "red carpet of light" is projected onto the ground. The firm says the car is able to act as a lounge or as a mobile office, providing a third living space for owners when stuck in traffic.  Many materials used in the model’s construction have come from sustainable sources, Audi says. Wood used around the cabin has been sourced from areas close to its manufacturing site, while the model’s seats are made of recycled polyamide.

In keeping with the self-driving ethos, the Urbansphere’s steering wheel, driver pedals and dashboard can all be hidden when using autonomous functions.

Audi says the Urbansphere’s level four functions include making dinner reservations or online shopping, as well as picking up passengers from their home, finding a parking space and charging the battery.

The Urbansphere features two rows of two seats and each seat is able to rotate to form a communal area for the driver and passengers. Occupants have up to 1,780mm of head room, as well as speakers in each headrest and privacy screens.

All passengers have access to a large, transparent OLED ‘cinema screen’, which pivots vertically from the roof of the car and can be used to watch movies or join video conferences. The Urbansphere also uses stress detection technology, voice analysis and facial scans to calculate a passenger’s feelings and suggest ways to relax.

The Urbansphere is driven by dual electric motors that are positioned on the front and rear axles, producing a total of 400hp.It also uses rear-axle steering and is equipped with 24-inch wheels and adaptive air suspension, which, Audi says, offers “outstanding comfort not only on city highways but even on the uneven, often patched asphalt of downtown streets with no noticeable body movement”.

Power is supplied by the same 120kWh battery used by the Urbansphere, offering up to 749km of range. Audi says it is able to charge at speeds of up to 270kW, which would power it from 5 percent to 80 percent in less than 25 minutes.

Although the Urbansphere is targeted towards the Chinese automotive market and the country’s megacities, Audi says the model is designed to work anywhere in the world.

Sike Guse, Audi’s brand and communication strategy boss, said: “The idea was to have development done in China specifically for Asian metropolitan areas, but we believe this is a concept that could benefit other megacities of this world.

“A European design wouldn’t be much different, really. Our claim is this must be a car that works everywhere in the world. The final elements and fine tuning were done with Chinese customers, and it is geared a bit towards the Chinese market.”