Automakers will have to provide this discount on a new car purchase, if the buyer scraps their old car as part of the government scheme. 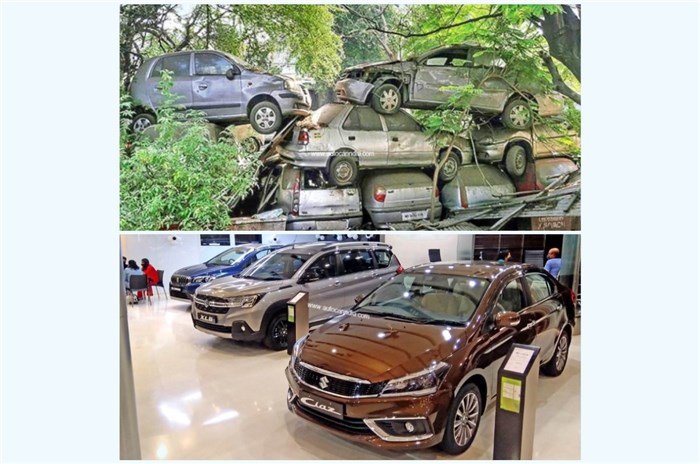 To encourage people to scrap their old vehicles under the new vehicle scrappage policy, Nitin Gadkari, the Union Minister for Road Transport and Highways, has announced buyers will get a 5 percent rebate on their subsequent new car purchase. The rebate amount will be calculated on the cost of the new vehicle and will be provided by the automaker at the time of purchase.

The idea behind the policy is that once a car is 20 years old (15 for commercial vehicles), it is no longer fit to ply on Indian roads because of the greater pollution it generates compared to when it was new, and is considered an ‘End of Life Vehicle’ (ELV). These ELVs are then eligible to be voluntarily sold for scrap, with incentives provided to the owner to do so, with the long-term view of having newer, less-polluting cars on the road and older cars off it. As for the scrappage itself, the Union Government will assist private partners and state governments in setting up the scrapping centres.

To encourage the junking of ELVs, or rather to discourage the continued use of ELVs after their cut-off date, Gadkari also said there would be guidelines for automated fitness and pollution tests these vehicles would have to pass in order for them to ply on Indian roads. He also said that ELVs that fail the tests will attract large penalties and will also be impounded, though the exact nature of the tests and the penalties has yet to be revealed.

Gadkari also talked about how the policy could lead to a 30 percent boost to the Indian automobile industry’s turnover. While no timeline was mentioned, he said it would increase from the present Rs 4.5 lakh crore to Rs 10 lakh crore in the years to come. This would likely be a result of the increased rate of new vehicle purchases that would come from a successful scrappage policy.

He added that once the policy comes to practice, the availability of scrapped material – steel, plastic, rubber, aluminium and more – would increase. If this recycled material is used in the manufacture of automobile parts, it could reduce their costs by 30-40 percent. This could reduce the price tag of a vehicle and benefit the buyer, while potentially creating greater demand.

As we had reported earlier, a ‘Green Tax’ will also be levied on vehicles that continue on the road after 15 years (8 years for transport vehicles) to de-incentivise their use for being a greater contributor to pollution. The government reports that these vehicles are estimated to cause 10-12 times more pollution than new models.

Gadkari said, initially, about one crore polluting vehicles would need to be scrapped. Of this, an estimated 51 lakh would be light motor vehicles (LMVs) older than 20 years and another 34 lakh LMVs that are above 15 years. It would also cover 17 lakh medium and heavy motor vehicles, which are above 15 years of age, and currently without valid fitness certificates, he said.