The fifth-gen Honda City comes soon and will take on an array of revitalised mid-sized rivals. 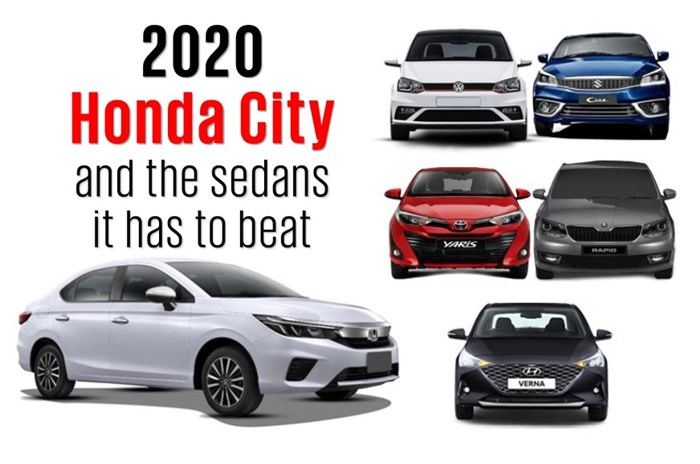 Over four generations and 20-plus years, the Honda City has always been at least at the sharp end of the midsize sedan field, if not the model to beat. And that’s why the arrival of the new, fifth-gen City is somewhat of a big deal. It’s the model that every other midsize sedan will be judged against. Sure, the midsize sedan segment itself might be on the decline, but there’s no shortage of options. In fact, each of the contenders have been revamped in some way over the past year. Over the course of this piece, we’ll give a small summary of each model and what it has to offer.

Honda has not officially revealed the finer details of the new City for our market but we still have enough information to give you an idea of what to expect. While it’s built on the same 2,600mm wheelbase as the outgoing City, the new model is both longer and wider, which also means that it’ll be the largest among midsize sedans in India. The larger dimensions also point to an even roomier cabin. If the rear seat is as comfy as the outgoing model’s, the new City will have enough to pull in chauffeur-driven owners.

The City nameplate is synonymous with exciting petrol engines (well… not the second-gen model) and there’s some good news here too. Yes, the 1.5-litre naturally aspirated engine will be a carry-over from the outgoing model, but its 120hp-plus power means it’s still got the right headline number. Honda City petrol buyers will get to choose from 6-speed manual and CVT gearboxes. In the BS6 era, the City will be one of only two midsize sedans available with a diesel engine. The 100hp, 1.5-litre engine has been updated to meet BS6 norms and, for the first time on the City, will be available with a CVT auto gearbox.

As ever, there will be a wide range of variants on offer but if past records are anything to go by, the top-end models will be really expensive – or could Honda have a price-surprise in store?

The Verna is fresh from a facelift; and you have to hand it to Hyundai for going the distance with this update. A larger grille, redone headlights, new wheels and an updated rear end have done much for the Verna’s look. The interior has also been spruced up with the incorporation of a larger 8.0-inch touchscreen (with connectivity tech) and class-first digital dials. Hands-free boot opening is another addition to the Verna’s kit that also includes features like ventilated front seats. But while the Verna remains among the larger cars in the segment, cabin space is actually down on rivals, which could limit the Hyundai’s appeal to chauffeur-driven buyers.

Completing the Verna’s transformation are its new engines and gearboxes. The new 1.5-litre naturally aspirated petrol engine makes 115hp and 144Nm of torque. It can be had with a 6-speed manual or CVT-auto gearbox; the latter comes with the promise of improved economy. The Verna has long been the bestselling midsize diesel sedan and the 2020 model marches on with a new diesel engine – a 115hp/250Nm, 1.5-litre unit. A 6-speed manual gearbox will be standard, and a torque converter auto is also on offer with this engine. Hyundai also has something for petrolheads, this time around. Hyundai’s 120hp, 1.0-litre turbo-petrol debuts on the Verna, mated to a 7-speed dual-clutch transmission with paddleshifters. Could the Verna take the driver’s car title from the City? We can’t wait to know.

The Maruti Suzuki Ciaz ended calendar year 2019 as the bestselling midsize sedan, just edging past the Honda City and Hyundai Verna. Repeating the feat in 2020 won’t be easy, given the discontinuation of the Ciaz diesel, which brought in a quarter of its sales in the previous period. The smooth 1.5 diesel will sure be missed.

The Ciaz got a facelift and equipment upgrade in 2018 and made the switch to BS6-spec earlier this year. The now petrol-only Ciaz continues with the pleasant but unexciting 105hp, 1.5-litre K15 engine, and is offered with a 5-speed manual and an old-school, 4-speed automatic. Efficiency-enhancing mild-hybrid tech is a point of distinction on the Ciaz.

Power and performance might not be the talking points here, but typical midsize sedan buyers will likely be drawn to the Maruti for other reasons. That list is led by an enticing price tag – the Ciaz is the most affordable of the midsize sedans. That the money gets you among the largest and most spacious of cars (rear-seat legroom is enormous) makes the proposition hard to ignore. In a value-conscious India, the Ciaz is still on a strong wicket.

A midsize sedan with a Toyota badge should have been a recipe for success. The Toyota Yaris though hasn’t captured the midsize sedan-buying public’s imagination. The Yaris is at the pricier end of the spectrum and the lack of a diesel engine hasn’t helped either.

Toyota has jazzed-up the insipid Yaris’ look over the past year with dual-tone paint options and diamond-cut alloy wheels and has also introduced lower-priced ‘Optional’ variants. As a product, the Yaris is competent across most parameters but doesn’t shine in any one. It’s neither the roomiest, nor the best-equipped of models; it’s not even the most exciting car to drive. The 107hp, 1.5-litre engine is nice enough and is best experienced with the CVT-auto transmission.

What the Yaris, like every other Toyota, does guarantee is a fuss-free ownership experience. Factor-in Toyota’s enticing finance schemes and guaranteed buyback plan; in the very least, the Yaris is a car that appeals to the head, if not the heart.

Would you believe it – the VW Vento turns 10, later this year? Yes, the Vento has had a long, long run so far, but it’s not set to drive into the sunset just yet. Quite to the contrary, it’s got a new lease of life courtesy a new 1.0-litre turbo-petrol engine.

The new 110hp, 1.0-litre three-cylinder engine comes in place of the old 1.6-litre petrol and 105hp, 1.2-litre TSI engines, but does not get a dual-clutch automatic like the old TSI did. Rather, the 1.0 is on offer with a 6-speed torque converter auto aside from a 6-speed manual gearbox. How well this new engine-gearbox combo suits the Vento is something we’re itching to find out. It is a pity is that the Vento can no longer be had with a diesel engine, though. The punchy 1.5 TDI unit has been discontinued.

The Vento has aged quite well and 2019’s mild cosmetic update also helped. It’s on the inside that the Vento feels past its prime; and space is down on some of its newer rivals too. But, as ever, the Vento distinguishes itself with its build quality. That decidedly European feel is perhaps the Vento’s biggest pull, even today.

The Vento’s cousin from Skoda has also had a long innings in India. But you have to hand it to Skoda’s marketers for keeping interest alive in the midsize sedan. Just for reference, the Skoda Rapid outsold the VW Vento almost 2:1 in 2019.

For 2020 and beyond, out go the Rapid’s old 1.6-litre petrol and 1.5-litre TDI diesel engines; and in comes the 110hp, 1.0-litre three-cylinder TSI petrol. As on the Vento, the engine will be available with 6-speed manual and torque converter auto gearbox options.

The Rapid appeals for all the same reasons as the Vento, with the solid build and that European-car feel leading the list. On the flip side, the Rapid has started to look its age on the inside and isn’t the roomiest of models either. But if the new petrol engine could make the Rapid, well, rapid, Skoda could still be in the fight.