Scheduled to launch on February 14, we pit the upcoming Mahindra XUV300 against the Hyundai Creta, Maruti Suzuki Vitara Brezza, Tata Nexon and Ford EcoSport, on paper. 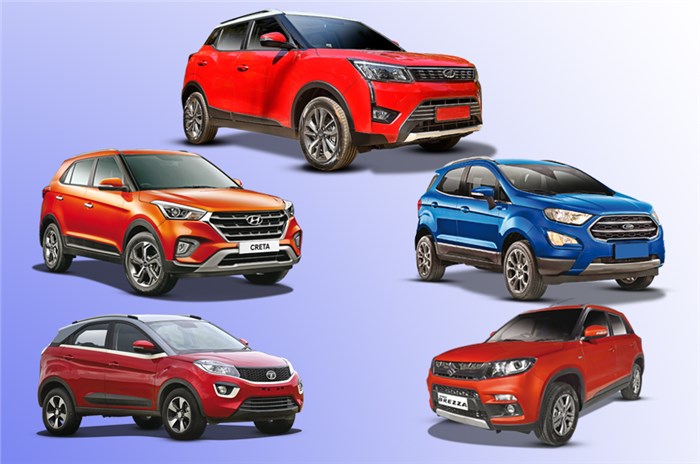 Perhaps the most awaited launch of this year from Mahindra, the XUV300’s prices will finally be revealed on February 14. Based on its expected Rs 8-12 lakh (ex-showroom) price tag and its extensive features list that includes many segment-firsts, the XUV300’s natural rivals will be Tata’s, Maruti Suzuki’s and Ford’s compact SUVs and also include an SUV from the segment above, the Hyundai Creta. We pit the XUV300 against the Hyundai Creta, Maruti Suzuki Vitara Brezza, Tata Nexon and Ford EcoSport, on paper.

The XUV300 meets Mahindra’s claims of being the widest in class and having the longest wheelbase. Interestingly, the XUV300 is even larger than the Creta on these two metrics, which indicates that the Mahindra may have the roomiest cabin. While the Creta is the longest and tallest SUV here (obviously, as it is technically a segment above the compact SUVs), the XUV300 and Hyundai have the largest wheels with the chunkiest tyres. However, the XUV300 has the smallest boot and fuel tank in this comparison. It may also be relatively less manoeuvrable than the Nexon and Brezza in tight urban environs due to its turning circle.

Mahindra had earlier claimed that the XUV300 will have best-in-class torque figures, and the numbers show it to be true.

The XUV300’s turbo-petrol engine (essentially the same 1.2-litre three-cylinder mill found under the bonnet of the KUV100 NXT, but turbocharged and updated) joins a number of turbo-petrol compact SUVs. The EcoSport’s smaller 1.0-litre turbo-petrol is the most powerful of the lot, though the Ford also comes with a nearly as powerful 1.5-litre naturally aspirated motor. The petrol XUV300’s 200Nm torque figure is the highest by a good 30Nm margin.

The diesel engine in the XUV300 comes from Mahindra’s Marazzo MPV, though in a different state of tune. Like its petrol counterpart, the XUV300’s diesel engine has the highest torque, which is even more than the Creta that has a larger-displacement 1.6-litre diesel. However, the 128hp diesel Creta is the most powerful SUV. Out of the sub-four-metre models, the XUV300 has the most power.

An automatic gearbox on the XUV300 will arrive at a later date. Meanwhile, rivals like the Vitara Brezza and Nexon get cost-effective AMTs and the Creta and EcoSport boast more sophisticated torque convertor units that give them an advantage in terms of convenience.

A point to note is the Vitara Brezza’s Fiat-sourced 1.3-litre diesel has the smallest displacement and lowest output figures, but is the most fuel-efficient SUV in this comparison.

As we have reported previously, the XUV300 is quite well-kitted in its range-topping W8 (O) trim and features a number of segment-firsts, whether in safety kit or technology. Equipment levels are quite a bit more than on the Maruti Suzuki and the Tata, and are even a notch above the Ford EcoSport and Hyundai Creta. Mahindra has made sure its product is unique in the segment with technology like a mild-hybrid setup on the diesel XUV300 and steering modes that alter steering weight. Tata offers multiple drive modes on the Nexon (much like the rest of Tata’s newer range of cars), which is still a segment-first. The EcoSport is also very well-specced in its top-spec variant, with a segment-leading 8.0-inch touchscreen infotainment display and HID headlamps.

The Nexon and Vitara Brezza have been crash tested by Global NCAP, scoring five stars and four stars, respectively. The SsangYong Tivoli, which is based on the same X100 platform as the XUV300, achieved a commendable four-star Euro NCAP rating.

Based on Mahindra’s claim that they will price the XUV300 in the Rs 8-12 lakh (ex-showroom) region, its rivals should be prepared to give up some of their market share. Even lower-spec variants of the XUV300 are quite decently kitted, and are expected to go head-to-head with the Nexon and Vitara Brezza, while the higher variants will match the EcoSport and Creta on price and offer more in terms of kit.

A proper road test and comparison between the Mahindra XUV300, Hyundai Creta, Maruti Suzuki Vitara Brezza, Tata Nexon and Ford EcoSport will be needed before coming to a definitive result. While its price tag has not yet been revealed, on paper, the Mahindra seems to be a well-rounded and feature-rich, if slightly expensive, alternative to its competition.