See how the upcoming Toyota Yaris matches up on paper against its competition like the Honda City, Hyundai Verna and Maruti Ciaz. 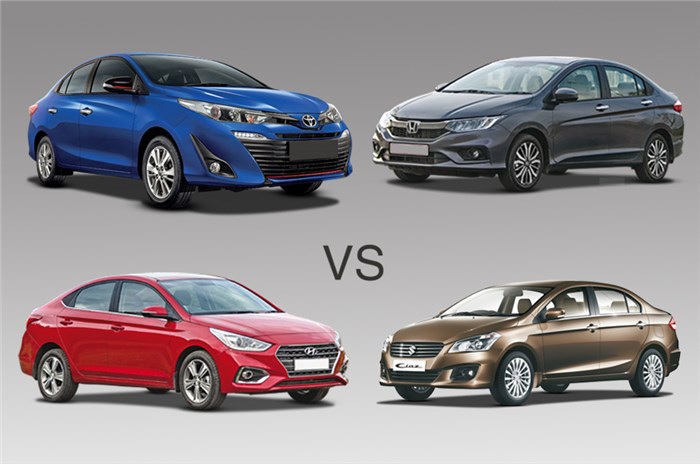 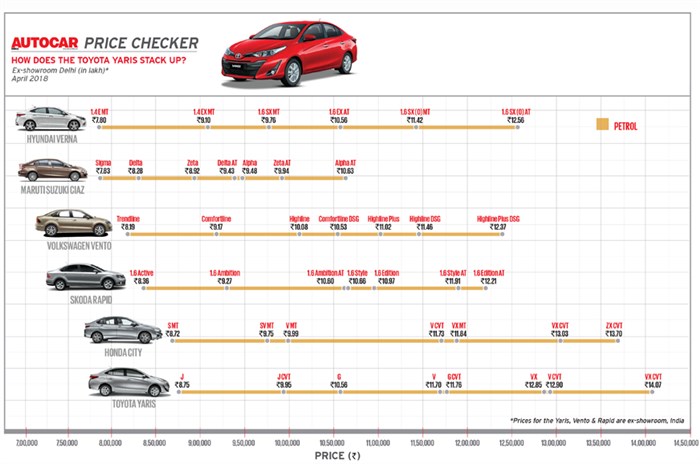 Toyota has launched the Yaris mid-size sedan in India. With the new Yaris, the Japanese brand is looking to plug the gap in its line-up between the Etios sedan and Corolla. The Yaris will rival the likes of the Hyundai Verna, Honda City and Maruti Ciaz in the Indian market. Toyota dealers have already started accepting bookings with the booking amount set at Rs 50,000.

Here’s how well the Yaris does on paper in comparison to its competition:

Exteriors
There is little between the Toyota Yaris and the Honda City, Hyundai Verna and Maruti Suzuki Ciaz in terms of width and height. However, the Yaris is shortest in length while the Ciaz is the longest. Perhaps of greater relevance is the fact that the Yaris also has the shortest wheelbase of this quartet. The Yaris’ 2560mm wheelbase is 40mm shorter than that of the City and Verna, and a full 90mm shorter than that of the Ciaz. Also of note is the fact that the Yaris comes with only 15-inch wheels while higher variants of the City, Verna and Ciaz get larger 16 inchers.

Safety and features
Toyota is offering a segment-best 7 airbags as standard across the Yaris range. Hill start Assist, Vehicle Stability Control and rear disc brakes are part of the safety kit on the top-spec Yaris VX. The City, Verna and Ciaz get dual airbags as standard while range-topping versions of the Honda and Hyundai see the airbag count rise to 6.

Talking of the range-topping versions of these cars, there are features you’d find on all such as touchscreen infotainment systems, rear air-con vents (the Yaris’ are uniquely mounted on the roof), and leather upholstery. The Yaris does go one up on the others with a few class-first features such as a tyre pressure monitoring system, front parking sensors, powered driver’s seat adjust, gesture control for the infotainment system. The City and Verna are the only ones, however, to get a sunroof. Notably, LED headlights are only offered on the City while front seat ventilation is a feature exclusive to the Verna.

Engines
Unlike its rivals that also get a diesel engine option, the Yaris will only be offered with a petrol engine. Toyota’s 1.5-litre naturally aspirated, four-cylinder, petrol engine is down on power and torque compared to the Verna’s 1.6-litre mill and the City’s 1.5-litre unit, though it comfortably out-powers the Ciaz. However, the top-spec version of the Toyota is a bit lighter than rivals, which can mean that performance may not be too far off the mark. The six-speed manual gearbox on the Yaris should also help achieve better mileage while cruising down the highway. While all four cars are available with automatic options, only the Yaris and City offer paddleshifters for manual gearshifts.

Pricing
In terms of pricing, Toyota has priced the Yaris slightly above it main rival, the Honda City (8.71- 13.70 lakh) with the base trim commanding a Rs 4,000 premium and the top-spec automatic commanding a Rs 37,000 premium. The Yaris' other rivals in the mid-size segment undercut the Toyota by a wide margin - the Ciaz is the most affordable of the lot while the Verna starts high at Rs 9.8 lakh for the base 1.6-litre version (the Verna is also available with a cheaper 1.4-litre motor priced at Rs 7.8-9.1 lakh) but ends at a respectable Rs 12.6 lakh for the top-spec automatic (all-prices, ex-showroom, Delhi).

Honda, Hyundai and Maruti Suzuki have been closely tied in the mid-size sedan segment with their respective models. At these prices, the Toyota Yaris may be able to get a toe-hold in this segment, if it can leverage its advantage as a maker of reliable, efficient and easy-to-drive cars. This may yet turn into a four-way battle for mid-size sedan segment supremacy.

Does the Yaris meet your expectations of a mid-size sedan from Toyota? Let us know in the comments section below.