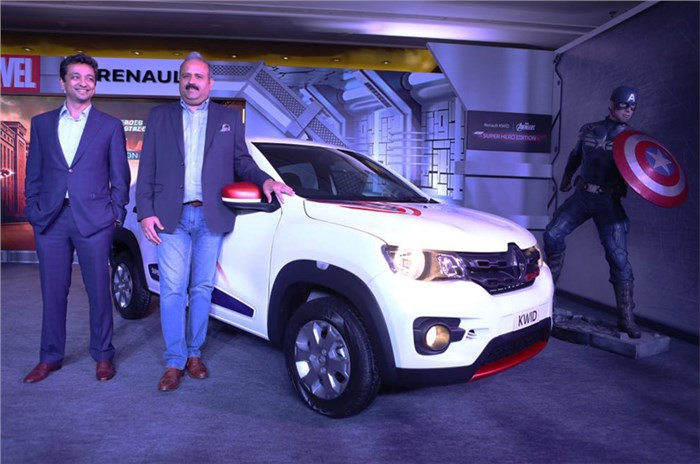 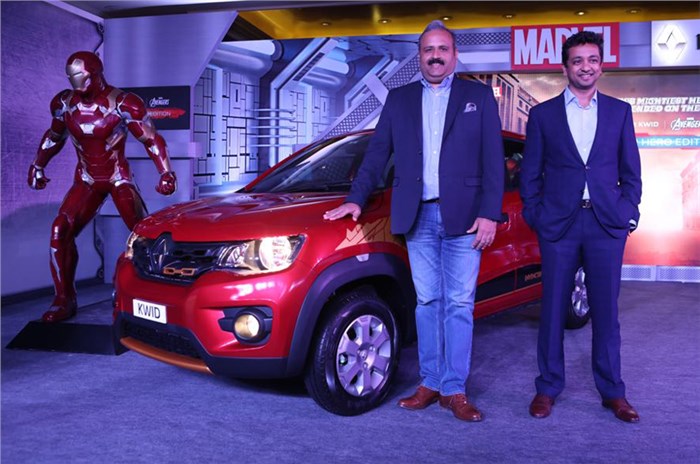 Renault has launched a new special edition of its Kwid hatchback, called the Superhero Edition, with prices starting at Rs 4.34 lakh (ex-showroom, Delhi). This model is the second special edition from Renault in 2018. Bookings for the Superhero Edition are open for an amount of Rs 9,999, and can be done exclusively on Amazon.in. Both models will be showcased at the upcoming Auto Expo 2018.

The Superhero Edition cars have been launched thanks to atie-up with Marvel owner Disney, and get decals and graphics that represent the superheroes (from The Avengers movies) they are named after – Iron Man and Captain America.

The Iron Man edition gets a bright red paint scheme with gold decals on the sides, near the roof spoiler and an 'Invincible' badge on the rear door. There are also gold touches in the headlamp and fog lamp housing, meant to mimic the superhero’s iconic arch reactor power source and his armour.

The Captain America version is finished in white and gets blue and rear decals on the bonnet, sides and on the outside mirrors, along with 'Super Soldier' badges on the rear door. As with the Iron Man edition, the decals on this one are meant to evoke Captain America’s iconic shield. Both models seem to borrow the Kwid Climber’s 13-inch alloy wheels.

On the inside, there’s are similar cosmetic changes to reflect the colour schemes of the Marvel superheroes, and equipment levels are on par with the top-spec RXT (O) trim, which includes a 7.0-inch touchscreen infotainment system with navigation as standard.

Mechanically, the special-edition Kwid is unchanged from the standard model and is available only with the 68hp, 1.0-litre engine. A rotary-button operated five-speed AMT and a five-speed manual will be on offer with the new models.

Sales of the Kwid have seen a slide in recent months, which is one of the reasons why the French brand is looking at introducing special-edition models like the Kwid Live For More in the Indian market.

Rivals to the Kwid 1.0 include the Maruti Alto K10, Hyundai Eon and Datsun Redigo.