The Honda CR-V petrol is more fuel than its predecessor thanks to the new CVT gearbox; to launch on October 9 with bookings having opened. 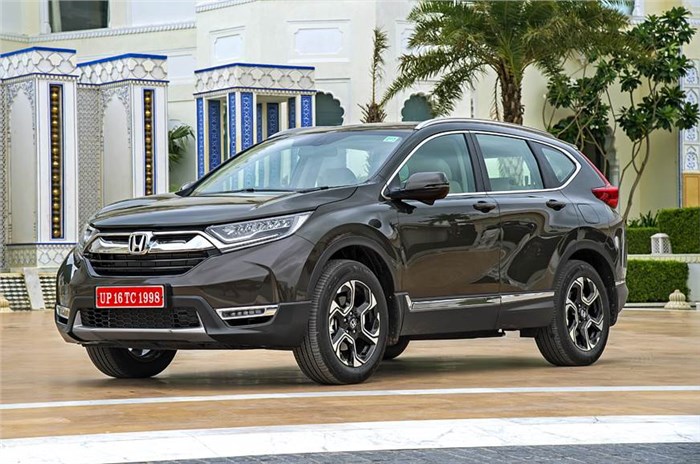 Honda will bring its new-gen CR-V to India on October 9, 2018 and has begun accepting bookings for the SUV. Besides seating for seven, a highlight of the fifth-gen CR-V is that it gets a new 1.6-litre diesel engine (a first for the SUV) that is mated to a 9-speed automatic transmission. This new motor develops 120hp at 4,000rpm and 300Nm of peak torque at 2,000rpm, all of which is sent to all four wheels. While the 2.0-litre naturally aspirated petrol engine, which develops 156hp at 6,500rpm and 190Nm at 4,300rpm, is unchanged, the 5-speed torque convertor automatic has been replaced by a CVT gearbox that sends power to the front wheels only.

Interestingly, the petrol-CVT combo on the new CR-V has seen claimed fuel efficiency figure rise by 0.4kpl to 14.1kpl, as compared to the outgoing model. The diesel-automatic powertrain, meanwhile, is rated at 18.6kpl. A common complaint of the outgoing model was its mileage, especially the larger 190hp, 2.4-litre petrol engine, which has an ARAI rated figure of 12kpl. This engine, however, will not be offered on the new CR-V.

To put these figures into perspective, let’s take a look at the CR-V’s competition. The Volkswagen Tiguan, with its 143hp, 2.0-litre diesel engine mated to a 7-speed dual-clutch automatic, has a fuel efficiency figure of 17.06kpl, while the seven-seat Skoda Kodiaq, powered by a 150hp, 2.0-litre diesel motor that is paired with a 7-speed dual-clutch automatic unit, is rated at 16.25kpl.

Hyundai’s Tucson is available with a 155hp, 2.0-litre petrol engine and a 185hp, 2.0-litre diesel motor, both of which get 6-speed manual and 6-speed automatic transmission options. Fuel efficiency figures are as follows: petrol-manual at 13.03kpl, petrol-automatic at 12.95kpl, diesel-manual at 18.42kpl and diesel-auto at 16.38kpl. The diesel-auto also comes with the option of all-wheel-drive, though its ARAI rated figure is unconfirmed and is almost certainly below the 16.38kpl quoted for the 2WD version.

Finally, the Mitsubishi Outlander, which is powered by a 167hp, 2.4-litre petrol engine and mated to a CVT automatic, has a claimed fuel efficiency figure of 10.2kpl.

Compared to its rivals, the petrol engine Honda CR-V’s mileage figures seem to be on-par, though the diesel CR-V outdoes its competition significantly, especially if one considers the fact that it gets an automatic transmission and all-wheel-drive.