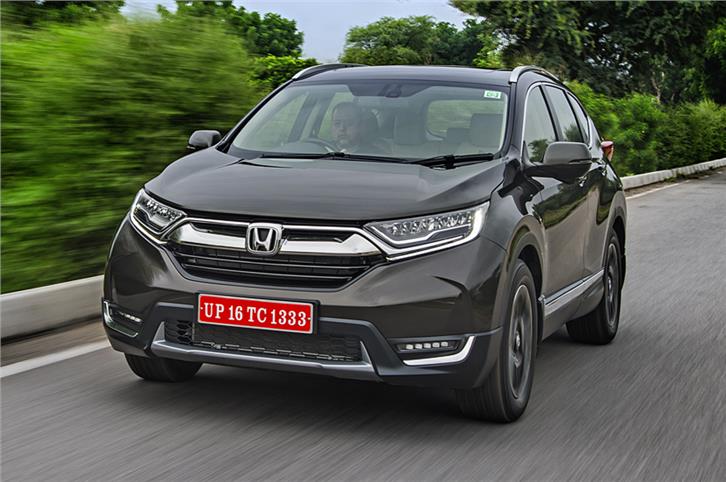 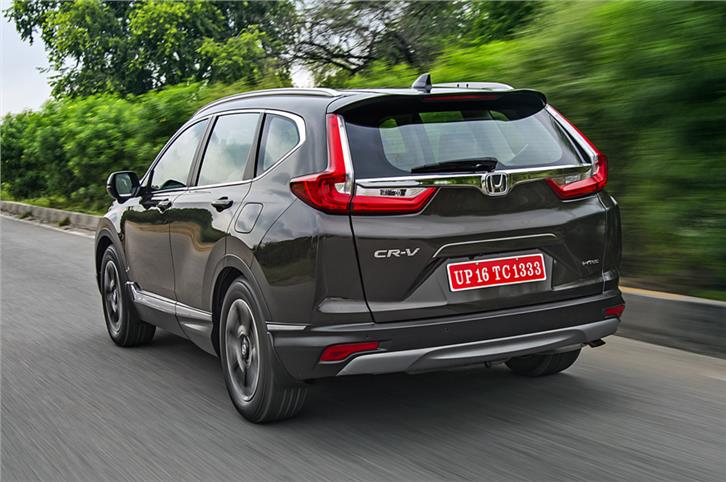 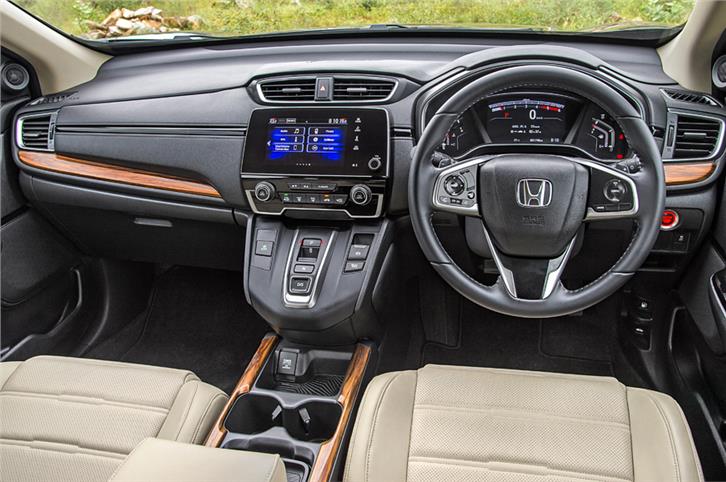 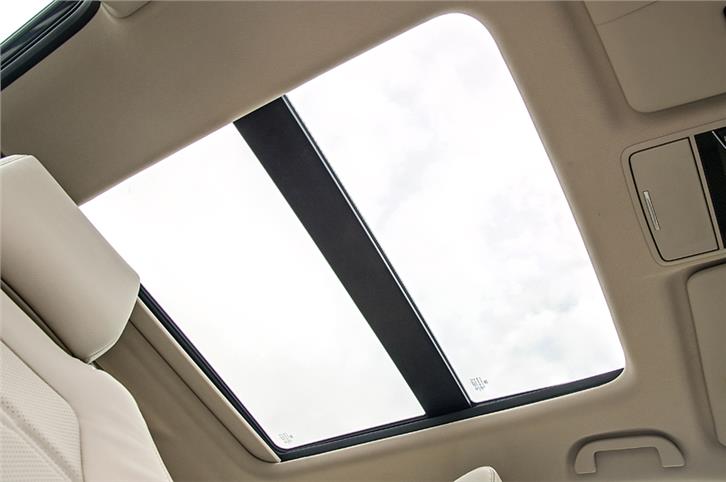 Honda's fifth-generation CR-V driven in India. Here's what it is like.

What you see here is the fifth-generation Honda CR-V (the fourth one in India) that will go on sale in India on October 9, 2018. Like every new car that goes on sale, it boasts of being bigger, better and comfier than the version it replaces. But this one is all that and more. It’s the first CR-V to feature a third row of seats and it’s also the first CR-V to be offered with a diesel engine in India. Seven seats immediately put the new CR-V in the radar of buyers with large families, while the diesel engine gives it the powertrain of choice for premium SUV buyers in India. According to Honda, the petrol-diesel skew is 10-90 in India’s premium SUV space, so the CR-V could indeed be a very big deal for the Japanese carmaker. 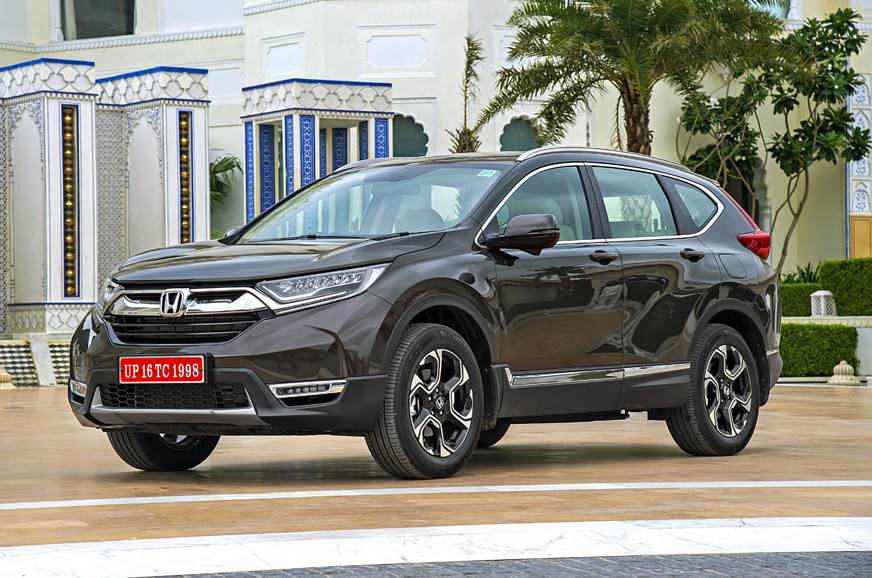 Being both, larger and bolder than the outgoing model, the new CR-V sure has more visual personality. It’s more sculpted at the front, the bulges on the bonnet give it some muscle and in general, there’s more ‘mass’ to the design. It’s not butch like your average ladder-frame SUV, but the monocoque-bodied CR-V is handsome and pleasing in look.

There’s a clear link to CR-Vs of old, though all the typical styling elements have been reinterpreted. The split grille gets the requisite bling with a thick band of chrome – a modern Honda trademark –while the full LED headlights with daytime running LEDs also add some dazzle. It’s at the sides that you can tell the CR-V is larger than any of its predecessors. The wheelbase is visibly longer, the glasshouse is that little bit larger and there’s more metal aft the rear wheel arches than before. Mind you, it doesn’t look stretched or awkward in the least. What undoubtedly helps its looks are the gorgeous and uniquely styled dual-tone alloy wheels. At the rear, the new CR-V can be identified by its 'L'-shaped tail-lamps that are sleek and also a break from the usual template. 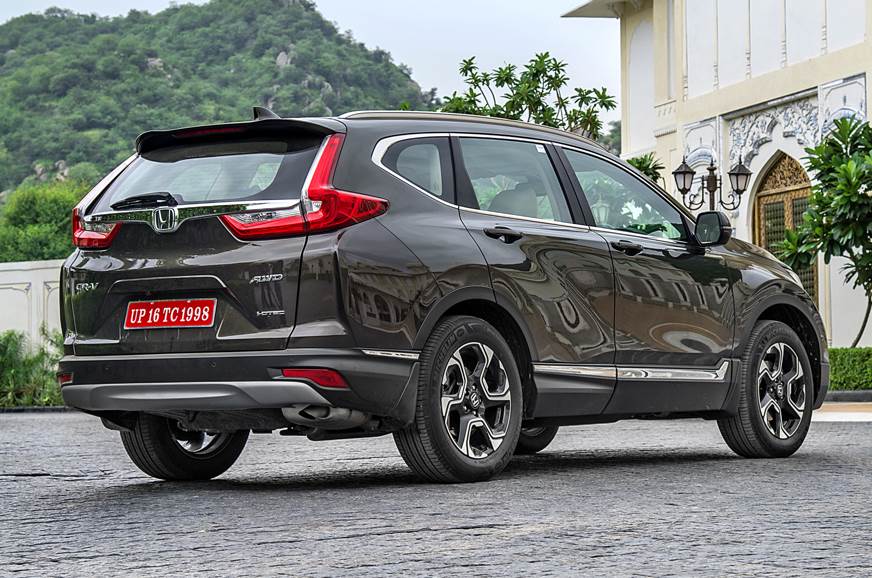 CR-Vs have always been popular for their practical and user-friendly cabins, and the latest one is no different. Ingress and egress for the front and middle row passengers is convenient, frontal visibility is really good and there are lots of thoughtfully positioned nooks and crannies to stow small items. What the new CR-V also does quite successfully is look more upmarket on the inside. Material quality sees a jump and while this is no German luxury car, you still feel like you are in something premium. No complaints about the dashboard either; it’s smartly laid out and positions the important controls within easy reach. Speaking of which, notice there’s no gear lever in sight? That’s because the diesel CR-V uses a button-operated transmission with the controls positioned on the centre console. It’s a cool design touch and gives the CR-V dash a clean look. The petrol CR-V, however, uses a conventional lever.

Of the other things, the touchscreen is reasonably nice to use, and notably gets Android Auto and Apple CarPlay too. Just wish the screen was larger – the 7.0-inch display looks a touch small amidst the frameless platform it sits on. You will find yourself taking readily to the snazzy fully digital instruments cluster that even displays a prompt when your CR-V senses you need to take a break from the wheel. Driver Attention Assist aside, the CR-V’s safety suite also includes ESC, Hill Start Assist, Lane Watch (it gives a wide camera view of the right side on the centre screen) and Isofix child seat mounts. 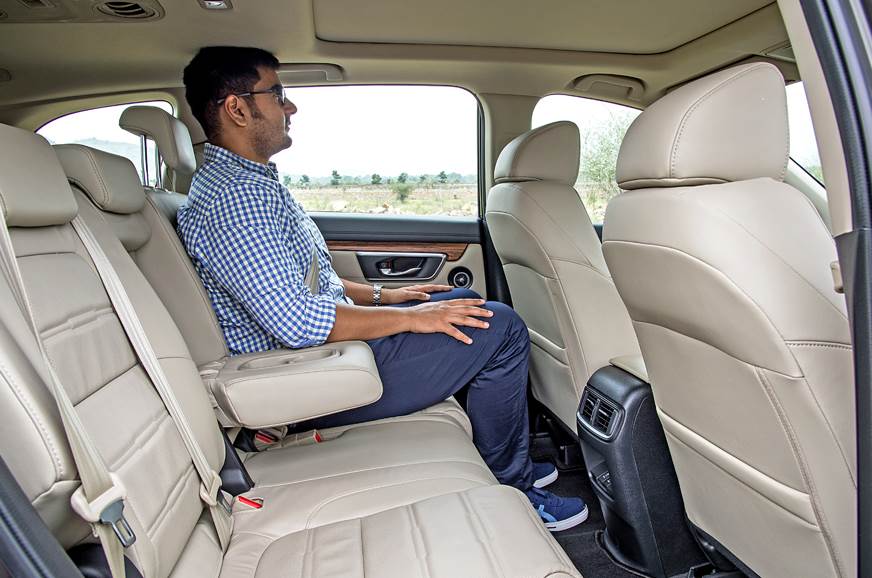 The CR-V also gets its fair share of feel-good features with auto LED headlamps, dual-zone climate control (it works effectively), a panoramic sunroof, electric parking brake, push-button start, leather upholstery, and an 8-way adjustable driver’s seat. Front seat comfort is really good but the second row is not perfect. While those of average height will find the seat to be comfortable, well cushioned and the ambience airy, those taller than 5ft 9 in are sure to have their heads touching the roof. Accommodating the mechanism for the panoramic sunroof has lowered the roof lining, and, as a result, headroom in the second row is affected. You do have the option to recline the seat back to add a vital few centimetres for your head.

Now coming to the cabin’s talking point – the third row of seats. Ahem, the news isn’t so good. The process to pull and flip the middle seat out of the way is cumbersome, and access requires a certain yogic ability. Average-sized occupants will find the space to be cramped and the seating position uncomfortable on anything more than a short commute. You can free up some knee room by sliding the middle row forward but, frankly, this is a space best for kids. Do note, only the diesel CR-V gets the third row of seats. The petrol CR-V has the standard five-seat layout, with rear seats that sit absolutely flush with the boot floor (taking space up to 1,084 litres) should the 522 litres of luggage room prove insufficient. The diesel CR-V offers 150 litres of room with all seats up, 472 litres with the third row folded and 936 litres with the second row folded. A clever touch on the seven-seat CR-V is the adjustable boot floor that can be raised to create a flat loading bay. 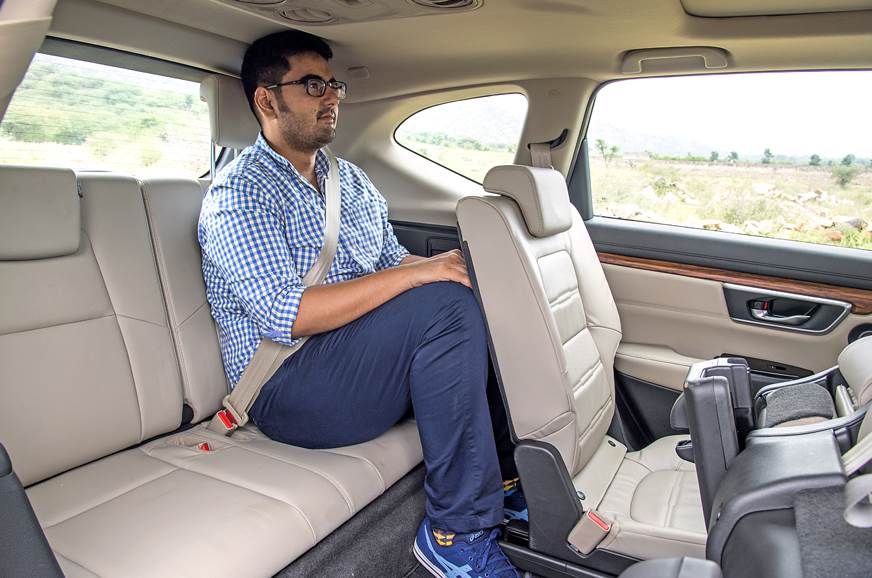 The CR-V continues to be offered with a petrol engine, but the one of more interest is the new diesel engine, a first for the SUV in India. The unit is a 1.6-litre i-DTEC unit form Honda’s Earth Dreams engine family. While the said engine is available in a 160hp, twin-turbo form abroad, India gets the 120hp,single-turbo version. Sure, 120hp doesn’t sound like much on a premium SUV but should the low power figure be a deal breaker? For the majority of CR-V buyers, the answer will be no. Performance is not electrifying, as you’d imagine, but for the average intracity commute or highway cruise, it works just fine. Power comes in smoothly and what really brings out the best from the engine is the nine-speed torque converter automatic transmission. The smooth-shifting gearbox is quick to respond to inputs at the throttle and is also responsive to manual inputs at the paddles. The short lower gears allow brisk acceleration, while the tall higher gears give the CR-V long legs for highway cruising. When you do feel the engine’s lack of outright punch is when you want to make a quick overtake. It’s at such times that you wish the engine had more to give, especially in the mid-range. Drive in a measured manner, however, and you’ll actually like the CR-V’s diesel engine for its refinement and easy-going nature. 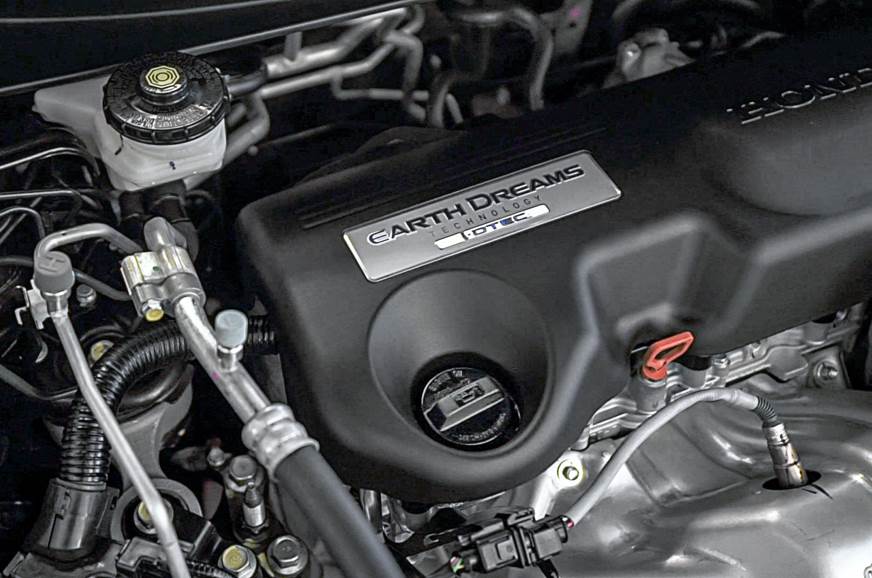 Ironically for a Honda, it’s the petrol version that’s less impressive. The 2.0-litre i-VTEC engine produces 154hp and 189Nm which, though not shining figures, are par for the course for this class of car. Transmission duties are taken care of by a CVT. The petrol engine is quiet at idle and in low- speed environs but it does get riled up when you weigh down on the throttle; the CVT is to thank for that. Performance is fair but the build of power is flat and offers little for the petrolhead. Drivers will also feel a bit left out of the experience as there are no paddleshifters or tiptronic controls to shuffle between the artificial steps of the gearbox. That said, the CR-V petrol feels at home in the hustle and bustle of town, which should suffice for most buyers.

The CR-V does scores well in the areas of ride and handling. Be it the front-wheel-drive petrol or the all-wheel-drive diesel (there’s a front-wheel-drive diesel too), the steering is well-weighted, turn-in is neat and handling, in general, is tidy. It’s not chuckable per se like the third-gen CR-V was, but the fact that it feels solid and stable at highway speeds is what will be of more interest to the average buyer. The CR-V’s suspension is absorbent at all speeds, and, in general, it drives with a pleasing confidence over patchy surfaces. Body movements are well contained too. A word on the brakes as well: pedal feel is excellent, the brakes are well calibrated and stopping power is strong. 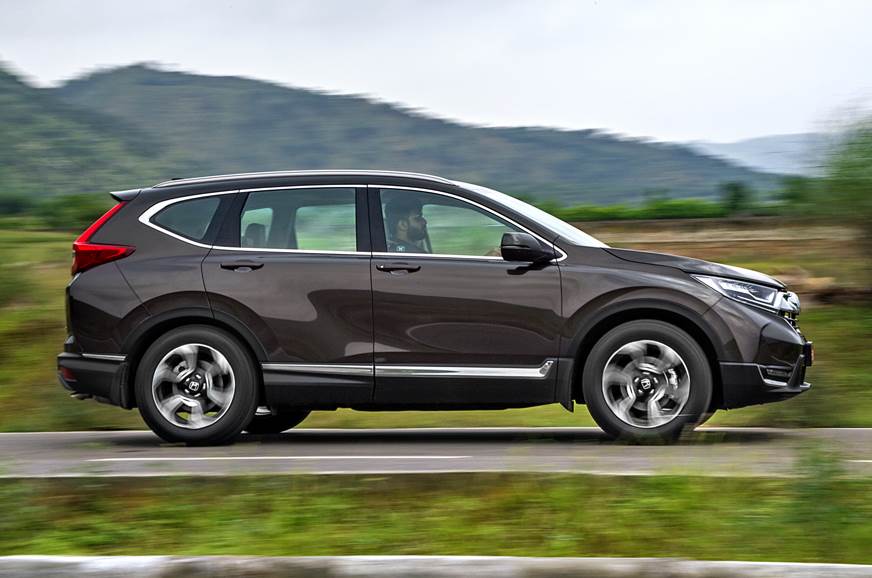 Unfortunately, we didn’t manage to put the diesel CR-V test car’s all-wheel-drive system to the test in a fitting environment. The all-wheel-drive system powers the front wheels as standard and can transmit up to 40 percent torque to the rear axle when required. Interestingly, the AWD-equipped CR-V also sits higher up with a ground clearance of 208mm versus the front-wheel driver version’s 198mm.

The new CR-V improves upon all that we’ve liked about the model and rounds off the package with the long-overdue inclusion of a diesel engine and the added practicality of a third row. Sure, the diesel could have had a bit more power and the third row is for occasional use at best, but for the typical urban SUV buyer, the CR-V offers the right ingredients in a refined, comfortable and contemporary package. Prices start from Rs 28.15 lakh for the petrol and go up to Rs 32.75 lakh for the diesel with all-wheel-drive (ex-showroom, India). That’s a whole lot of money for a Honda, but if you think about it, the CR-V is also a whole lot of SUV from Honda.