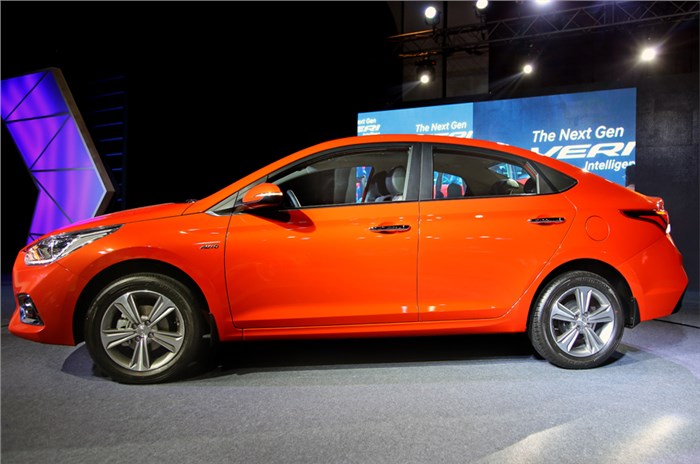 The next-gen Hyundai Verna has launched in India with prices starting at Rs 7.99 lakh and going up to Rs 12.62 lakh (ex-showroom, Delhi). With prices out and bookings having commenced, we’ve compiled a list of everything you need to know about the fifth-generation Verna.

1. New platform
The India-bound Verna, while visually similar to the older model, is based on a new platform dubbed K2. The extensive use of high-strength steel has reportedly improved the sedan’s crashworthiness and rigidity. The new platform and improved body structure is also claimed to help reduce NVH levels.

2.  New suspension setup
The mid-size sedan also comes with a new suspension setup. Hyundai says this well help improve the car’s handling and ride quality. A complaint on the previous model was that it didn’t feel buttoned down to the road at high speeds and had a fair bit of vertical movement on gentle undulations. The new suspension setup, along with the stiffer chassis, should aid in mitigating this downside.

3. 1.6-litre petrol and diesel engines have been retained
The new Verna comes with the same 1.6-litre petrol engine capable of 123hp and 151Nm of torque and the 1.6-litre diesel making 128hp and 260Nm of torque. At launch, these will be the only two engine options available. There is no word on the 1.4-litre diesel engine being offered but it may come later. The ARAI fuel efficiency figures have improved marginally when compared to the previous model. The petrol-manual now delivers 17.7kpl (an increase of 0.7kpl) while the petrol-automatic goes 15.92km on a litre of fuel (up by 0.2kpl). The diesel-manual combo’s claimed fuel efficiency has risen by 0.85kpl to 24.75kpl and the diesel-automatic version’s fuel economy has increased by 0.9kpl to 21.02kpl.

4. New transmissions on offer
While the engines may be the same, the new Verna gets a six-speed manual for both engines; the previous petrol model had a five-speed manual ‘box. The older four-speed automatic gearboxes have also been replaced with new six-speed torque converter automatics.

5. Bigger on the inside and outside
The all-new Verna is 65mm longer, 29mm wider and has a wheelbase that is 30mm longer than the previous-gen model. It is now 4,440mm long, 1,729mm wide, 1,475mm tall, and has a wheelbase of 2,600mm. The rear headroom has also increased by 3mm to 948mm while the boot space and fuel tank capacity are up by 20 litres (480 litres) and 2 litres (45 litres), respectively. In terms of equipment, the Verna is now on-par with its rivals but also offers a segment-first, cooled and ventilated front seats.

The fifth-gen Verna will rival the likes of the Honda City, Maruti Ciaz, Skoda Rapid and Volkswagen Vento in the Indian market when launched.