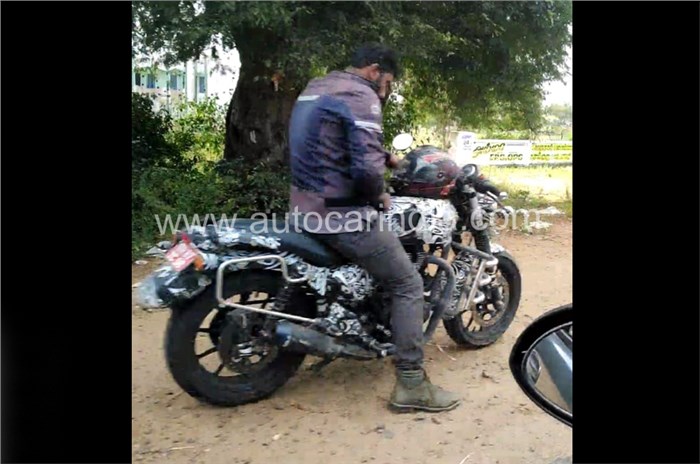 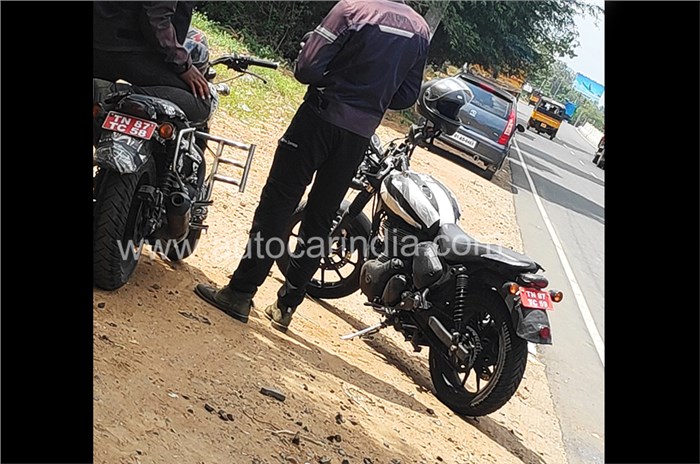 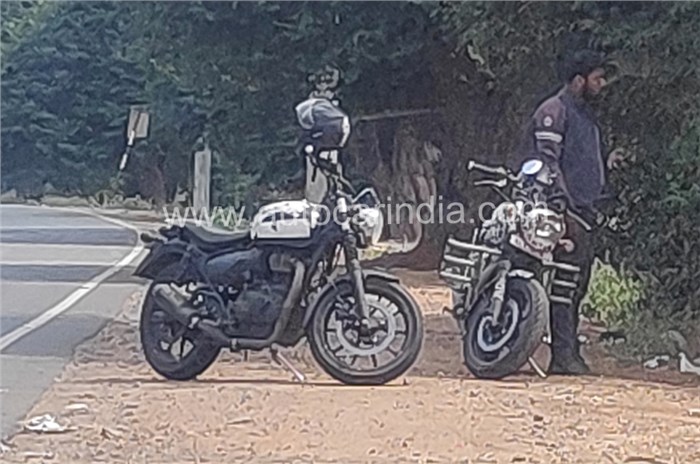 The Royal Enfield could be the new Thunderbird X or it could be a completely new model.

A new set of spy images reveal what might be a completely new model inbound from Royal Enfield. At first glance, you would think this is the upcoming Thunderbird, which has been spotted on multiple occasions, but a closer inspection tells a different story. The low-slung stance is unlike any other Royal Enfield motorcycle.

Here’s what’s different from the Thunderbird that has already been spied:

Firstly, the motorcycle in these images has a lower, sleeker stance than the spotted Thunderbird. This bike has a single seat, which is also flatter than the split-seat configuration on the other bike. The tail-light on this motorcycle is not only positioned slightly higher, but also has a different shape. The regular bike has a round unit, while this one is slightly oval. Another difference is that the turn indicators are mounted higher on this bike. It has to be said that single seat and oval tail-light are similar to the one on the outgoing Thunderbird X.

The side panels on this bike are more in line with the triangle-shaped ones from the company’s outgoing range, while the ones on the next-gen Thunderbird spied repeatedly are slightly elongated.

That’s not where the differences end though. The muffler on this bike is stubby and upward-swept, which is new for a Royal Enfield. Another big difference is the location of the foot pegs, they’re mid-set and not forward or forward-mid-set like we've seen on Thunderbirds so far. While the fuel tank appears to be the same as the other bike, the one here appears to be positioned slightly lower.

Let’s begin with the front. The bike in these images appears to have the same headlight, fork, and round digital instrument cluster like the Thunderbird that has been spotted before. It also appears to be using the new double-cradle frame that we’ve also seen on the spied images of the next-gen Classic. The engine, from what we can tell is also identical to the one we’ve seen before the matte-black finish on the engine casing is unchanged as well. The rear shock absorbers look similar too and so does the swingarm. Lastly, the V-shaped alloy-wheel design also appears to be the same.

What could it be?

Here’s the thing: Royal Enfield doesn’t have a direct rival to the Jawa Forty Two. While the Classic 350 can be considered competition based on price, its retro styling makes the Jawa a more fitting rival. This leads us to assume that this new model directly targets the Forty Two.

Having said that, the bike does share a significant amount of components with the Thunderbird we have seen being tested on numerous occasions. That means this could also be the new-gen Thunderbird X with a completely different styling strategy. Whatever the identity of this new bike, this is an exciting new direction for a Royal Enfield single-cylinder motorcycle and we can't wait to see the final result.