Listed: All motorcycles and scooters discontinued in the BS6 era 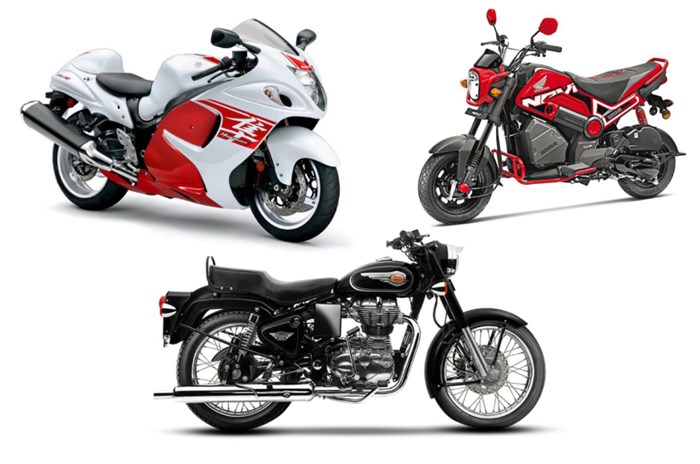 The BS6 deadline has brought an end to a number of models across various segments. Here’s a list of two-wheelers that have been axed, so far.

With the BS6 norms coming into effect, manufacturers have updated most of their offerings to comply with the more stringent emission norms, with more expected to be launched in the near future. However, the more stringent norms have also seen companies pull the plug on some of their models and we've compiled a list of the two-wheelers that won't be on sale any longer.

The Honda Navi drew inspiration from the unique 125cc Honda Grom that is a massive success in international markets. For India, it was toned down in more ways than one, and despite the initial hype it created back in 2016, it was eventually sought after only by those interested in its quirky styling. Its poor sales numbers led to the Japanese manufacturer announcing, earlier this year, that it will pull the plug on the Navi. However, it will continue to be exported to select international markets.

Going down with the Navi is the Cliq that shares a lot in common with it. The Cliq was targeted at rural India markets dominated by Hero commuter motorcycles but it failed to nab a slice of that pie. The Cliq used the same tried and tested 109.19cc engine from Honda's 110cc range in the same state of tune as the BS4 Activa 5G. This made it a promising proposition at the time but it, too, will no longer be on sale from now.

The first-generation Hero Pleasure made its debut as the Hero Honda Pleasure back in 2006 and after a rather successful 14-year run, it has been discontinued. Hero, however, has already filled that space with an all-new model called the Pleasure Plus. It replaces the dated 102cc powerplant from the now-discontinued model with a 110.9cc engine and it has also been redesigned. Click here to read out first ride review.

At the launch of the new Fascino 125 and Ray ZR 125, Yamaha also revealed a part of its strategy going forward. This includes the discontinuation of its current 110cc scooter line-up, with the Yamaha Cygnus Ray and Ray ZR being replaced by the Ray ZR 125. The sporty scooter features sharp styling that is targeted at the younger demographic. The new 125cc, fuel injected, air-cooled engine is capable of 8.2hp at 6,500rpm and 9.7Nm of torque at 5,000rpm

The Fascino was the other 110cc Yamaha scooter to be discontinued, despite doing considerably well in terms of sales. The Japanese manufacturer revealed that it aims to double its market share in the scooter segment by 2025, and with most scooters moving closer to the 125cc mark, Yamaha didn’t want to be left behind. Just like with the Ray Z, Yamaha has replaced the Fascino with the Fascino 125 that shares its powertrain with the Ray ZR 125. The new Fascino features an even more swoopy, Japanese-style design and you can read about it here.

The Honda Unicorn was launched back in 2004 and it continued largely unchanged for over a decade. Honda then attempted to replace it with the CB Unicorn 160 in 2015, but it didn’t achieve the same success. Heavy demand forced Honda to bring back the original Unicorn 150 and, over its 16 years of existence, it proved to be a hugely popular models, having sold a total of over 2.5 million units. But now, with the transition to BS6, Honda decided to kill the 149.2cc engine from the Unicorn 150 and replace it with a fuel-injected iteration of the 162cc engine from the Unicorn 160. The bike is now called the Unicorn and it essentially features the styling of the successful Unicorn 150, but with the updated engine. You can read about it here.

This has been long overdue. The CBR250R has remained largely unchanged ever since it debuted in India over a decade ago. It was even briefly shelved when the BS4 norms kicked in. Subsequent updates have been minimal, extending to an LED headlight and new colour schemes. Internationally, the CBR250R was replaced by the CBR300R a few years ago, but that bike never made its way here. The CBR250R is no longer on sale in most international markets and it has reached the end of its life over here as well.

The death of the Royal Enfield 500cc UCE (Unit Construction Engine) is probably the biggest one to happen due to the BS6 norms. All models featuring this engine – the Bullet 500, Classic 500 and Thunderbird 500 ranges – will no longer be on sale. The engine hasn't received any substantial updates since it came into existence – apart from meeting the necessary emissions norms over the years. Upgrading it to comply with the more stringent norms should have been possible, but the bigger issue is that the new 650 Twins sit uncomfortably close in terms of price but offer a world of a difference in terms of performance, refinement and dynamics.

It's been nearly two decades since Suzuki brought the legendary Hayabusa into the motorcycling world. After a glorious reign of being one of the fastest production motorcycles in the world, the brand decided to take it off the international market. This was back in December 2018. However, the Hayabusa lived on in India after having been made BS4 compliant. The BS6 emission norms, though, were a step too far and Suzuki has had to finally lay the mighty Hayabusa to rest. Happily, the Hayabusa moniker, will live on as patents for the next-generation model that have already surfaced on the Internet, and rumour has it that the new bike may debut at EICMA 2020