KTM has just launched the 890 Duke R overseas and we can now confirm that the bike is being considered for India as well. 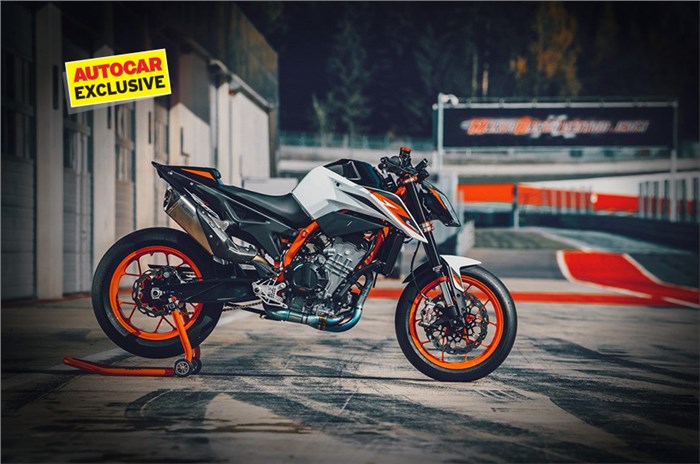 The KTM 890 Duke R made its first public appearance at EICMA 2019, but the bike is only now getting ready for sale in international markets. So far, there has been no clarity on its India plans, but we can now confirm that KTM India is evaluating the 890 R for our market and that it may launch sometime in the middle or second half of 2021. The current 790 Duke hasn’t done as well as KTM would have liked in India and that was entirely down to pricing challenges because the bike comes in as a CKD. The new 890 Duke R will follow suit, and it will be even more expensive; but then again, this bike also has a lot more to offer.

The first talking point is in the name itself. This bike gets a new 890cc parallel twin that is based on the 799cc motor from the 790 Duke. KTM has achieved the bigger capacity via small increases in both bore and stroke – by 2.7mm and 3.1mm, respectively. With a bore x stroke of 90.7 x 68.8mm, this is still quite a short-stroke engine and KTM has even managed to raise the rev ceiling by 250rpm. The compression ratio has gone up a fair amount as well, from 12.7:1 all the way up to 13.5:1, which raises questions about how happy this engine will be with our fuel, as well as how much heat it will produce. Perhaps hinting at the validity of the second point, KTM has given the 890 Duke R a bigger, curved radiator.

There are further internal changes, including a new, 20-percent-heavier crankshaft – KTM says this provides more stability under a range of conditions, including aggressive cornering. It also gets new connecting rods and pistons to fit the bigger dimensions, but somehow KTM has managed to make these lighter than the ones they replace. Revised injection maps per cylinder have supposedly resulted in better low-RPM behaviour, which is something the 790 Duke could do with.

The parallel-twin engine also gets more aggressive camshafts and the net result of all this is a sizable increase in power and torque. Where the 790 Duke produced 105hp and 87Nm of torque, the 890 takes that all the way to 121hp/99Nm.  Those numbers are almost identical to those of the 990 Superduke from 2007-2011, which was KTM’s top naked sport bike at the time! Another positive is that the increase in power should completely bridge the small but clear gap in top-end performance between the 790 Duke and Triumph’s marvellous Street Triple RS.

Same chassis, but with some tweaks

Chassis-wise, it would appear that the only difference is that the 890 is built around an orange-coloured version of the 790 Duke’s tubular steel frame. And while that is mostly correct, there are a few small differences. KTM has sharpened the steering rake angle by a tiny 0.3 degrees, but the trail figure and wheelbase have both gone up slightly. What’s also interesting is that ground clearance has taken a big jump, going up from an already very high 186mm to an even higher 206mm, which is more than a KTM 390 Adventure! Consequently, the seat height is also more, by a fair amount, up from 825mm to 834mm – KTM’s website also quotes 840mm in a different area so we’re not sure which number is correct.

The rider will certainly feel a difference, because while the 790 Duke’s ergonomics are quite upright and comfortable, the 890 has a more aggressive riding position. You sit higher up and there’s a longer reach forward to a handlebar, which is now lower and flatter. The new foot pegs are larger, for better grip, but they’re also set a little higher and further back. Combine this with its greater ground clearance and the 890 Duke R will have even more cornering clearance than the already very capable 790.

More cornering clearance is a thrill on the racetrack and the KTM 890 Duke R packs some exceptional equipment for this purpose. The non-adjustable WP suspension on the 790 Duke makes way for fully adjustable units from the same company at both ends. And while we had no complaints with the J Juan brakes on the 790, the 890 Duke R offers the best OEM brake calipers Brembo has to offer – the Stylemas. It also gets new 320mm discs up front, that are 20mm larger, but because they use aluminium carriers, the discs are each lighter by 400g. Accounting for the lighter calipers (by 190g each) the entire braking system weighs a whole 1.2kg less. In total, KTM has managed to make the 890 Duke R 3kg lighter than the already featherweight 790’s 187kg kerb weight, which is worth applause.

Sticky, track-focused Michelin Cup 2 tyres (in the same sizes as the 790 Duke) will put the power down much better than the 790’s Maxxis rubber, but the 890 also has an extra trick up its electronic sleeve. Where the 790 made do with a 5-axis IMU, the 890 gets a 6-axis unit. This added layer of sensitivity will enable more finely controlled slides while applying power with the bike leaned over. The electronics suite otherwise includes all the other features seen on the 790 Duke, including riding modes, wheelie control, launch control, multi-stage traction control and more. However, in a strange, backwards step, the up/down quickshifter and the tuneable Track mode are now both optional extras, whereas they came as standard equipment on the 790.

UK pricing suggests that the KTM 890 Duke R costs about GBP 1,500 (around Rs 1.4 lakh) more than the 790 Duke. Considering all the extra kit you get, this is well worth the money, and the 890 Duke R appears to address every single criticism raised about the 790 Duke, which will continue to be on sale in BS6 form. If you’ve read our track and road reviews of the 790 Duke you will know that it is a highly capable and absolutely thrilling machine. With the extra power and equipment that the KTM 890 Duke R brings to the table, it could easily be the most potent, capable and rewarding machine in the segment.

We believe that this bike could launch in India sometime in the second half of next year at a price between Rs 10-11 lakh. When it does, we can’t wait to pitch it against the updated 2020 Triumph Street Triple RS (which was due to launch last week) to see which is the true king of the middleweight naked segment.