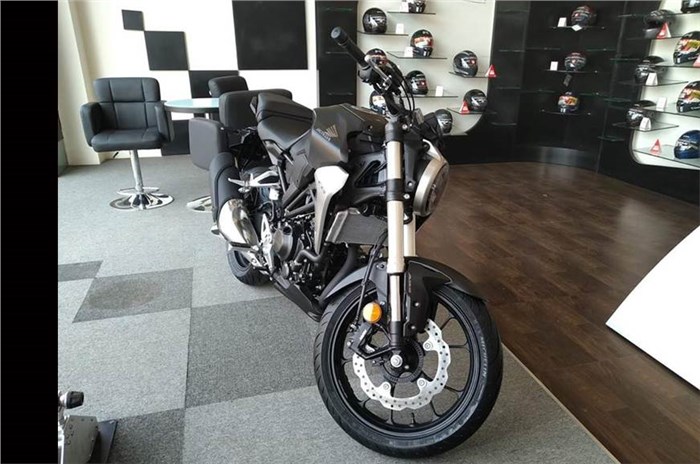 Honda has commenced deliveries of the CB300R in India. Launched early this year at Rs 2.41 lakh, the retro café-racer-styled naked motorcycle is available at Honda’s Wing World outlets located at 22 cities across the country. The bike maker had already received three months worth of bookings at the time of launch.

Now, exactly three months later, the first lot of motorcycles has been delivered to customers in Chandigarh, Jaipur, Delhi and Haryana. Other cities are expected it soon. The Honda CB300R is brought in via the CKD route and is decently equipped with features like an LED headlight, a digital instrument cluster and dual-channel ABS that uses an IMU (Inertial Measurement Unit) to improve the front-to-rear distribution of brake intervention – a feature usually seen on much larger motorcycles.

At the heart of the CB300R is a 286cc, liquid-cooled, four-valve, single-cylinder DOHC motor that is paired to a 6-speed gearbox. It makes 30.4hp at 8,000rpm and 27.4Nm of torque at 6,500rpm. These figures are slightly lower than the UK-spec model and the spec sheet of the India-spec CB mentions that it makes 1hp less at 8,000rpm (instead of 8,500rpm) and 0.1Nm of torque less at 6,500rpm (instead of 7,500rpm). At this price point, the output figures produced don’t seem very impressive. However, its low kerb weight of 147kg does. Despite weighing 4kg more than the UK model, the bike is still the lightest ones in the segment.

Honda has also announced that the CB300R will be available with 16 independent accessories that are also available as kits. The four kit options are Premium, Protection, Standard, and Sports. For a detailed breakdown of what each kit consists of and the prices,click here.