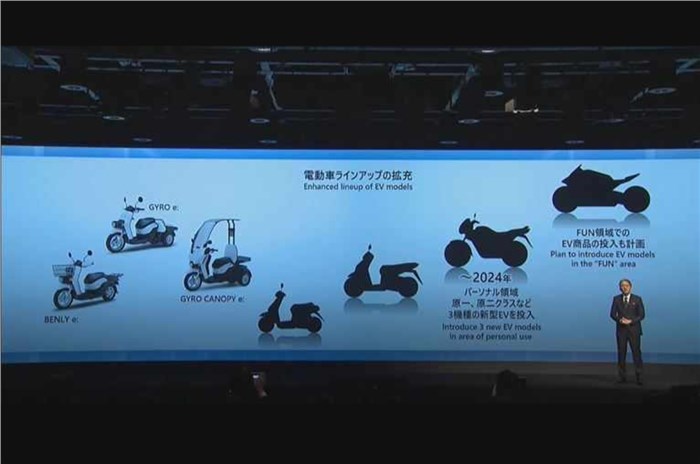 Honda's EV plans include three vehicles in what it calls the personal use space. The graphics released by the company show silhouettes of two electric scooters and one motorcycle. These electric two-wheelers are said to offer similar kind of performance that you get from a 50cc to 125cc petrol-powered two-wheeler.

Honda plans to also roll-out another electric motorcycle in what it calls the FUN category. While details about the EV haven't been revealed yet, it seems to be a high-performance electric motorcycle. At least, that's what can be inferred from the graphic of a fully-faired motorcycle.

While the unveiling of Honda's EV plans was meant for international markets, one cannot discount the possibility of Honda introducing an EV in India as well.

The electric two-wheeler segment in India has been gaining momentum with every manufacturer worth its salt entering the segment.

TVS has the iQube Electric, Bajaj has the Chetak and Suzuki is said to be readying an electric Burgman Street.

Then there's Ather Energy with the 450X and recently there's news of Hero MotoCorp tying up Taiwanese company Gogoro to launch electric scooters and battery swapping technology. And that's not all - cab aggregator Ola is coming up with an electric scooter and Hypercharger network of its own.