The new Panigale V2 replaces the 959 Panigale as the entry-level supersport in Ducati’s line-up. 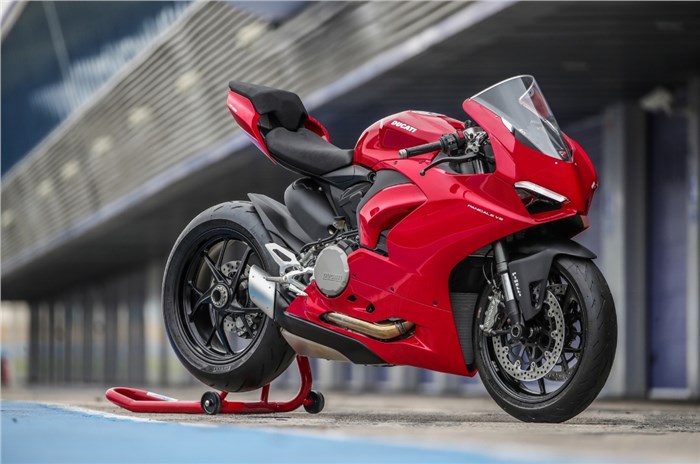 The new Ducati Panigale V2 is based on the outgoing 959 Panigale, but features a number of improvements. To begin with, the styling is inspired from the new Panigale V4 and in many ways it looks like a scaled-down version of it, replete with the single-sided swingarm. On the whole, the V2's sharp and aggressive styling is a big highlight.

Underneath the skin, however, the V2 is similar to the 959 Panigale as it shares the same frame. Only the subframe is all-new, in order to accommodate the raised tail section. The 43mm Showa big-piston fork has also been carried forward, but features revised internals, whereas the Sachs monoshock at the rear has a 2mm longer shock and a softer setting on preload.

Moving to the engine, the Panigale V2's  955cc Superquadro, twin-cylinder unit is based on the 959 Panigale's but has been upgraded to meet Euro5/BS6 emission norms. In the process, Ducati has managed to squeeze out 5hp more – the engine now produces 155hp at 10,750rpm and 104Nm of torque at 9,000rpm. The engine is paired to a 6-speed gearbox and a bi-directional quickshifter is now part of standard equipment.

Like almost every other Ducati sold in India, the Panigale V2 will come in as a CBU from the company’s manufacturing plant in Thailand. We had the opportunity to ride the Panigale V2 at its international launch in Jerez earlier this year, and you can click here to read about it.

At Rs 16.99 lakh, the premium that the Ducati Panigale V2 demands over the 959 Panigale puts it in a segment above. In this space, it rivals litre-class motorcycles like the BMW S 1000 RR, prices for which start at Rs 18.5 lakh.