The bodywork has been finished in pearl white, with red accents on the air vents under the headlight and side fairing, and with red wheels. 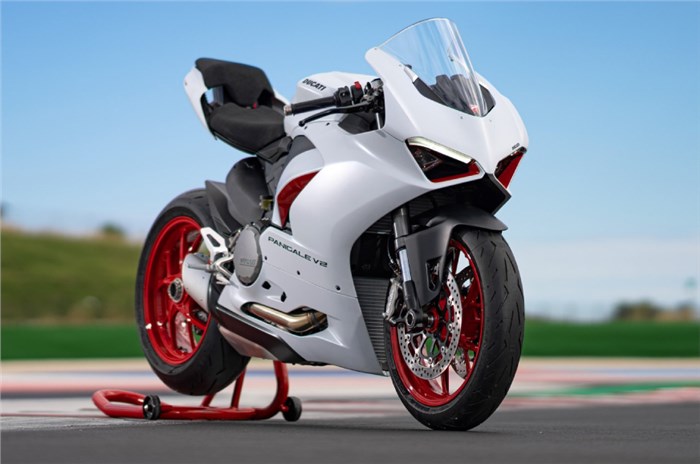 Ducati has unveiled a “White Rosso” colour scheme for the Panigale V2. The V2 made its international debut at World Ducati Premiere, replacing the 959 Panigale as the entry-level supersport in the Italian bike maker’s line-up.

The new White Rosso (red) colour scheme will be available alongside the existing all-red finish. The bike’s bodywork gets a pearl white colour, while there are red accents on the air vents under the headlight and side fairing. The wheels are finished in red as well.

The rest of the bike remains untouched. It features the same Panigale V4-inspired design, down to the single-sided swingarm. Under the bodywork is the same frame and 955cc Superquadro engine that we have seen on the now-discontinued 959 Panigale, except that the motor is Euro 5 (BS6) compliant. It also produces 5hp more than the unit in the 959, which raises the maximum power to 155hp at 10,750rpm, while maximum torque produced is 104Nm at 9,000rpm.

The Indian launch of the Panigale V2 was teased on Ducati India’s social media handles, but there hasn’t been an update on when it will take place. That being said, we can’t say for certain if the White Rosso colour scheme will be made available here. Its predecessor, the 959 Panigale, was available in similar colours internationally, but those were not made available here.

Given the additional kit and improved performance, we expect Ducati to price the Panigale V2 at a slightly higher price point than the 959 Panigale, which retailed at Rs 15.30 lakh (ex-showroom, Mumbai). Click here to read about our first impression of the Panigale V2 from our first ride event at the Jerez circuit in Spain.