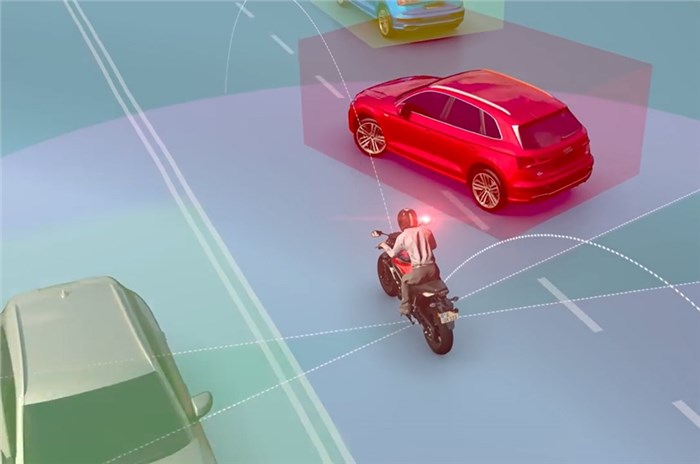 While collision avoidance systems are becoming more and more commonplace in four-wheelers every day, the technology is yet to make any sort of significant impact on the world of motorcycling. However, that looks set to change soon. Major manufacturers like KTM and Ducati have announced the introduction of these systems on their models as early as 2020.

An Israeli startup called Ride Vision has jumped on the bandwagon, as well. Their proposed system – called ‘Collision Aversion Technology’ – uses two wide-angle cameras for 360-degree vision around the motorcycle. Using the feed from these cameras, the system warns riders about an impending collision via warning lights integrated into the rear-view mirrors.

This is in contrast to most other rider assistance systems that use radar or lidar (or a combination of both) to detect the vehicle’s surroundings. KTM’s upcoming systems, for example, use forward- and rear-facing radar sensors to facilitate adaptive cruise control and a blind spot information system.

Ride Vision says that by using cameras instead of radar, they can significantly reduce costs involved. Unlike most other assistance systems, though, this one does not actually apply the brakes for you – so it is definitely a collision warning system, rather than a collision avoidance system.

Ride Vision does not appear to have a functioning prototype of their system yet, but it has revealed that it is in talks with a number of suppliers and motorcycle manufacturers regarding possible collaboration. The start-up has also just raised $2.5 million for its technology through seed-funding – the principal investor being Israel-based firm YL Ventures.

While it is true that a camera-based system almost certainly won’t be as capable or advanced as a radar-based system, it also aims to make rider assistance technology far more affordable and accessible than ever before.