Honda keeps Hero in its sights with less than 27,000 units separating the two. 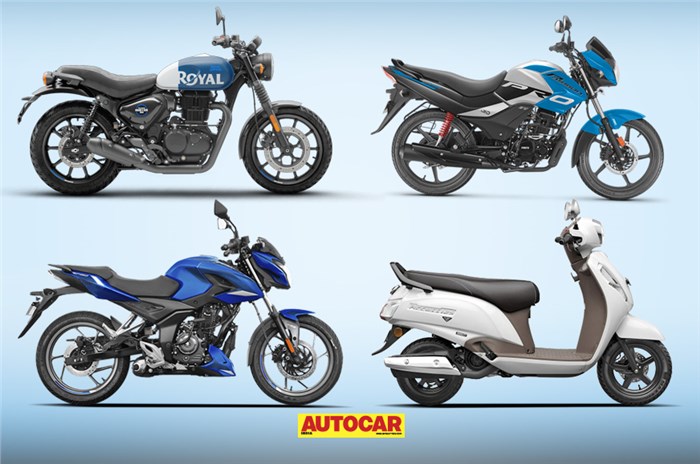 As we enter the final month of 2022, we bring you the monthly sales figures for the six heavyweights that dominate the petrol-powered two-wheeler marketplace. While all manufacturers have reported a decline in their numbers, Royal Enfield has managed to surpass Suzuki, despite retailing higher capacity products with more expensive price tags.

Hero MotoCorp’s downward trend continues, with it reporting sales of less than 4 lakh units for the first time since February 2022. Hero sold 3,79,839 units in November 2022, down a substantial 16.6 percent from the 4,42,825 figure it could manage in October 2022. However, compared to the 3,49,393 figure of November 2021, Hero managed to post a growth of 8.7 percent. Hero has also hiked the prices of its entire range, effective December 1, 2022. Recently, Hero’s sub-brand Vida opened its first showroom in Bengaluru, where its maiden offering, the V1, is on display and can be booked.

Continuing this downward sales trend is Hosur-based TVS, which reported a decline of 30.5 percent, compared to its October 2022 sales figure of 2,75,934 units. As with the aforementioned Hero and HMSI, TVS has managed to outsell its sales figure for November 2021, which stood at 1,75,940 units, marking a growth of 9 percent year-on-year. A recent addition to TVS’ product portfolio is the special-edition TVS Apache RTR 160 4V with a lighter ‘Bullpup’ exhaust.

Pune-based Bajaj Auto saw a decline of 40 percent in its domestic sales figures, when compared to its October 2022 tally, which stood at 2.06 lakh units. When compared to its November 2021 sales figure of 1,44,953 units, Bajaj Auto posted a decline of 15 percent year-on-year. Recently Bajaj launched the brand-new Pulsar P150 and a special Carbon Fibre colourway for its Pulsar 125.

Royal Enfield’s sales figures dipped by 14 percent, compared to the 76,528 units it sold in October 2022. Despite this, the Chennai-based marque was able to outperform Suzuki in terms of sales numbers. Year-on-year, RE has recorded a positive growth of 47 percent, when compared to its November 2021 sales figure of 44,830 units. Royal Enfield showcased its hotly-anticipated Super Meteor 650 cruiser at EICMA 2022, and it will be launched in India in January 2023. The Royal Enfield Himalayan received three new colours in November as well.

SIMPL, as with all other two-wheeler manufacturers, posted a 9.3 percent downsizing of its sales numbers, compared to the 69,634 units it sold in October 2022. Year-on-year, Suzuki fared much better with a growth of 21 percent. The Suzuki Gixxer 250 is amongst the top 5 most affordable 250cc bikes you can buy in India.