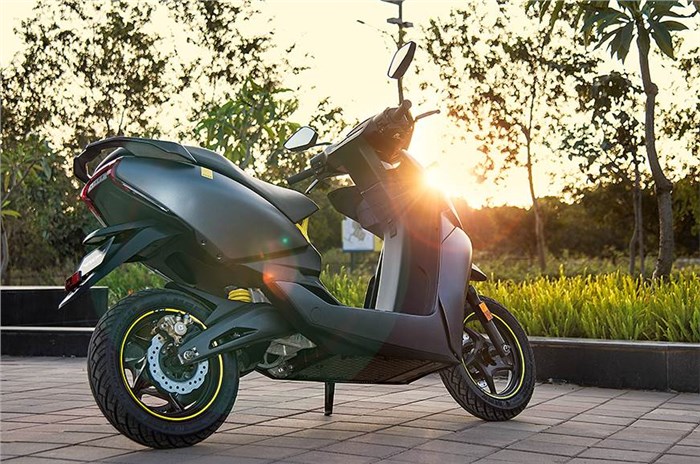 We explain the difference between subscribing to the Ather 450X versus buying it at full price.

Ever since the prices of the new Ather 450X were announced, there’s been considerable confusion and debate about the optional subscription plans. Some of the comments we received questioned the feasibility of these subscription plans (Plus and Pro), while some were curious about the benefits of the same. The company also offered the option of buying its new e-scooter without the subscription plans at an outright price of Rs 1.49 lakh and Rs 1.59 lakh for the Plus or Pro configuration, respectively. This has generated quite a bit of confusion and Ather has tried to clear doubts.

But before we begin, if you're wondering why the Ather 450X suddenly seems far more expensive than the old 450 that cost Rs 1.13 lakh (ex-showroom), it is because it is. The company says it was losing a lot of money on every scooter sold at that price and they simply couldn't keep it going at that rate. Even at these new prices, Ather says it still isn't making a profit, but it hopes to do so once the sales volumes ramp up over this year and the next, thanks to the company's expansion programme that kicks off this year.

The Ather 450X is, in essence, an evolution of the 450 – the company’s first electric scooter. It is lighter, quicker and packs in more features than its predecessor. The main change is the incorporation of a new, high-capacity battery and a re-purposed motor that develops a higher peak output of 6kW. The installed battery capacity is 2.9kWh (up from 2.71kWh in the 450) and that translates to an improved range. The motor’s peak torque has gone up, from 20.5Nm to 26Nm.  A newly introduced Warp mode ensures blistering performance, for an electric scooter, albeit at the cost of range. We were among the few who rode the Ather 450X recently and you can read about its improved performance here.

What do you get with the subscription plans?

If you opt for the subscription plan option, you’ll have to first invest Rs 99,000 (ex-showroom, Bengaluru) to purchase the 450X. The on-road cost should be around Rs 7,000-10,000 more than the ex-showroom price, and if you live in cities that subsidies electric vehicles, the price drops further. Delhi, for instance, offers approximately Rs 15,000 subsidy on electric vehicles. Now, once you’ve purchased the 450X, your monthly subscription plan begins. Think of these as performance packs, like a mobile service provider’s data speed plans, if you will.

At the moment, there are two plans on offer – Pro (Rs 1,999 per month) and Plus (1,699 per month). The Pro, as the name suggests, is the one that gets you the maximum performance possible. In this plan, the battery capacity is 2.7kWh (usable) and the battery range is 85km in Eco mode. The peak motor capacity is 6kW and it produces 26Nm of torque. These figures translate to a claimed 0-40kph time of 3.29sec and 0-60kph time of 6.5sec.

The Plus plan drops usable battery capacity to 2.4kWh and range to 75km in Eco mode. The motor’s capacity also drops to 5.4kWh, while peak torque falls to 22Nm. These are the main differences between the two subscription plans and customers can switch between them, as and when they like, throughout the time of ownership.

But the biggest benefit of choosing either subscription plans is the cost of a new battery when the time comes to replace one. Ather calls it infinite battery warranty and the company will replace the battery as soon as it degrades below 80 percent, without charging anything extra above the monthly subscription plan. This level of degradation in the battery performance, and consequently the scooter’s performance, is expected to occur after 3-4 years, based on usage cycles and other factors. Ather says that these monthly subscription plans are akin to filling up fuel in your ICE vehicle. But what if you don’t want the hassle of paying money on a monthly basis? There’s another option.

The Ather 450X can be bought upfront

If your usage isn't heavy enough, or if for any other reason you don’t see any merit in the monthly subscription plans, the 450X can also be bought by paying the full amount, just like you would buy a petrol-powered scooter. The 450X can be opted for in either the Plus or the Pro performance trims, which will set you back by Rs 1.49 lakh and Rs 1.59 lakh, respectively. However, you’ll have to bear in mind that once you’ve rolled off the showroom with your new 450X in the chosen trim, you cannot switch between the two performance packs. So, you are saddled with the chosen performance level for the rest of the scooter’s lifetime.

Then there’s the cost of replacing the battery once the warranty period is over. Buying the 450X upfront gives you a 3-year battery warranty only. Once the battery performance degrades below 70 percent, the overall performance of the scooter will also drop and when the time comes to replace the battery pack, the cost of one will have to be factored in. There is some math involved in the cost of a new battery pack against the one that’s being replaced, and the final price will be calculated keeping in mind the used battery’s available life, number of charge cycles and other factors.

One can continue to run the e-scooter in the chosen configuration, especially on the software side, for as long as they’d want. This means no updates, connected services, etc.  But, those of you who are looking to avail some of the benefits that the connected technology offers, Ather is offering the ‘Ather Charge’ pack for Rs 400 a month. This gives owners access to all connected services and data charges, access to the public charging Grid and future OTA updates. Data storage costs are included as well.

Now, if you buy the vehicle outright, you end up paying nearly the same amount – Rs 1.49 lakh and Rs 1.59 lakh (ex-showroom) for the Plus and Pro, respectively – if you think of sticking with the scooter for three years. But this is minus the benefits of the subscription plans, including the unlimited battery warranty. And if you choose the Ather Charge plan at Rs 400 per month, the cost works up to Rs 14,400 for three years and Rs 24,000 for five years, over and above the upfront cost of the scooter.

If you look closely, the price difference between the subscription plans and the outright costs isn't significant, considering the extra benefits that the former offers. In fact, Ather says that the subscription plans cost them more than the outright sale. What you do need to consider is the exact duration for which you intend to keep the scooter, the usage pattern and the need to stay up to date with the upgrades.