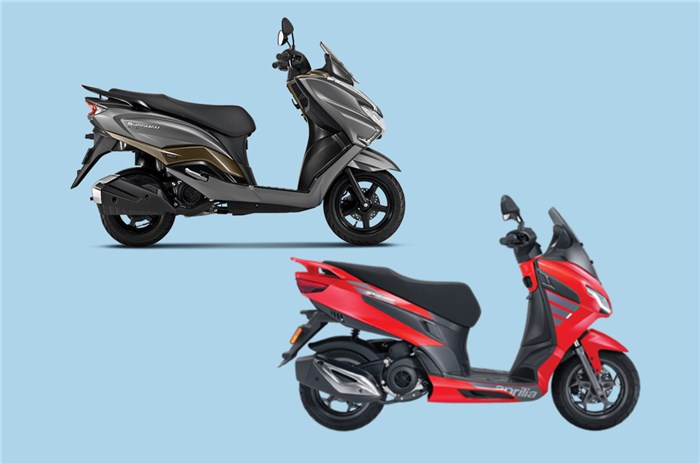 The Aprilia SXR and Suzuki Burgman Street are the only two maxi-styled scooters in India.

Less than a week ago, Aprilia revealed prices for the SXR 125 on its website. The 125cc SXR was expected to go on sale by now, but due to the current scenario, the official launch has been postponed. Aprilia has the specifications for the SXR 125 listed on its website, which is why we’ve decided to compare them to those of its only direct rival in India, the Suzuki Burgman Street.

The Suzuki Burgman Street, meanwhile, makes 8.7hp at 6,750rpm and 10Nm at 5,500rpm. While the SXR makes more power, the Burgman has a slight edge when it comes to torque. Both engines are single-cylinders, air-cooled, fuel-injected, but the Aprilia has three valves per cylinder, while the Suzuki only has two.

Both, the Aprilia SXR 125 and Suzuki Burgman use a telescopic fork and monoshock for suspension. Where the differences are more evident though, are when it comes to the wheel and tyre sizes. The SXR 125 gets 12-inch wheels at both ends with wide 120/70 section tyres. The Burgman, on the other hand, has a 12-inch front wheel, but the rear is a smaller 10-inch unit. The tyres on it are also significantly narrower. The SXR has a much longer wheelbase at 1,361mm, as compared to the Suzuki’s 1,265mm. The Aprilia is also slightly longer and wider than the Suzuki.

The Suzuki is much lighter at 110kg. While Aprilia hasn’t revealed the kerb weight figure for the SXR 125, it’s expected to be quite similar to the 160’s, at around 128kg. For reference, there’s no weight difference between the SR160 and SR125.

The SXR 125 and the Burgman Street use all-LED lighting. These maxi-style scooters are all about their practicality, which means storage spaces are quite important. Not only does the SXR get spacious underseat storage, but it also has a large lockable compartment in the apron. While the Burgman has healthy underseat storage, it makes do with a pocket and small compartment in the apron.

Both scooters also feature the extended footrests for the rider, but the Burgman has the more spacious and usable ones. The similarities don’t end there, both scooters also have windscreens, but neither features any adjustability. Lastly, both of them can also be had with full-digital instrument clusters, but it’s the Suzuki’s that's more informative. The Aprilia has a slightly larger fuel tank, at 7 litres, compared to 5.5 litres on the Suzuki.

While we are still awaiting the official launch, the Aprilia India website has prices for the SXR 125 listed in the booking section. The upcoming scooter has been priced at Rs 1,16,358. The Suzuki Burgman Street costs significantly less at Rs 86,200.

We hope to compare the Suzuki Burgman Street and Aprilia SXR 125 in the real world as soon as we get the chance. Stay tuned to Autocar India for the comparison.