The 2021 MV Agusta Superveloce S is available with an optional racing kit. 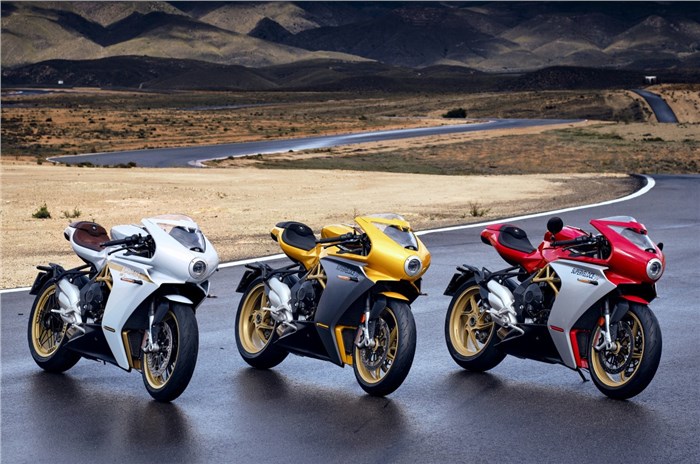 MV Agusta has taken the wraps off the 2021 Superveloce and Superveloce S, that feature new colours and a Euro 5 compliant engine among other updates.

To begin with, MV Agusta has introduced a Euro 5 complaint, 798cc, inline three-cylinder engine that produces 147hp at 13,000rpm and 88Nm at 10,100rpm. Top speed is claimed to be 240kph. The company says that it has also tinkered with the internals by introducing new titanium valve guides with DLC coating to reduce friction. These along with larger injectors and a new oil-cooler help improve fuel economy, says MV Agusta. In addition, the ECU in the 2021 Superveloce has been remapped to offer stronger mid-range grunt while the exhaust has been redesigned as well. The engine is paired to a six-speed gearbox with a third generation up/down quickshifter for smoother and precise gearshifts.

Another major improvement to the 2021 MV Agusta Superveloce is the introduction of IMU based electronics. This brings with it a wider safety net in the form of lean sensitive 8-level traction control and ABS as well as improved wheelie control, significantly improving the safety aspect. As before, there are four ride modes (Sport, Race, Rain and Custom) that can now be accessed via a new 5-inch TFT with Bluetooth connectivity. This feature is available on both the Superveloce and Superveloce S. Speaking of, the S is the more focused version of the MV Agusta Superveloce. It features tubeless, wire spoke wheels, instead of the cast wheels on the standard motorcycle, brown Alcantara seats, pillion seat cowl, ECU for better performance and Arrow exhausts. It is finished in a rather fetching colour, called Surreal White Matt Gold that's exclusive to the S model. The standard Superveloce, on the other hand, is available in Ago Red and Pearl Yellow paint schemes only.

Besides the changes mentioned above, MV Agusta has also tweaked the chassis by adding new frame plates for added stiffness. The fully adjustable Marzocchi USD fork has been tweaked to improve damping control, however, the Sachs monoshock (also fully adjustable) remains the same.